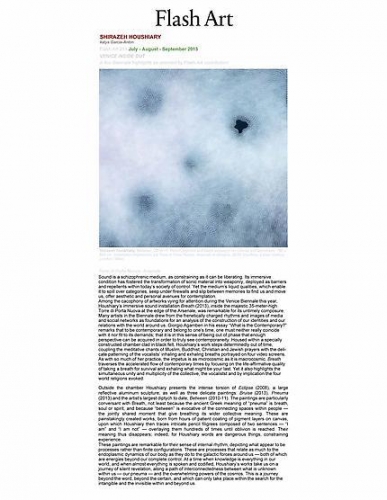 
Sound is a schizophrenic medium, as constraining as it can be liberating. Its immersive condition has fostered the transformation of sonic material into weaponry, deployed as barriers and repellents within today’s soci­ety of control. Yet the medium’s liquid qualities, which enable it to spill over categories, seep under firewalls and slip between memories to find us and move us, offer aesthetic and personal avenues for contemplation.

Among the cacophony of artworks vying for atten­tion during the Venice Biennale this year, Houshiary’s immersive sound installation Breath (2013), inside the majestic 35-meter-high Torre di Porta Nuova at the edge of the Arsenale, was remarkable for its untimely composure. Many artists in the Biennale drew from the frenetically charged rhythms and images of media and social networks as foundations for an analysis of the construction of our identities and our relations with the world around us. Giorgio Agamben in his essay “What is the Contemporary?” remarks that to be contempo­rary and belong to one’s time, one must neither really coincide with it nor fit to its demands; that it is in this sense of being out of phase that enough perspective can be acquired in order to truly see contemporaneity. Housed within a specially constructed chamber clad in black felt, Houshiary’s work steps determinedly out of time, coupling the meditative chants of Muslim, Buddhist, Christian and Jewish prayers with the deli­cate patterning of the vocalists’ inhaling and exhaling breaths portrayed on four video screens. As with so much of her practice, the impetus is as microcosmic as it is macrocosmic. Breath traverses the accelerated flow of contemporary times by focusing on the life-affirmative quality of taking a breath for survival and exhaling what might be your last. Yet it also highlights the simultaneous unity and multiplicity of the collec­tive, the vocalistst and by implication the four world religions evoked.


Outside the chamber Houshiary presents the in­tense torsion of Eclipse (2008), a large reflective alu­minum sculpture, as well as three delicate paintings: Bruise (2013), Pneuma (2013) and the artist’s largest diptych to date, Between (2010-11). The paintings are particularly conversant with Breath, not least because the ancient Greek meaning of “pneuma” is breath, soul or spirit, and because “between” is evocative of the con­necting spaces within people — the jointly shared mo­ment that give breathing its wider collective meaning. These are painstakingly created works, born from hours of patient coating of pigment layers on canvas, upon which Houshiary then traces intricate pencil filigrees composed of two sentences — “I am” and “I am not” — overlaying them hundreds of times until oblivion is reached. Their meaning thus disappears; indeed, for Houshiary words are dangerous things, constraining experience.

These paintings are remarkable for their sense of internal rhythm, depicting what appear to be processes rather than finite configurations. These are processes that relate as much to the endoplasmic dynamics of our body as they do to the galactic forces around us — both of which are energies beyond our complete control. At a time when knowledge is everything in our world, and when almost everything is spoken and codified, Houshiary’s works take us on a journey of silent rev­elation, along a path of interconnectedness between what is unknown within us — our pneuma — and the overwhelming powers of the cosmos. This is a journey beyond the word, beyond the certain, and which can only take place within the search for the intangible and the invisible within and beyond us.