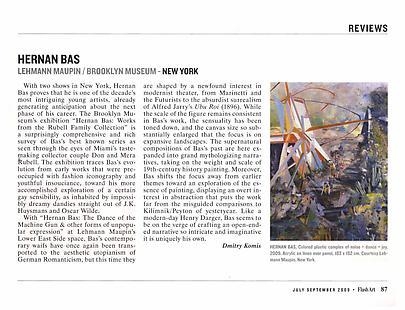 With two shows in New York, Hernan Bas proves that he is one of the decade's most intriguing young artists, already generating anticipation about the next phase of his career. The Brooklyn Museum's exhibition "Hernan Bas: Works from the Rubell Family Collection" is a surprisingly comprehensive and rich survey of Bas's best known series as seen through the eyes of Miami's taste-making collector couple Don and Mera Rubell. The exhibition traces Bas's evolution from early works that were preoccupied with fashion iconography and youthful insouciance, toward his more accomplished exploration of a certain gay sensibility, as inhabited by impossibly dreamy dandies straight out of J.K. Huysmans and Oscar Wilde.

With "Hernan Bas: The Dance of the Machine Gun & other forms of unpopular expression" at Lehmann Maupin's Lower East Side space, Bas's contemporary waifs have once again been transported to the aesthetic utopianism of German Romanticism, but this time they are shaped by a newfound interest in modernist theater, from Marinetti and the Futurists to the absurdist surrealism of Alfred Jarry's "Ubu Roi" (1896). While the scale of the figure remains consistent in Bas's work, the sensuality has been toned down, and the canvas size so substantially enlarged that the focus is on expansive landscapes. The supernatural compositions of Bas's past are here expanded into grand mythologizing narratives, taking on the weight and scale of 19th-century history painting. Moreover, Bas shifts the focus away from earlier themes toward an exploration of the essence of painting, displaying an overt interest in abstraction that puts the work far from the misguided comparisons to Kilimnik/Peyton of yesteryear. Like a modern-day Henry Darger, Bas seems to be on the verge of crafting an open-ended narrative so intricate and imaginative it is uniquely his own.