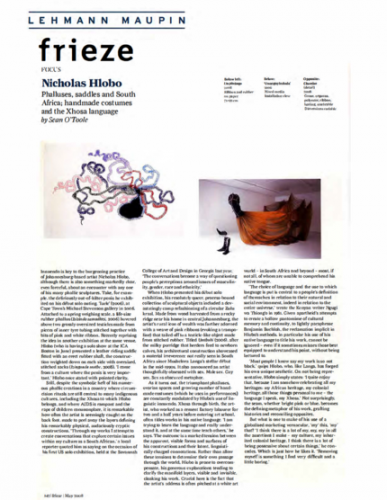 Innuendo is key to the burgeoning practice of Johannesburg-based artist Nicholas Hlobo, although there is also something markedly clear, even forceful, about an encounter with any one of his many phallic sculptures. Take, for example, the deliriously out-of-kilter penis he exhibited on his debut solo outing. “Izele” (2006), at Cape Town’s Michael Stevenson gallery in 2006. Attached to a spring weighting scale, a life-size rubber phallus (isinindo samadlozi, 2006) hovered above to grossly oversized testicles made of inner tyre tubing stitched together with bits of pink and white ribbon. Recently reprising the idea in another exhibition at the same venue, Hlobob (who is having a solo show at the ICA Boston in June presented a leather riding saddle fitted with an erect rubber shaft, the construction weighted down on each side with oversized, stitched sacks (Ixinganda matbe, 2008). “I come from a culture where the penis is very important.” Hobo once stated with pointed clarity


Still, despite the symbolic heft of his numerous phallic creations in a country where circumcision rituals are still central to many indigenous cultures, including the Xhosa to which Hlobo belongs and where AIDS is rampant and the rape of children commonplace, it is remarkable how often the artis is seemingly caught on the back foot, made to peel away the laters of defining his remarkably physical, audaciously cryptic constructions. “Through my works I attempt to create conversations that explore certain issues with my culture as a South African,” a local reporter quoted him as saying on the occasion of his first US solo exhibition, held at he Savannah College of Art and Design in Georgia last year. “The conversations become a way of questioning people’s perceptions around issues of masculinity, gender, race and ethnicity.”


When Hlobo presented his debut exhibition, his resolutely queer, process-bound collection of sculptural objects included a devastatingly camp refashioning of a circular Zulu kraal. Made from wood harvested from a  rocky ridge near his home in central Johannesburg, the artists’ rural icon of wealth was further adorned with a weave of pink ribbons (evoking a trampoline) that tailed off to a testicle-like object made from stitched rubber. Titled Umtbubi (2006) after the milky porridge that herders feed to newborn calves, his architectural construction showcased a material irreverence not really seen in South Africa since Moshekwa Langa’s stellar debut in the mid-1990s. It also announced an artist thoughtfully obsessed with sex. Male sex. Gay sex. Sex as obscured metaphor.


As it turns out, the triumphant phallused, ovarian spaces and growing number of hand made costumes (which he uses in performances) are constantly modulated by Hlobo’s use of linguistic innuendo. Xhosa through birth, the artist, who worked as a cement factory laborer for two and a half years before entering art school often titles works in his native language. “I am trying to learn the language and really understand it, and at the same time teach others,” he says. The outcome is a marked tension between the apparent, visible forms and surfaces of his contractions and their latent, linguistically charged connotations. Rather than allow these tensions to determine their own passage through the world, Hlobo is prone to overcompensate, his generous explanations tendon to clarify the manifold layers, visible and invisible, cloaking his work. Crucial here is the fact that the artist’s address is often pitched in a white art world—in South Africa and beyond—most, if not all, of whom are able to comprehend his native tongue.


“The choice of language and the use to which language is put is central to a people’s definition of themselves in relation to their natural and social environment, indeed in relation to the entire universe,” wrote the Kenyan writer Ngugi wa Thiong’o in 1981. Given apartheid’s attempts to create a hollow pantomime of cultural memory and continuity, to lightly paraphrase Benjamin Buchloh, the reclamation implicit in Hlobo’s methods, in particular misuse of native language to title his work, cannot be ignored—evening is sometimes misses those best equipped to understand his point, without being lectured to.


“Most people I know say my work is not black,” quips Hloobo, who, like Langa, has fired his own unique aesthetic. On not being representative, Hlobo simply states: “I quite enjoy that, because I am somehow celebrating all my heritages, all those things personal to me—the language I speak, my Xhosa,” Not surprisingly, the seam, whether bright pink or blue, becomes the defining metaphor of his work, grafting histories and reconciling opposites.


But what is one to make of his use of a globalized marketing vernacular, “my” this, “my” that? “I think there is a lot of my, my, my in all the assertions I make—my culture, my inherited colonial heritage. I think there is a lot of being possessive about certain things,” he concedes. Which is just how he likes is. “Removing myself is something I find very difficult and a little boring.