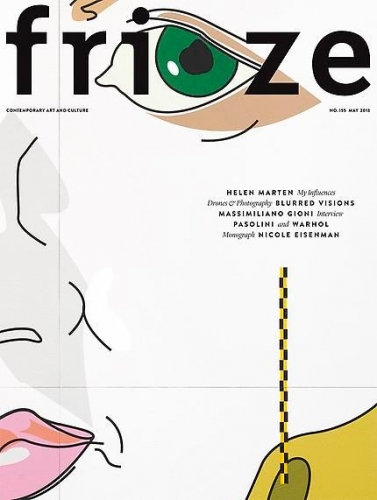 Twenty years ago the Cold War was only just over, AIDS wasn’t ‘cured’ and Bill Clinton had just been inaugurated as US president. In smaller news, museum admission badges created a mini-crisis in New York. The pins were emblazoned with the words ‘ever wanting’, ‘imagine’ and ‘white’, though one of them put the words together: ‘I can’t imagine ever wanting to be white.’ Two decades on, I wonder what all the fuss was about. Whose delicate sentiments were really offended, or was the backlash latent racism? These badges were pinned to visitors’ chests, the museum in question was the Whitney Museum of American Art, and the exhibition was the 1993 edition of the biennial, a show that was scorned for nearly 20 years: The New York Times called it ‘arid’; in the Village Voice Peter Schjeldahl complained about its ‘politicking’; The New Yorker ran a satirical piece mocking the survey’s pieties. The biennial – curated by Thelma Golden, John G. Hanhardt, Lisa Phillips and Elisabeth Sussman – was deemed sanctimonious, ruled by critical theory and words like ‘identity’ and ‘transgressive’ (Microsoft Office’s spell-check still doesn’t acknowledge the latter).

Now, however, that moment is being re-examined in ‘NYC 1993: Experimental Jet Set, Trash and No Star’ – the subtitle borrowed from Sonic Youth’s eponymous 1994 album. The album, the band’s eighth, doesn’t appear in the show, though the badges – Museum Tags (1993) by Daniel Joseph Martinez – do. They’re affixed to cardboard and framed behind glass, like mounted butterflies. Picture what might have been, had they been pinned onto New Museum visitors who might wear them as they wandered the neighbouring streets of the Lower East Side, an area that was for years largely Latino. As it is, the badges function like a metaphor for how work in ‘NYC 1993’ has been tamed.

Don’t get me wrong; the show – which is curated by Massimiliano Gioni, Gary Carrion-Murayari, Jenny Moore and Margot Norton – is largely great. I could list numerous pieces I love (yes, that simple, uncritical word ‘love’), from Gabriel Orozco’s Yielding Stone (1992), for which the artist – who was then only 30 – rolled his weight in sculpting clay from his studio to a show at the New Museum; or his photo Isla en la Isla (Island within an Island, 1993); to David Hammons’ In the Hood (1993). The latter, a piece of fabric ripped from a sweatshirt, is fierce, suggestive of a hanging, and is still forceful in an age of the New York Police Department’s racial-profiling stop-and-frisk programme. But what’s new to me, seeing it now, is that In the Hood is also a visual pun on the appropriation of ghetto culture.

Hung next to the works by Orozco, In the Hood is in the same gallery as Rachel Harrison’s Green (1992/2011), a playful red-painted assemblage built with everything from a mop handle to a record cover, resin, phone cords, rope, a sock and a key ring. The curators’ insinuation here seems to be that pieces like Hammons’, with its acutely felt anger, would lead to Harrison’s anti-monumentalism. There is a lot of excellent work by women (who make up more than half of the artists in the show), which takes sexuality in a frank and funny way, such as Cheryl Donegan’s video Head (1993), in which she suggestively slurps milk spilling from a juice carton, or Sue Williams’ Are You Pro-Porn or Anti-Porn (1992), an R. Crumb-style drawing that riffs and rages about sexual politics.

Twenty years ago, I was in the Whitney Independent Study Program, and Williams was included in ‘The Subject of Rape’, an exhibition I helped curate. Originally dismissed as academic and theoretical, the show is (to my surprise) name-checked prominently in the wall texts at the New Museum. Lutz Bacher’s video sculpture My Penis (1992) was also in that exhibition: a recording of JFK’s nephew, William Kennedy Smith, ripped from Court TV, plays on a loop; he repeats, ‘I did put my penis,’ wincing before finally saying, ‘in her mouth.’ Charged with rape, Smith was eventually acquitted on all charges. In our time of 24-hour news cycles and Internet celebrities, Bacher’s work now looks prophetic, though the way she created a readymade of that moment also remains powerful, appropriating and shifting the meaning of a man talking uncomfortably about his penis.

Patricia Cronin’s two series of Polaroids, ‘Boys’ and ‘Girls’ (both 1993), have a sweet playfulness, though the girls appear to have sex with a poster of Madonna, the boys with a televised George H.W. Bush. Janine Antoni crossed durational performance and portraiture in Lick and Lather (1993), taking 14 neoclassical portrait busts of herself, each made of chocolate or soap, and then eating and washing them. The early 1990s was a moment when women were pushing boundaries even as they revisited more traditional techniques, as Nicole Eisenman did, and – seeing them here in the New Museum – the work all seems less ‘arid’ than I recalled. Perhaps that’s the softening of time?

Even in death there was humour, as in Gregg Bordowitz’s video Fast Trip, Long Drop (1993), with its dark cackling and forthright discussion of dying at a moment before there was a viable treatment for AIDS. Death is the theme of Derek Jarman’s moving film meditation Blue (1993), completed a year before the artist died, and Andres Serrano’s AIDS morgue shots (‘The Morgue’, 1992). The latter are hung across from paintings by John Currin and Elizabeth Peyton. In this manner ‘NYC 1993’ partly attempts to point to where art was going, but Currin’s sick women in bed (both titled Girl in Bed, 1993) serve only to domesticate the men in the morgue.

In another gallery (which I nicknamed ‘the death room’), the installation is beautiful and moving, with Rudolf Stingel’s orange carpet (Untitled, 1991/2012), Robert Gober’s Prison Window (1992) and Kristin Oppenheim’s haunting Sail On Sailor (1993), a chanted line from a Beach Boys song that twists it to sound like a dirge for a death at sea. Félix González-Torres’ grainy photos of birds in flight dominate two walls, and his string of lights dangles from the ceiling. The work all goes together so well, it looks like one piece – and like too much curatorial intervention. Originally designed as billboards, the birds seem caged in the museum; at the very least, their meaning is altered. Some of their power would perhaps have been lost on the city streets, but it would have been more fitting. So, too, with the posters In Honor of Allen R. Schindler (1993) by Bureau (Marlene McCarty and Donald Moffett), which are named for a gay man who was beaten to death by a fellow Navy shipmate a year earlier. They were originally wheat-pasted illegally on 42nd Street; in today’s sanitized and upscale New York, wheat-pasting them is still apt. Gays may be allowed in the military, but sexual violence remains a rampant problem.

Why this exhibition now? Do we run in 20-year cycles, recuperating the past? Has the art world veered so far towards money that people crave the meaning and politics of the early 1990s? The 1993 Whitney Biennial was lauded in many reviews of last year’s edition and, in that weird reprise of tragedy as farce, ACT UP’s saga is to become a mini-series on US network television, while many Republicans now support gay marriage. You can almost look at ‘NYC 1993’ as a marker of how far we’ve come. There’s also a decided feeling of nostalgia to the show, for a mythic New York that never really existed. Or, if it did, brought with it its share of pain. That’s what I thought seeing the inclusion of Larry Clark, whose work in the show partly bends the curators’ own rules by including stills from Kids (released in 1995 not 1993) as well as later skateboard decks paired with Clark’s own steel door from his apartment, emblazoned with stickers and exhibited in 1993 at Luhring Augustine. The show seems a kind of dying gasp for New York’s role as the presumed centre of the art world, hinted at here by the inclusion of artists like Jason Rhoades from Los Angeles and Sarah Lucas and Gillian Wearing from London.

Something else still rankles. The New Museum lobby is emblazoned with Martinez’s slogan – ‘In the rich man’s house the only place to spit is in his face’ – which was offered as an alternative to the 1993 biennial. Here it is installed as script on the café’s interior glass wall. What would it have meant for it to be on the exterior of the museum, an institution that has been instrumental in gentrifying the Bowery? Or, say, Rirkrit Tiravanija’s Untitled (1271) (1993), his canoe with noodles? They’re being served up for lunch here, each day by the bookshop, on the same Bowery that was once home to so many soup kitchens and flophouses. Most poignant is the exhibition’s best piece, Nari Ward’s Amazing Grace (1993). It’s in a raw space next door where more than 300 soiled strollers found on the street are roped together in the shape of an ark, over which gospel singer and civil rights activist Mahalia Jackson sings the hymn for which the piece is named, a hymn written about slavery. The installation touches on birth, renewal and the homeless. But step outside into the bright light of day, and men spill out of the Bowery Mission. I am sure the curators were aware of the proximity. How could they not be? They also must have been aware that the more things change, the more they stay the same.