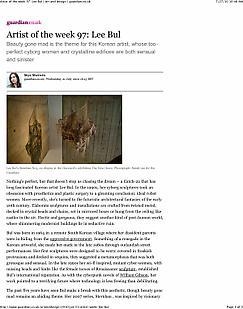 Artist of the week 97: Lee Bul
Beauty gone mad is the theme for this Korean artist, whose too-perfect cyborg women and crystalline edifices are both sensual and sinister

Nothing's perfect, but that doesn't stop us chasing the dream – a Catch-22 that has long fascinated Korean artist Lee Bul. In the 1990s, her cyborg sculptures took an obsession with prosthetics and plastic surgery to a gleaming conclusion: ideal robot women. More recently, she's turned to the futuristic architectural fantasies of the early 20th century. Elaborate sculptures and installations are crafted from twisted metal, decked in crystal beads and chains, set in mirrored boxes or hung from the ceiling like castles in the air. Hectic and gorgeous, they suggest another kind of post-human world, where shimmering modernist buildings lie in seductive ruin.

Bul was born in 1964 in a remote South Korean village where her dissident parents were in hiding from the oppressive government. Something of a renegade in the Korean artworld, she made her mark in the late 1980s through outlandish street performances. Her first sculptures were designed to be worn: covered in freakish protrusions and decked in sequins, they suggested a metamorphosis that was both grotesque and sensual. In the late 1990s her sci-fi inspired, mutant cyber-women, with missing heads and limbs like the female torsos of Renaissance sculpture, established Bul's international reputation. As with the cyberpunk novels of William Gibson, her work pointed to a terrifying future where technology is less freeing than debilitating.

The past five years have seen Bul make a break with this aesthetic, though beauty gone mad remains an abiding theme. Her 2007 series, Sternbau , was inspired by visionary architect Bruno Taut's proposals for a crystalline city in the Alps, which date from 1917; darkly sparkling, chandelier-like hanging sculptures sprawl outwards, laden with out-of-control décor. An installation from the same year, Heaven and Earth, explores her own country's embattled modernisation: in a scruffy, white-tiled bathroom resembling a torture chamber, a bath is filled to the brim with foul-smelling black goop. Reflected in this well of horrors is an ice-white sculpture of Baekdu mountain, the mythical birthplace of the Korean nation. Luxurious and sinister, Bul's art mines a terrible beauty that seems to stretch endlessly into past and future, grimly dehumanising and forever compelling.

Why we like her: Bul's karaoke pods, shown at New York's New Museum in 2002, looked like a cross between a space-age race car and a coffin: sound-proofed, self-enclosed worlds where gallerygoers could belt out a tune, all alone.

Smell of success: Bul's New York debut at the prestigious Moma was forced to close after just a few days when staff complained about the pong – her work was composed from be-sequinned dead fish.

Renaissance girl: The artist attributes her mix of art and science tothe experiments of Leonardo da Vinci, whose work she claims she first encountered when she was six.

Where can I see her? Bul's work is included in The New Décor, at London's Hayward gallery until 5 September 2010.