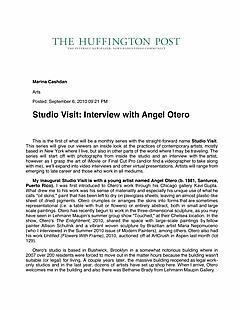 This is the first of what will be a monthly series with the straight-forward name Studio Visit. This series will give our viewers an inside look at the practices of contemporary artists, mostly based in New York where I live, but also in other parts of the world where I may be traveling. The series will start off with photographs from inside the studio and an interview with the artist, however as I grasp the art of iMovie or Final Cut Pro (and/or find a videographer to take along with me), we'll expand into video interviews and other virtual presentations. Artists will range from emerging to late career and those who work in all mediums.

My inaugural Studio Visit is with a young artist named Angel Otero (b. 1981, Santurce, Puerto Rico). I was first introduced to Otero's work through his Chicago gallery Kavi Gupta. What drew me to his work was his sense of materiality and especially his unique use of what he calls "oil skins," paint that has been left to dry on plexiglass sheets, leaving an almost plastic-like sheet of dried pigments. Otero crumples or arranges the skins into forms that are sometimes representational (i.e. a table with fruit or flowers) or entirely abstract, both in small and large scale paintings. Otero has recently begun to work in the three-dimensional sculpture, as you may have seen in Lehmann Maupin's summer group show "Touched," at their Chelsea location. In the show, Otero's The Enlightment, 2010, shared the space with large-scale paintings by fellow painter Allison Schulnik and a vibrant woven sculpture by Brazilian artist Maria Nepomuceno (who I interviewed in the Summer 2010 issue of Modern Painters), among others. Otero also had his work Untitled (Flowers With Frame), 2010, auctioned off at ArtCrush in Aspen last month (lot 129).

Otero's studio is based in Bushwick, Brooklyn in a somewhat notorious building where in 2007 over 200 residents were forced to move out in the matter hours because the building wasn't suitable (or legal) for living. A couple years later, the massive building reopened as legal work-only studios and in the last year, dozens of artists have set up shop here. When I arrive, Otero welcomes me in the building and also there was Bethanie Brady from Lehmann Maupin Gallery.

Marina Cashdan: You received a scholarship to the School of the Art Institute of Chicago (SAIC), where you received you're BFA and MFA. What was that experience like, having had spent your whole life in Puerto Rico until then?

Angel Otero: SAIC gave me a beautiful scholarship and I left a lot of things in my past in Puerto Rico. I had a job there -- I was an insurance agent -- and I was in the University of Puerto Rico studying in Humanities and specializing in painting, that's how they phrased it. I got there in January. I had never seen snow before and it was freezing, I didn't have friends and my English wasn't the best. And my history of knowledge of contemporary art was very vague.

MC: But having taken a lot of art history and art theory courses, you must have had an interesting perspective -- I mean, contemporary art is a regeneration of art history in some sense, yes?

AO: In the beginning of the semester, a professor in one class asked the students to tell the class our name and a contemporary artist that you followed a lot and I said Jackson Pollock and Willem de Kooning and everybody started to laugh and I was so embarrassed [he laughs]. And I remember the professor saying, 'Angel, how does it feel to live in the '50s, my friend?' My art education in Puerto Rico was very vague and my parents didn't know anything about art.

MC: Can you talk to me a little bit about the foundation of your practice, or your approach to artmaking, in a general sense, as well as your studio habits?

AO: I'm a workaholic; I love being the studio. I work every day until late at night. I really try to be ambitious in my work and experiment with materials. If I'm not here, I go to Strand and get old books on art. They have a different sensibility. [He picks up books along his worktable -- Picasso, Velazquez, Van Gogh...]

MC: So let's walk around the studio.

Angel has a pile of photos scattered around various books on his worktable in the center of the gallery.

AO: I'm working a lot with photos and personal memories. I've always said that I didn't grow up with art but I wanted to see what I was surrounded by then that I would consider art now.

[He picks up a photo of his childhood home where his grandmother raised him.]

See the fence and the balcony, the abstract patterns and different details that I can confront. ?[He shows me another photograph.] I was born right on this beach. Then my mother constructed a house for my grandmother, so I constructed these stairs over here to represent that. [He points to the beginning phases of a work, a set of stairs that he has built.] You see the work is always based on something very specific.

MC: And then this alter work?

AO: It's based on the shrine outside my Grandmother's house. It has a Virgin Mary and a San Sebastian is in the house.

MC: Is religion a big part of your life or was it when you were being brought up?

AO: It was all around me as a child; my grandmother is super religious. I connect to it in a different way. I'm not devoted but I have a lot of respect for religion and faith. My grandmother collected these little figurines, so I use a lot of these elements.

MC: You have both elements of classical influences and abstraction as well. There seems to be some remnants of AbEx influences in your work. Am I wrong?

AO: I've always been a big fan of oil paint, back from the New York school and all those guys. For me, growing up art was painting landscapes, like still lifes or a mountain, and I remember a guy [in Puerto Rico] asked me 'Do you know of Jackson Pollock,' and he was like, 'He's one of the most famous artists in the world; Pollock, Picasso, Dali...' and he showed me images of Pollock painting [in a book] and it shocked me. It felt very liberal and free and that the world accepted that as art, that intrigued me. Abstraction is a very personal part of my relationship to art, you know in this case I was trying to give a reference to San Sebastian but mostly when I do figures, like those abstract figures, it's not me trying to recreate something that's realistic or figurative. It's like me treating abstraction figuratively, instead of making something figurative abstract. I introduce abstraction a lot in a narrative or figurative work.

MC: So in what way is it narrative, a personal narrative?

AO: Yeah it's more of a personal narrative, as opposed to trying to tell the story of San Sebastian. The narrative refers to my home and my past.

MC: Can you talk about the images you use as references? ?[Otero has photocopies and lists and notes taped up to a column next to the work.]

AO: This is my first painting in a museum, next to a Polke, in Chicago [he points to a photocopy]. It was the most beautiful feeling! ?But I brainstorm with images and notes.

[Otero goes through his sketches and explains his lists, all written in Spanish: directions to himself on the way he wants the oil skins to be displayed. He refers to the practice as "painting", even though he isn't dipping a brush into paint and applying the brush to the surface.]

MC: When and how did you first develop or discover "oil skins"? I mean the skin forms on the palette after you leave it overnight, right? Did you just find that and run with it?

AO: You're not far from how it started. When I didn't like a painting, I would just scrape it out. Oil paints are so expensive and when you're in school and you're broke you don't want to just throw that out. So I would put the scraped oil paint on the table. You know, a lot of artists do that, like Franz West does it; a lot of people do it. And you always have a big mountain of dried oil paint. So one day, just brainstorming in the studio, I took some of that paint and put it on some wet paint that I had--just a random action--and I liked it. And then when I covered that dried paint with spray paint, it almost looked like tin foil. I thought it was a beautiful game of illusion. So I started just cutting dried paint and painted it so that it looked like aluminum and started making flowers from that. And they were with oils, so that was perfect. And I realized that there was a way to experiment with that on a lot of levels.

I've had friends tell me 'Hey man, you can do that with acrylic; it's a lot cheaper' but I think it's about oil, it's about oil painting, the history.

MC: And now you've developed a technique where you make the skins by layering the paint on plexiglass and then letting it dry. Can that be tricky?

AO: Yeah, it's challenging. Sometimes when we lift it up [from the plexiglass] it will just rip apart.

MC: So you do this all on the floor obviously, and what do you use to scrape the paint?

[Otero takes out a long metal device that has been specially made for 'scraping skins'!]

AO: It's a process that's very slow, otherwise you just break the whole thing and I want this to look like a whole skin instead of just small pieces.

MC: What happens when it doesn't work as you had planned?

AO: With the skins and [materials like] resin being so challenging, you kind of encounter these moments that are so surprising to you. They can be very bad moments but at the end they can be the most interesting part of a work. This wasn't supposed to be like this [Otero points to a section of a massive vibrant yellow painting that sadly can't be pictured, per Lehmann Maupin's request, as I believe it will be going to a collector] or this representation of a table like it's falling. Miguel [Otero's assistant] accidentally folded it and this underneath is glue, like to trap mice, and I was screaming. But what happened was that I took other skins and began placing them and filled it up and then I thought it was perfect. But funny, when you come up with something, you have a blurry idea of what the piece is going to look like and you have a gut sense that it's going to be a great piece. But then it just changes and you never expected it to be what it is.

AO: For me, it's very passionate. It's a battle.

MC: Your studio is pretty special.

AO: I know. I always dreamed of having it! Six years ago I was in a suit selling insurance and painting at night. I grew up with the idea that if you wanted to be an artist, you'll starve to death. Whenever I go down to Puerto Rico, people say, 'I hear that you're doing so well, what are you doing?' and I'll say, 'I'm painting.' And they'll say, 'Oh you're still painting, but what else?' It's so funny, they still don't believe it. My family still isn't sure that I'm making money out of art. They get scared a lot.