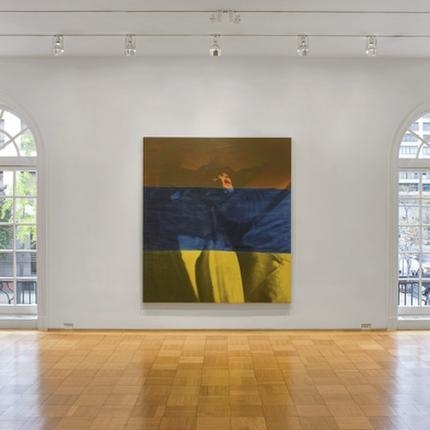 For his latest exhibition at Skarstedt Gallery, David Salle reached back to 1992, when he had already made a name for himself in the 1980s as a conceptual multimedia artist, exploring the relationship between painting, photography, and improvised performance. His work often involved women just barely sexualized, their bodies used as much for sensual merit as for achieving the disorienting pastiche typical of his compositions.

Plucked from that year are "Ghost Paintings," a series of photographs capturing Salle's longtime model, the dancer and performer Beverly Eaby, in varying spontaneous contortions beneath a rumpled white sheet (like a ghost!). As she writhed around in his studio, Salle took photographs of her from different angles. The images are alternatively figurative and abstract; Eaby is visible in a few, but in most, her form is swallowed in crinkles of fabric. Salle had them each printed on three strips of dyed photosensitized linen, sewn together to make a sort of flag. The 13 resulting pieces, printed on cloth canvases, conflate photography and painting.

There's no telling why Salle's 1992 self elected to put the images in storage, where'd they remain for 20 years, nor is there a sure explanation for why Salle, on a whim, took one out to show his friend Olivier Clement, who then showed it to Janine Mileaf, The Arts Club of Chicago's director, who arranged for their first public exhibition this past summer. Salle also showed them to Per Skarstedt, owner of the eponymous Upper East Side gallery, where they will be on display through December 21.

Mileaf, in the catalogue's introduction, argues that the paintings are not only key to Salle's trajectory circa the early 1990s, but that "they emphasize the collision of media and point to a new way to understand Salle's larger practice." She goes on to contend that "Ghost Paintings" indicate the importance of improvised performance in Salle's work.

RACHEL SMALL: Can you tell me about how you made these photographs? What was the initial inspiration?

DAVID SALLE: I had been using a material—a very fine linen coated with photo emulsion—since about 1980. You can't get it anymore—the one company that made it is out of business. The painter Lynton Wells turned me on to it—he had been making paintings based on the material's ability to photographically capture some instant in time that could also be painted on and presented as a painting, not as a photograph. It was all about the material—it was both painting support and actual photographic light and shadow. The image wasn't printed—this is long before digital printing—it emerged in the chemical bath just like a photograph. Anyway, I'd been using this material to make small details, insets, that were elements of much larger compositions. At a certain point I wanted to see if they could become standalone paintings. In fact, I did made one or two things like that early on, around '82 I think, but I hadn't pursued the possibilities.

SMALL: How do the final works differ from your original vision for them?

SALLE: I'm not sure I had any particular "vision" for them—I didn't know what the hell they were going to be—but the images did look pretty much as I had imagined them in my mind's eye.

SMALL: Which of your influences from the early '90s, if any, play out in these photographs?

SALLE: I think they have something in common with the black and white cinematography of early New Wave movies—early, primitive Raoul Coutard photography for Godard's movies in the early '60s. Very early Truffaut, even Jean Vigo before them. The film stock then was lower contrast, and Coutard rarely bothered to light a scene—hence the even lower contrast. It became its own kind of glamorous, but it was as far away from Hollywood noir lighting as you could get.

SMALL: How did you orchestrate them? What was your process, exactly?

SALLE: The paintings are the result of a long working relationship with a woman named Beverly Eaby; at that point, she had been modeling for me for some 10 years. She was a performer—a dancer and entertainer—and we had an easy, improvisational way of working together. I would put on music and she would move around, sometimes in costumes or whatnot. One day I covered her with a sheet and asked her to move around under it—sticking out her arms and legs to make shapes under the cloth. I used a strong side lighting to accentuate the light and shadow of the fabric, and I moved around and caught the shapes with an Instamatic camera—the only kind I ever used in those days. I had in mind the way a kid will put a sheet over his head and make a "ghost"-like shape. Hence the title, "Ghost Paintings."  I used to have my film developed at a cheap lab; they made simple four-by-five machine prints in lieu of contact sheets. Those little prints, with all the dust and imperfections, became the paintings.

SMALL: What did you want them to communicate?

SALLE: I didn't have to think about it too consciously–I knew it was all there. I had already been involved with all those notions for some time. The last piece of it to come together was the color. Once the three panels were sewn together by a sail maker around the corner from my studio in Tribeca, and stretched, they looked like they could be flags, or banners. That's when the color came into it—I'd long been interested in how you choose colors for a flag. I wanted to see how much color the image could support and still retain its quality as pure image.

SALLE: I never think in those terms—or rather, it's hard to put into words that mean anything.

SMALL: What were your your first thoughts upon viewing them again, after so long?

SALLE: All sorts of adjectives come to mind—sets of paired near-opposites like "frothy" and "gravitas,"  or "whipped cream" and "stinging, bracing"—I'm happiest when I feel that several almost opposing sensations are present at the same time. I think these particular works are just about airtight in that regard.

SMALL: Where exactly have they been since 1992? How did you rediscover them?

SALLE: I put the whole lot in storage and forgot about them. It's been a busy 20 years! About a year ago, on a whim, I pulled one out and showed it to a friend of mine, Olivier Clement, who I know likes photography; he worked on my one show of photographs at the old Bob Miller Gallery 20 years ago. Anyway, Olivier sort of flipped over them, and he showed them to Janine Mileaf at the Arts Club of Chicago, who asked to show them at her place. They have a very refined Miesian building—a real beauty—and it turned out to be a perfect fit for the pictures.  When Per Skarstedt saw them in the studio, it was like the proverbial light bulb going off; he wanted to show them also. His gallery is now presenting the show that debuted in Chicago last spring. The spaces of his gallery are similarly congenial—just the right scale.

SMALL: How do you imagine this series to fit into your oeuvre overall?

SALLE: Janine Mileaf frames it quite well in her catalog introduction—this relationships between the artist, model, camera, performance, time, and painting. These are all the things I've been involved with from the beginning—the special nature of the painting surface, that place where all these temporal things are fixed, like a fly in amber. These paintings are perhaps the clearest embodiment of the reciprocity between painting and performance—you can't have one part without the other.

SMALL: Looking at them over 20 years after they were made, do you notice anything new about them? Is there anything that you feel, now, that you'd want to change?

SALLE: I can't think of anything I would do differently. I like the way that some of them almost look like mountains, or have the verticality of Chinese landscape painting. They seem to repay serious looking.

Interview Magazine
Back to Top