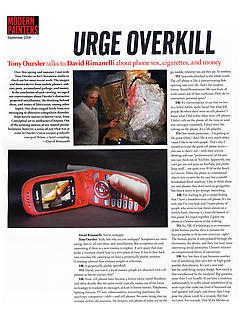 MONEY
TO: I'm shooting footage of the Queen tomorrow.
DR: Really? You mean THE queen - Elizabeth II?
TO: Yes and no. This queen is perfect. This actress is not royalty as far as I know but plays royalty on TV. In my piece she plays the Queen on a pound note.
DR: How many pounds?
TO: She gets around; now I'm shooting the 10-pound note, which is really cool, and transparent when you hold it up to the light, with a watermark. I like the 10-pounder because you get the Queen, a hummingbird, and Darwin is on the flip side-what a threesome. Money is godlike in the culture today, moving from hand to hand exacting twists of fate.
DR: I want some ice cream...Money always smells of divinity or diabolism. The motto pecunia non olet seems rather dubious. Vague memory of some Mary Kelly preach-piece, pecunia oIet, ergo money does smell. And smells nasty, presumably. I saw some cable documentary on, uh, drugs, and some guy at the DEA was explaining that many, many bills contain trace amounts of cocaine.
TO: Money should talk, probably will in the future.
DR: Success-is-in-you.com or something like that. People who say they don't measure success by how much money you make are liars. I hate that.
TO: You walk through the valley of failure and if you make it through there's a perfect you waiting. I think that's what we should call the show: "The Perfect You."
DR: That's a good idea. Well, you know we're always supposed to be testing ourselves against some kind of ideal. Which is, you know ... Let's just say it typically leads to disappointment, or worse.
TO: Perfection starts in the details. You have to start small, look clearly at the little things, viruses, body parts, wallpaper, pills, give them all the importance they deserve.
DR: What about the big picture?
TO: You're lost in the details - that is the big picture. In this exhibition, you have all these details up in your face and you have to find your own way. You're psychologically scale shifted, you paint the big picture yourself. It's a therapeutic model.
DR: How do I press delete on this thing?
TO: I want a Red Bull.
DR: Want, want, want.
TO: Delete, delete, delete .

Tony Oursler's work is on view at Lisson Gallery, London, through Oct. 3.