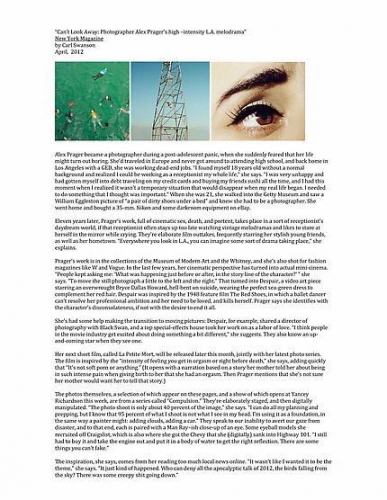 
Alex Prager became a photographer during a postadolescent panic, when she suddenly feared that her life might turn out boring. She’d traveled in Europe and never got around to attending high school, and back home in Los Angeles with a GED, she was working dead-end jobs. “I found myself 18 years old without a normal background and realized I could be working as a receptionist my whole life,” she says. “I was very unhappy and had gotten myself into debt traveling on my credit cards and buying my friends sushi all the time, and I had this moment when I ­realized it wasn’t a temporary situation that would disappear when my real life began. I needed to do something that I thought was important.” When she was 21, she walked into the Getty Museum and saw a William Eggleston picture of “a pair of dirty shoes under a bed” and knew she had to be a photographer. She went home and bought a 35-mm. Nikon and some darkroom equipment on eBay.

Eleven years later, Prager’s work, full of cinematic sex, death, and portent, takes place in a sort of receptionist’s daydream world, if that receptionist often stays up too late watching vintage melodramas and likes to stare at herself in the mirror while crying. They’re elaborate film outtakes, frequently starring her stylish young friends, as well as her hometown. “Everywhere you look in L.A., you can imagine some sort of drama taking place,” she explains.


Prager’s work is in the collections of the Museum of Modern Art and the Whitney, and she’s also shot for fashion magazines like W and Vogue. In the last few years, her cinematic perspective has turned into actual mini-cinema. “People kept asking me: ‘What was happening just before or after, in the story line of the character?’ ” she says. “To move the still photograph a little to the left and the right.” That turned into Despair, a video art piece starring an overwrought Bryce Dallas Howard, hell-bent on suicide, wearing the perfect sea-green dress to complement her red hair. Despair was inspired by the 1948 feature film The Red Shoes, in which a ballet dancer can’t resolve her professional ambition and her need to be loved, and kills herself. Prager says she identifies with the character’s disconsolateness, if not with the desire to end it all.

She’s had some help making the transition to moving pictures: Despair, for example, shared a director of photography with Black Swan, and a top special-effects house took her work on as a labor of love. “I think people in the movie industry get excited about doing something a bit different,” she suggests. They also know an up-and-coming star when they see one.

The photos themselves, a selection of which appear on these pages, and a show of which opens at Yancey Richardson this week, are from a series called “Compulsion.” They’re elaborately staged, and then digitally manipulated. “The photo shoot is only about 40 percent of the image,” she says. “I can do all my planning and prepping, but I know that 95 percent of what I shoot is not what I see in my head. I’m using it as a foundation, in the same way a painter might: adding clouds, adding a car.” They speak to our inability to avert our gaze from disaster, and to that end, each is paired with a Man Ray–ish close-up of an eye. Some eyeball models she recruited off ­Craigslist, which is also where she got the Chevy that she (digitally) sank into Highway 101. “I still had to buy it and take the engine out and put it in a body of water to get the right reflection. There are some things you can’t fake.”


The inspiration, she says, comes from her reading too much local news online. “It wasn’t like I wanted it to be the theme,” she says. “It just kind of happened. Who can deny all the apocalyptic talk of 2012, the birds falling from the sky? There was some creepy shit going down.”