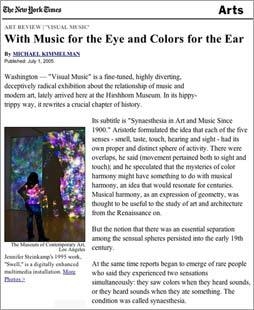 Washington -- "Visual Music" is a fine-tuned, highly diverting, deceptively radical exhibition about the relationship of music and modern art, lately arrived here at the Hirshhorn Museum. In its hippy-trippy way, it rewrites a crucial chapter of history.

Its subtitle is "Synaesthesia in Art and Music Since 1900." Aristotle formulated the idea that each of the five senses - smell, taste, touch, hearing and sight - had its own proper and distinct sphere of activity. There were overlaps, he said (movement pertained both to sight and touch); and he speculated that the mysteries of color harmony might have something to do with musical harmony, an idea that would resonate for centuries. Musical harmony, as an expression of geometry, was thought to be useful to the study of art and architecture from the Renaissance on.

But the notion that there was an essential separation among the sensual spheres persisted into the early 19th century.

It's no coincidence that scientific interest in synaesthesia coincided with the Symbolist movement in Europe, with its stresses on metaphor, allusion and mystery. Synaesthesia was both metaphorical and mysterious. Scientists were puzzled. People who claimed to have it couldn't agree about exactly what they experienced. "To ordinary individuals one of these accounts seems just as wild and lunatic as another but when the account of one seer is submitted to another seer," noted the Victorian psychologist and polymath Sir Francis Galton in 1883, "the latter is scandalized and almost angry at the heresy of the former."

I have come across via the color historian John Gage an amusing account from some years later by the phonologist Roman Jakobson, who studied a multilingual woman with synaesthesia. The woman described to him perceiving colors when she heard consonants and vowels or even whole words:

"As time went on words became simply sounds, differently colored, and the more outstanding one color was, the better it remained in my memory. That is why, on the other hand, I have great difficulty with short English words like jut, jug, lie, lag, etc.: their colors simply run together." Russian, she also told Jakobson, has "a lot of long, black and brown words," while German scientific expressions "are accompanied by a strange, dull yellowish glimmer."

"Visual Music" is full of strange, glimmering yellowish and other colored shapes. What might visual art look like if it were akin to music? That's the question the various artists here asked themselves - a question that goes back to Richard Wagner, the Symbolists' patron saint for his dream of a Gesamtkunstwerk, a universal artwork uniting music and art. Painters like Kandinsky, Frantisek Kupka, Mikhail Matiushin (he was a Russian composer, influenced by Arnold Schoenberg, who like Schoenberg also painted) and Arthur Dove, with whom "Visual Music" begins, elaborated on Wagner's theme. They painted pictures that claimed to have the condition of music - pure abstractions with occasional shapes that resembled staves, musical notes or violins. Through the medium of musical metaphor, in other words, synaesthesia gave birth to abstract art.

This is the show's quite radical, if not altogether original, point: that abstraction's history is not just the familiar sequence of isms (Constructivism, Suprematism, Abstract Expressionism, Minimalism) but also the consequence of a particular idea. The idea is synaesthesia. And its protagonists, while including a few famous names like Kandinsky, were on the whole cultish and now forgotten figures or total outsiders to the art world: they were filmmakers, animators, computer geeks and 1960's psychedelic light show performers.

Blurring high and low, their legacy represented not a corruption or cul-de-sac of traditional modernism but a parallel strand of it, which has made its way, willy-nilly, right up to the present. The show here ends with digitally enhanced multimedia works by Jennifer Steinkamp, Jim Hodges and Leo Villareal.

Organized by Kerry Brougher and Judith Zilczer at the Hirshhorn, and Jeremy Strick and Ari Wiseman at the Los Angeles Museum of Contemporary Art, "Visual Music" originated in Los Angeles, aptly, since much of what's on view consists of films and other moving images, made by artists from California, a few of whom also worked for Hollywood. This was inevitable. Abstract painters in the early 20th century tried to emulate musical attributes, like rhythm, harmony and tonality, but music is temporal. It moves through time. And to suggest temporality or movement in two dimensions via staggered lines, vortices, cones or whatever spatial device, doesn't suffice.

So it fell to experimental filmmakers like Léopold Survage, Viking Eggeling, Hans Richter and Oskar Fischinger to pick up from where Kandinsky left off and devise abstract movies, at first silent, then animating musical scores. The shapes they used were pretty much the same as the ones in the paintings - swirling lines, concentric circles, zigzags, confetti bursts that now pulsed, shimmied and flickered.

A slew of devices and charming gimmicks followed. The color organ was a clunky box with a silent keyboard, prisms, mirrors and a projector that let a player compose an abstract moving picture. Painters like Daniel Vladimir Baranoff-Rossiné and Stanton Macdonald-Wright, one of its inventors, having come up against the limitations of painting, tried their hands at color organs.

New oscilloscopes produced wavy moving patterns that filmmakers like Hy Hirsh could set to jazz or Afro-Cuban music. Len Lye produced cameraless animations by painting straight onto filmstrips. There's a wonderful hand-painted animation by Lye from 1935, "A Colour Box," set to a jaunty tune, which ran as a hit short before feature films in British theaters; it includes, midway through, an advertisement for the postal service, which sponsored Lye, the initials for the post office dancing briefly across the screen.

Among my own favorite confections here are ones by Thomas Wilfred, the Whitneys and Jordan Belson. Wilfred, a Danish lute player by training, born in 1889, contrived an instrument he called the clavilux that produced light displays, which, to modern eyes, resemble lava lamps and Hubble space photos before the fact. From Los Angeles, John and James Whitney exploited nascent computer technology, starting in the 1950's, to compose hypnotic, multiscreen abstract films set to raga and other forms of zone-out music. At the Hirshhorn you can recline in the darkness on huge, cushy ottomans, while the Whitneys' images play retinal games with your eyeballs.

And from San Francisco, Mr. Belson collaborated on polymorphous audiovisual concerts in the late 1950's and early 1960's that set the stage for the era's psychedelic light shows. A few of these, by collectives like Single Wing Turquoise Bird and Joshua Light Show, are screened in a room at the Hirshhorn, minus only the bongs. In turn, such events inspired Mr. Belson toward more mind-bending, kaleidoscopic films suggesting cosmic swirls and mixing different brands of music. Nearly 80 now, he was commissioned by the Hirshhorn to produce a new work for this show, "Epilogue," its lush and misty optics synchronized to a score by Rachmaninoff.

All these swimmy works begin to blend together after a while, but what's remarkable about seeing them in one place is precisely that they do look so similar. I said earlier that the experimental films from the 1920's on used the same vocabulary as the paintings from the turn of the century. Likewise, the newest computer-generated installations. "Visual Music," aside from rewriting history, is also a show about failure - the failure of metaphor, which no technology may overcome.

In all this time, no perfect way to make art into music has been devised. Squiggly lines and pulsing colors approximate music but they can't ever become it. Aristotle was right. The senses do have their own domains. Music is moving in ways visual art isn't and vice-versa, and that's why they're both necessary. Like Wagner's Gesamtkunstwerk, the dream of making one art that's like another is just a utopian fantasy, born of a peculiarly modern impatience with art's limitations and a misplaced notion that, like science, art needs constantly to advance or else become irrelevant.

But art is not science. Its limitations are its virtues. In the meantime it gives us the works here, the best of which are dizzily transporting.