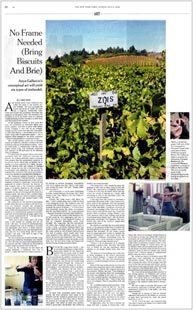 AS the British artist Anya Gallaccio concedes, her work is "not exactly art-fair friendly." She once arranged the leaves and petals of 10,000 red roses into a fragrant, Rothko-like Color Field abstraction that gradually shriveled into potpourri on the gallery floor. She installed a 32-ton block of ice in the boiler room of a disused London pumping station, leaving it to melt away over the course of two months.

At the Sculpture Center in New York this year, she presented an enormous felled tree, bolted together and held in place with cables, briefly bringing it new life as an artwork. Though she has made what she calls "haveable" or collectible objects - cast bronze trees, for example, hung with red porcelain apples - she is happiest when engaged in "an event, a process - kind of being present in a moment in time."

Her current project, under way in Sonoma County in California, adroitly combines her love of process with an actual physical object. "After the Gold Rush," a collaboration with the winemaker Zelma Long, will culminate sometime next summer in 400 half-cases of six different types of zinfandel.

In many ways the project seems even more conceptual than Ms. Gallaccio's previous endeavors. By making zinfandel, which is pressed from grapes that are particularly sensitive to the precise locale where they are grown, she is aiming to create a portrait of a region, the geologically diverse hills and valleys of Sonoma County. Along the way she is documenting the practicalities and subtleties of the process of making wine, a practice that turns out to have a surprising amount in common with making art.

Ms. Gallaccio's project is part of a larger public art endeavor, "Terrain Terroir," in which artists are being commissioned to make work in response to Sonoma's landscape. Conceived and organized by Sandra Percival, the director of New Langton Arts, a San Francisco nonprofit space, it is partly inspired by the writings of M. F. K. Fisher, whose essays used food as a metaphor for the art of living and who lived on a Sonoma ranch. (She died in 1992.) Another inspiration is landscape art, which in Sonoma County has included Christo and Jeanne-Claude's 1976 project "Running Fence."

Ms. Gallaccio, 43, was invited to participate in 2002, when she was a resident at the San Francisco Art Institute. Initially she considered working with apples, another important Sonoma crop. In 2001 she had produced 21 bottles of apple eau de vie to commemorate a project in Switzerland that involved planting heritage apple trees on a remote mountainside. So "I already had an interest in alcohol," she noted.

"Wine tied in quite nicely with a lot of the ideas I had around art making and the art world," she said. "In terms of connoisseurship, there seemed to be a lot of overlap in attitudes and aspirations, plus there's a small collector overlap." Ms. Gallaccio was also fascinated that wine, like art, "is a living thing, and it's unpredictable," she said. "You have to take a risk when you open a bottle."

Ms. Percival put her in touch with Ms. Long, a pioneering California winemaker and consultant. Over the next two years they hammered out the concept, and Ms. Gallaccio, by then back in London, made occasional visits to the site.

Early on, Ms. Gallaccio set her heart on making zinfandel, a California wine that is known - rather like Abstract Expressionism - for having no obvious European antecedents. Part of its appeal was that "there's this suspicion around the wine," she said. "People either love it or hate it."

And technically, it can be quite challenging to make, largely because the grapes don't ripen evenly on the vine, "which to me was really exciting," she said.

Initially Ms. Long wasn't wild about the idea. "I didn't realize quite what a difficult thing I was asking her to do," Ms. Gallaccio said. But working with zinfandel seemed a smart way to examine the nature of terroir - "a French term that essentially means the whole environment that the vine finds itself in," Ms. Long explained - because the grape is so especially responsive.

The focus was really to find locations that we felt would be very expressive, and then to make the wine in a very hands-off fashion, so that its complete personality could come through," Ms. Long said. The five site-specific red wines that resulted would also be used to create a sixth, a perfectly balanced blend that would stand for the whole region. By spring 2005 Ms. Long, calling in a lot of favors, had procured five tons of grapes, which would come from vines planted in five different vineyards. Just before the harvest last September Ms. Gallaccio returned from London to taste the grapes in the field; over the next three weeks she helped with the harvesting, sorting and punch-down.

Because Ms. Long often travels - she is currently developing a range of Bordeaux-style blends for the American market that are being made in South Africa - much of the hands-on nurturing was carried out by another consulting winemaker, Barbara Lindblom, who stayed up many nights tending the vats during the months-long fermentation process. Though Ms. Gallaccio's project doesn't push the envelope in terms of winemaking, it was extremely tricky to produce, Ms. Lindblom said. Because the lots were so small - even for a boutique wine - most of the process had to be carried out by hand. This also meant that the stakes were higher, because the project's conceptual framework left no leeway to eliminate deviant lots from the blend.

"Lots of people have said to me that it could be anything inside the bottles," Ms. Gallaccio noted, "because people probably won't drink the wine. But it was very important to me that it be the best it could possibly be, so there's the desire there."

In early June, somewhat sooner than expected, the wine declared itself ready to be blended, and Ms. Gallaccio quickly flew to California to sample the five wines and to observe the process of creating the blend. The results were good. "The wines all taste very distinct, which is great and I am thrilled," Ms. Gallaccio wrote in an e-mail message.

"The thing that's very wonderful about the outcome is that each of these wines is very different," Ms. Long said in a telephone interview. "I think we'll see that the blend, which will represent the terrain of Sonoma as a whole, adds something to each of the individual wines, but each has its own personality."

A few days later Ms. Gallaccio convened a round-table discussion at Ms. Long's house to explore some of the questions that had intrigued her during the project. Among the participants were Carole Meredith, a professor emeritus of viticulture and enology at the University of California, Davis, who led the team that traced the grape's DNA to Croatia; George Hendry, a nuclear physicist who is now making wine on his second-generation family farm; and the fourth-generation winemaker Ted Seghesio, who committed four tons of his winery's sought-after grapes to the cause.

Ms. Gallaccio said that she was particularly drawn to the question of how best to control the metamorphosis of the grape, a subject that was debated that afternoon. Do you create a great wine by using high-tech science to monitor the grape's environment - the major factor that distinguishes California winemaking from the French variety - or by cleaving to centuries of tradition? What part does intuition play?

"There's a lot of discussion as to whether technology is good or bad," she said, "the same way as within art you get arguments about whether or not people should make their own work."

The process of winemaking also strikes her as being analogous to the artist's interaction with a chosen medium. "I choose the material and have the idea," she said, "but ultimately the process is a kind of dialogue between me and the material."

Some of the wine professionals said that the collaboration had given them a new outlook on a familiar métier, and for Ms. Long the discovery was aesthetic. Before, she said, "I was looking at the grapes and thinking about the winemaking, but Anya was looking at the vines as a whole." After they worked together, she began to see her raw material with new eyes: "They're like little pieces of sculpture. They're incredibly thick and twisted."

Ms. Lindblom noted market parallels. "Part of winemaking is a little bit like art," she said, "in that if you've got a really small volume, it costs an arm and a leg, because it is a rare commodity. And these are really rare. And again, what is delicious is in the eye of the beholder." Many things, she added, contribute to the wine's price, including scarcity, buzz and the story behind it: just as in the art world.

In September, after the wine is bottled, the team will hold a tasting in Geyserville, Calif. There, Ms. Percival will begin selling futures in an attempt to recoup costs, which Ms. Gallaccio estimated will reach $200,000. (Wine futures are wines sold in advance of their release. The winemaker offers a consumer a chance to buy a rare, hotly pursued vintage at a lower price, just as art dealers often sell pre-publication prints.) So far the project has been underwritten by several collectors, most of them in London, who will be repaid with a limited edition of magnum-size bottles when the wine is released.

Ms. Gallaccio expects to produce about 400 half-cases, each containing six standard-size 750-milliliter bottles. (No price has been set.) She is hoping that there will be enough wine left over so that she can be paid with artists' proofs, in the form of half-cases of wine. (So far she and Ms. Long have contributed their time; Ms. Long procured materials and production at cost.)

The wine will be introduced next summer at two tasting dinners, in California and London, which Ms. Gallaccio plans to design with local chefs. "I've never been to a six-course dinner where you only drink red wine, so I would think it's going to be a kind of tricky meal to design," she said.
But she is eager to see how the project will be received, especially in Britain, where many connoisseurs tend to be "a bit sniffy," she said, about zinfandel.

Though she is curious to find out whether collectors will preserve the bottles as artworks, or open them and drink the wine, she knows what she would do.

"At the end of the day," Ms. Gallaccio said, "the wine is there to be drunk. It is a kind of fuel for a moment in time."