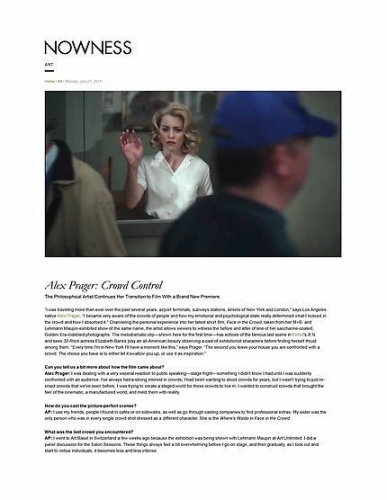 
“I was traveling more than ever over the past several years: airport terminals, subways stations, streets of New York and London,” says Los Angeles native Alex Prager. “I became very aware of the crowds of people and how my emotional and psychological state really determined what I noticed in the crowd and how I absorbed it.” Channeling the personal experience into her latest short film, Face in the Crowd, taken from her M+B- and Lehmann Maupin-exhibited show of the same name, the artist allows viewers to witness the before and after of one of her saccharine-coated, Golden Era-indebted photographs. The melodramatic clip––shown here for the first time––has echoes of the famous last scene in Fellini's 8 ½ and sees 30 Rock actress Elizabeth Banks play an all-American beauty observing a cast of exhibitionist characters before finding herself thrust among them. “Every time I'm in New York I'll have a moment like this,” says Prager. “The second you leave your house you are confronted with a crowd. The choice you have is to either let it swallow you up, or use it as inspiration.”


Can you tell us a bit more about how the film came about?


Alex Prager: I was dealing with a very visceral reaction to public speaking––stage fright––something I didn't know I had until I was suddenly confronted with an audience. I've always had a strong interest in crowds; I had been wanting to shoot crowds for years, but I wasn't trying to just re-enact crowds that we've seen before, I was trying to create a staged world for these crowds to live in. I wanted to construct crowds that brought the feel of the cinematic, a manufactured world, and meld them with reality.


How do you cast the picture-perfect scenes?


AP: I use my friends, people I found in cafés or on sidewalks, as well as go through casting companies to find professional extras. My sister was the only person who was in every single crowd shot dressed as a different character. She is the Where's Waldo in Face in the Crowd.


What was the last crowd you encountered?


AP: I went to Art Basel in Switzerland a few weeks ago because the exhibition was being shown with Lehmann Maupin at Art Unlimited. I did a panel discussion for the Salon Sessions. These things always feel a bit overwhelming before I go on stage, and then gradually, as I look out and start to notice individuals, it becomes less and less intense.