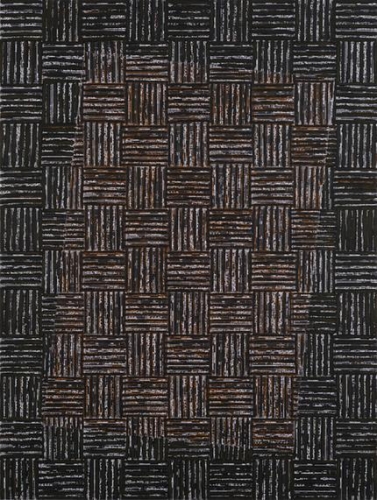 McArthur Binion’s exhibition, Re: Mine, currently at Galerie Lelong (September 10 – October 17, 2015) stirred up a swarm of associations while I was looking at it, and the buzz did not die down after I left the gallery and decided to walk home amidst the late afternoon din of Manhattan traffic and people in a rush to get home.

Let’s begin with the word “Mine” from the title, which implies both what belongs to Binion and what he excavates from his past. In this work he combines two divergent possibilities, abstraction and self-portraiture, but does not make abstract self-portraits. This is just one of the ways he challenges the art world’s habits of thinking.

Lots of writers have rightfully connected Binion’s handmade, methodical, labor intensive, subtle, seductive, and challenging work to Minimalism, but that is only the tip of the iceberg, literally and metaphorically. In order to understand his complicated relationship to Minimalism’s reductive impulse, it is imperative to recognize the varied and innovative ways he has reframed its basic tenets. Instead of adding yet another late example to the Minimalist canon, he persuades the viewer to reconsider the drive towards purity that is basic to our understanding of art during the 1960s and ‘70s, a tumultuous period in American history marked by the Vietnam War, assassinations, and race riots.

Binion once said about his process: “The part I took from Minimalism is that you want to do your own stuff in your own image.” In making work in his “own image,” he exposes the prejudices, privileges and presumptions inhabiting Frank Stella’s famous dictum, “What you see is what you see,” and Andy Warhol’s claim, “Just look at the surface of my paintings, and there I am.” What do these statements mean to a black man growing up under segregation, the struggles of the Civil Rights movement, assassinations of black leaders and sanctioned police brutality? Seen in this context, these observations seem ludicrous and deliberately naïve, if not downright offensive.

In the paintings, which are part of what the artist call his DNA series, suggesting that his art goes deeper than autobiography, Binion uses a paint stick to painstakingly draw more-or-less evenly spaced horizontal or vertical lines, resulting in a grid over what he calls “collaged tiles” or “under surface.”

The tiles are made from laser copies of a photostat of his birth certificate (he was born “colored” in 1946 in Macon, Mississippi); pages from his handwritten phone book from the 1970s, when he lived in New York; and a passport-sized photo of the artist from around the same time. In order to read between the lines that the artist has drawn over each sheet of paper, which have been affixed to board in a grid pattern, I had to practically push my nose into the painting. I went from looking at a grid of more-or-less evenly spaced vertical and horizontal lines to closely reading a photostatic copy of the artist’s birth certificate, and learning that he was born “colored” in the Deep South in 1946, when America was officially separate and unequal. I don’t think I am the only one to receive a jolt when I began sorting through the information contained on Binion’s birth certificate, starting with its material presence of white words written on black paper. In another painting, a grid of the artist’s face multiplied innumerable times under a layer of red sent a shiver through me.

By lining up the sheets horizontally and vertically, and echoing them with a linear grid, Binion elevates this and his other pieces of personal information out of any didactic reading and into the realm of design and abstraction. Binion’s formal mastery, his ability to wring so many possibilities out of his direct and straightforward labor, permeates the works with layers of meaning, beginning with his challenge to the idea that art could be objective and pure, that it could exist in a separate aesthetic realm untainted by life. This is what the mainstream art world has never fully addressed, its narrow understanding of art history and the view that black art and abstraction are mutually exclusive.

On a simple level, Binion has used drawing and collage to layer together personal information and abstract patterns. The paintings are handmade, methodical, with the artist literally pressing his way across the surface, line by line. The connection between manual labor and artistic practice recovers his legacy of growing up in rural Mississippi, one of eleven children, and starting to pick cotton at the age of four. His family, which was part of the second great migration to the north, moved to Detroit, Michigan, to start working in factories when he was five. Binion’s dedication to craft rejects the notion that the hand had to be removed from advanced art. The vertical and horizontal lines can be traced back to scarification and African art, reminding us that Europeans did not invent abstraction, but appropriated it.

Such Eurocentric thinking is what lay behind the entry written by William Rubin about the Afro-Cuban and Chinese artist Wifredo Lam in Dada, Surrealism, and Their Heritage (1968; 2nd edition, 1977), a vintage publication from the Museum of Modern Art, New York: “Wifredo Lam was the first Surrealist to make primitive and ethnic sources central to his art.” Rather than acknowledge Lam’s racial make-up, and his immersion in the Afro-Cuban religion Lucumi, Rubin suggests that Lam, following in the footsteps of Pablo Picasso, appropriated “ethnic sources,” rather than recovered them. A few years later, in Volume II of “Primitivism” in 20th Century Art: Affinity of the Tribal and Modern (1984, Edited by William S. Rubin), Evan Maurer made the following observations:

This was Lam’s greatest synthesis as a Surrealist: He combined a close contact with tribal rituals with the cultural and artistic sophistication of a Western intellectual.

By “Western intellectual,” Maurer meant that Lam thought like a white European. These are just two examples of the long history of aesthetic prejudice black abstract artists have run into.

By changing the color or thickness of his subtly modulated lines, Binion can embed a darker or lighter form (oval or rectangle) within the gridded field. The shift is visceral and optical, one line stopping and another beginning. Is it a geometric path of light cast across the surface? In this regard, the form dissolves the border between the tactile and visual, as well as confounds our ability to spatially locate one plane’s relationship to another. This formal instability speaks to the artist’s status and to society, the awareness that security is an illusion. Along with scarification, the lines can be associated with marking time, furrowed fields and barred windows through which we glimpse something. Is Binion trapped inside his own body or is he bursting through our perception of him? So many tensions, contradictions and ambiguities run swiftly and smoothly through these commanding paintings.

If Minimalism emptied content out of art, as so many have claimed, Binion has brought it back into play. His innovations are acts of recovery, of claiming what might be considered his birthright, part of his DNA, including abstraction. In doing so, he re-envisions history, as well as challenges the view that art history is a tale of progress, a narrative upheld by such venerable institutions as the Museum of Modern Art New York.

I found it nearly impossible to stand still in front of Binion’s work, as I kept moving closer, nearly ending up with my nose in each one. Even where the paintings were modest in scale, measuring 18 x 18 inches, I would lose sight of them because I had gotten so close. By making a painting that pulls the viewer from looking to examining and, in that sense, becoming intimate with it, I sensed another powerful retort to Stella’s dictum. Binion’s reenvisioning of what is possible in abstract painting adds a rich, complex chapter to its long history, and, let me be clear about this, he is not the only black artist to do so.