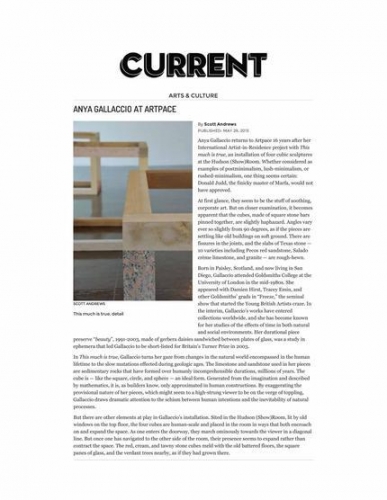 
Anya Gallaccio returns to Artpace 16 years after her International Artist-in-Residence project with This much is true, an installation of four cubic sculptures at the Hudson (Show)Room. Whether considered as examples of postminimalism, lush-minimalism, or rushed-minimalism, one thing seems certain: Donald Judd, the finicky master of Marfa, would not have approved.


At first glance, they seem to be the stuff of soothing, corporate art. But on closer examination, it becomes apparent that the cubes, made of square stone bars pinned together, are slightly haphazard. Angles vary ever so slightly from 90 degrees, as if the pieces are settling like old buildings on soft ground. There are fissures in the joints, and the slabs of Texas stone — 10 varieties including Pecos red sandstone, Salado crème limestone, and granite ­— are rough-hewn.


Born in Paisley, Scotland, and now living in San Diego, Gallaccio attended Goldsmiths College at the University of London in the mid-1980s. She appeared with Damien Hirst, Tracey Emin, and other Goldsmiths’ grads in “Freeze,” the seminal show that started the Young British Artists craze. In the interim, Gallaccio’s works have entered collections worldwide, and she has become known for her studies of the effects of time in both natural and social environments. Her durational piece preserve “beauty”, 1991-2003, made of gerbera daisies sandwiched between plates of glass, was a study in ephemera that led Gallaccio to be short-listed for Britain’s Turner Prize in 2003.


In This much is true, Gallaccio turns her gaze from changes in the natural world encompassed in the human lifetime to the slow mutations effected during geologic ages. The limestone and sandstone used in her pieces are sedimentary rocks that have formed over humanly incomprehensible durations, millions of years. The cube is — like the square, circle, and sphere — an ideal form. Generated from the imagination and described by mathematics, it is, as builders know, only approximated in human constructions. By exaggerating the provisional nature of her pieces, which might seem to a high-strung viewer to be on the verge of toppling, Gallaccio draws dramatic attention to the schism between human intentions and the inevitability of natural processes.


But there are other elements at play in Gallaccio’s installation. Sited in the Hudson (Show)Room, lit by old windows on the top floor, the four cubes are human-scale and placed in the room in ways that both encroach on and expand the space. As one enters the doorway, they march ominously towards the viewer in a diagonal line. But once one has navigated to the other side of the room, their presence seems to expand rather than contract the space. The red, cream, and tawny stone cubes meld with the old battered floors, the square panes of glass, and the verdant trees nearby, as if they had grown there.