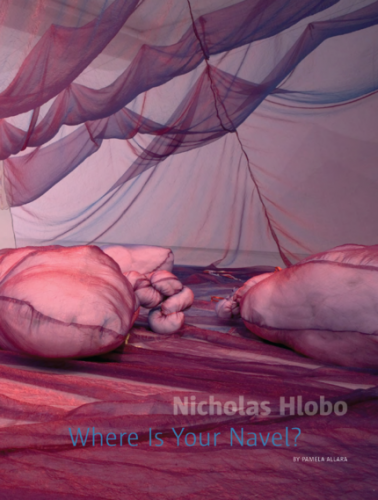 According to South African critic Amy Halliday, contemporary art from the Afri­can continent is "often either excluded from, or uncomfortably assimilated into, an overarching Western narrative:' Nicho­las Hlobo, a young South African sculptor, mined this narrative for his 2008 installa­tion at Boston's Institute of Contemporary Art, where his work was featured as part of the Momentum emerging artists series. Hlobo has been exhibiting internationally since his graduation from the Technikon Witwatersrand in Johannesburg in 2002, effortlessly adapting the vocabulary of international contemporary art to refer­ence his own "uncomfortable assimila­tion" into a globalized culture while main­taining his Xhosa heritage and South African gay male identity. He recently received the prestigious Standard Bank Young Artist Award in Visual Art, a prize that included a year-long touring exhibi­tion with stops at the National Arts Festi­val in Grahamstown and the lziko South African National Gallery in Cape Town, among other venues. This year, he was selected for the Liverpool Biennial (open­ing September 18). He has also won the Visual Arts award in the Rolex Mentor and Protege Art Initiative and will spend the next year working with Anish Kapoor.

Although Hlobo uses a wide variety of disparate materials, from colored ribbons and organza to rubber tire tubing and metal chains, his imagery has remained relatively constant. Technical virtuosity and an expanding formal vocabulary have enabled him to insert his work into the transcultural conversation that character­izes contemporary art today.

When Hlobo was a student in the late 1990s, his teachers required their classes to address a central issue of the new South African democracy-identity. Although Hlobo's hybrid heritage was a central focus of his work, the assignment permitted him to examine his identity as a gay black male within a culture that rejects homosexuality. Whereas the American queer art movement of the 1980s veered between emotional extremes of euphoria and mourning as gay liberation collided with the AIDS crisis, in South Africa during those same years, gay politics took a back seat to ending apart­heid, and any artistic expression of a gay sensibility was muted. Today, even though the liberal constitution assures equal rights for gays, cultural biases have been difficult to dislodge, and many people still believe that homosexuality was imported by white colonists. For his thesis exhibition in 2001, Hlobo crafted inventive objects from cast ceramic, sewn fabric, and paper. Untitled (2001) consists of a fabric and paper anus/ horn of plenty, to which multiple white ceramic casts-erect phalluses and round­ed buttocks-seem hypnotically drawn. Witty and sensuous, Untitled subverts pos­sible preconceptions of a gay-themed art, presenting instead a celebratory ritual.

Hlobo's two-part ICA exhibition, "Vula zib­huqe" (Xhosa for people who keep quiet about wrongdoing), was his first solo show in an American museum. A corner installa­tion, which featured in an opening perfor­mance, marked the entrance to the gallery; in the main space, a monumental hanging sculpture burst through the wall, its second face returning the viewer from the interior to the entrance area. Although the title sug­gested that the show would reference cur­rent political scandals, both in South Africa and the United States, such editorializing was at best oblique Hlobo prefers to work with metaphors capable of bridging his per­sonal frame of reference and viewers' pre­sumed Western mindset. His use of Xhosa to title his pieces is not an affectation or a simplistic device for signaling otherness; instead, it is a means of resisting reductive interpretations, a strategy that requires the viewer to gain at least a passing familiarity with the artist's culture, so that a basis for dialogue about commonalities and differ­ences can be established. Simply put, by using his native language, one that is espe­cially difficult for Westerners to pronounce, Hlobo avoids having his work co-opted into a dominant Western narrative.

The initial, performance-rooted work served as a welcoming introduction to Xhosa culture, as well as to broader aspects of South African life. Thoba, utsa/e umnxe­ba ("to lower oneself and make a call," as a gesture of respect) created an intimate ritual space that referenced the hybrid nature of South African religion, a blend of missionary Christianity and indigenous spiritual traditions. During his performance, Hlobo was seated on an oval nest of impepho, or curry bush, a spice used as incense in Xhosa rituals. His eyes were closed, and every few minutes, he bowed deeply. The very lack of exhibitionism in his modest demeanor reminded the assem­bled art crowd of what is involved in looking at unfamiliar art: namely, a willingness to be contemplative rather than judgmental. The bowing gesture was not without its sarcastic edge, of course-Hlobo was very likely acknowledging his dependence on the influential patrons in the audience.

The solemnity of Hlobo's gesture was further reflected in his handmade costume. The black, pleated coat-dress with its white collar recalled Christian Zionist church robes, often sewn by parishioners for their local priests, as well as judicial robes, Dutch colonial garments, and designer fashions. By implication, the robe pointed out that the power commanded by male authority figures such as judges and priests is so blinding that they never appear to be crossing-over into cross-dressing.

In the midst of such austerity, Hlobo's elaborate headdress made a striking state­ment. It resembled the woolen hats worn by adherents of the Rastafari movement, another hybrid Western and African religion with a significant following in South Africa. Tentacles of braided ribbon ending in 17 embroidered caps branched out from the core of the hat, affixing Hlobo to the walls behind him. Like the ropes of braided hair that Magdalena Campos-Pons uses as sym­bolic ties to her native Cuba, Hlobo's radiating network suggested a process of transnational communication. The oval nest on which he meditated/mediated was significant not only because churches so often serve as emotional homes for impoverished South Africans, but also because in Xhosa culture, a newborn's afterbirth and umbili­cal cord are buried in the village, and the traditional greeting is "lnkaba yakhoiphe ?" or "Where is your navel?" Indeed the largest extension from the cap appeared to be plugged into the floor, reinforcing the metaphor of connection and groundedness.

The few steps from this public entrance space to the main gallery doubled as a jour­ney from public ritual to the private realm of the body. Umphanda ongazaliyo, as its title suggests, is a vessel that never fills up The rubber, ribbon, leather, and organza structure, suspended from the ceiling to just above the floor, resembled a womb or stomach. The reference to bodily organs was unmistakable, and like Louise Bourgeois's Lairs, once "inside" the body, gender dis­tinctions became blurred, if not effaced. The sack shape permitted a play with bina­ries (inside and outside, surface and space) an insight that Hlobo gained from an undergraduate assignment to make a bag.

The rubber inner tubes used in Umphanda ongaza/iyo are among Hlobo's favorite materials. In a 2005 artist statement, he says that rubber "almost resembles flesh in its tone, finish, elasticity, and even fragility:' In addition, he points out that the Xhosa word for intestine is ithumbu, or inflatable tube. In this bag/organ, the rubber tubes kept their protruding valves, phallic beaks begging for air to keep the sack inflated (and desire sated). In addition to the dominant theme of sexual desire, the vessel also contained subtle political content. Discarded inner tubes are ubiqui­tous in South African townships, where the primary means of transport to the cities is via overcrowded mini-buses. The cheap tires (manufactured in Korea and the U.S.) wear out quickly, often causing serious accidents. The rubber skin of the vessel thus references the vulnerability of a dis­advantaged population whose lives have not substantially improved under ANC rule: their empty stomachs have not been filled.

These earth-bound metaphors yielded to cosmic ones when the viewer peered through openings in the skin to glimpse the infinite firmament of the interior, where the play of bright ribbons against darkness suggested a private world of pleasure balancing the external world of pain. With its plaited ribbon extensions and beaded fringes, Umphanda ongaza-liyo morphed into a monumental Xhosa purse, a celebration of the indigenous craft traditions that provide the inspira­tion for so much of South African cultural production today.

A tube, colon, or tail extended from Umphanda, breaking through the wall to form an exuberant orifice on the side. Reprising the euphoria of Hlobo's 2001 "horn of plenty," the ithumbu/tube, like the ubiquitous images of birth canals in Matthew Barney's Cremaster series, queried the genesis of male sexuality. Hlobo's recent installation at the Guangzhou Triennial in China, a hanging saddle with a protruding phallic horn and enormous saddle bags/ testicles, explored similar territory. Laughably obvious at first, lzinqanda mathe (the loved one) could be interpreted as a blunt rebuke of the law banning homosexuality in China. But, in his Triennial statement, Hlobo said that the saddle form reminded him of the European explorers who traveled to Africa.

In creating his transcultural dialogue, Hlobo prefers to keep his metaphors open­ended. But this does not mean that viewers have an easy job. To understand this work, which revels in a kind of reverse elitism, they must cross Hlobo's visual bridges into Xhosa territory. Like the form of Umphanda ongazaliyo, the visual and linguistic meta­phors are expansive but specific, and they do not permit Westerners to absorb/swallow them into their own parochial frame of refer­ence. As Hlobo has said, he takes meaning from the formal qualities of his native lan­guage, pronouncing it, listening to its sounds, while using its proverbs and symbol­ism to explore his identity. His complex "mind games" visually reflect the nuanced registers of expression and different levels of communication possible in Xhosa. In his world of shifting and overlapping meanings, nothing is quite stable. Sex, for instance can turn from a joyous celebration into a dark reflection of the selfishness, self-gratifica­tion, and arrogance of power. Despite such twists in meaning, Hlobo's work remains devoted to materials, harnessing the associa­tive potential of pink satin ribbon, rubber inner tubes, leather, lace, weathered wood, and colonial-style artifacts. He says that he "could be painting his stories but I am not, I am choosing these materials:· Like Hlobo's heritage, his work is a hybrid that builds on difference and convolution. In South Africa, he says, "it is difficult to separate influ- ences ... The Xhosa have never really rejected foreign influences. If you can't beat them, join them, right? Personally I love those influences, colonial and traditional:'