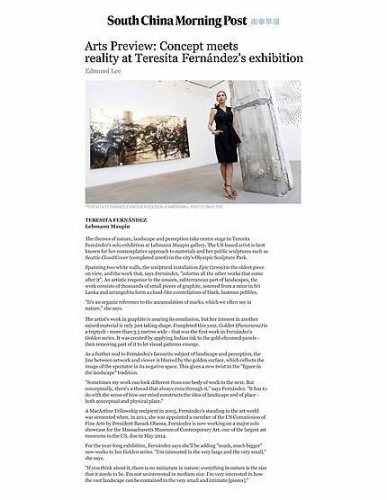 
The themes of nature, landscape and perception take centre stage in Teresita Fernández's solo exhibition at Lehmann Maupin gallery. The US-based artist is best known for her contemplative approach to materials and her public sculptures such as Seattle Cloud Cover (completed 2006) in the city's Olympic Sculpture Park.

Spanning two white walls, the sculptural installation Epic (2009) is the oldest piece on view, and the work that, says Fernández, "informs all the other works that come after it". An artistic response to the unseen, subterranean part of landscapes, the work consists of thousands of small pieces of graphite, sourced from a mine in Sri Lanka and arranged to form a cloud-like constellation of black, lustrous pebbles.


"It's an organic reference to the accumulation of marks, which we often see in nature," she says.

The artist's work in graphite is nearing its conclusion, but her interest in another mined material is only just taking shape. Completed this year, Golden (Panorama) is a triptych - more than 3.5 metres wide - that was the first work in Fernández's Golden series. It was created by applying Indian ink to the gold-chromed panels - then removing part of it to let visual patterns emerge.


As a further nod to Fernández's favourite subject of landscape and perception, the line between artwork and viewer is blurred by the golden surface, which reflects the image of the spectator in its negative space. This gives a new twist to the "figure in the landscape" tradition.

"Sometimes my work can look different from one body of work to the next. But conceptually, there's a thread that always runs through it," says Fernández. "It has to do with the sense of how our mind constructs the idea of landscape and of place - both conceptual and physical place."


A MacArthur Fellowship recipient in 2005, Fernández's standing in the art world was cemented when, in 2011, she was appointed a member of the US Commission of Fine Arts by President Barack Obama. Fernández is now working on a major solo showcase for the Massachusetts Museum of Contemporary Art, one of the largest art museums in the US, due in May 2014.

For the year-long exhibition, Fernández says she'll be adding "much, much bigger" new works to her Golden series. "I'm interested in the very large and the very small," she says.


"If you think about it, there is no miniature in nature: everything in nature is the size that it needs to be. I'm not so interested in medium size. I'm very interested in how the vast landscape can be contained in the very small and intimate [pieces]."

www.scmp.com
Back to Top