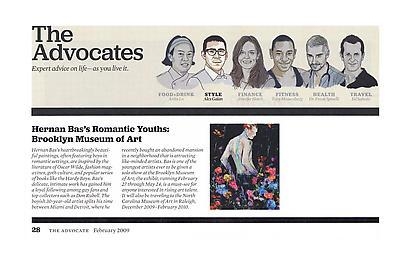 Hernan Bas's heartbreakingly beautiful paintings, often featuring boys in romantic settings, are inspired by the literature of Oscar Wilde, fashion magazines, goth culture, and popular series of books like the Hardy Boys. Bas's delicate, intimate work has gained him a loyal following among gay fans and top collectors such as Don Rubell. The boyish 30-year-old artist splits his time between Miami and Detroit, where he recently bought an abandoned mansion in a neighborhood that is attracting like-minded artists. Bas is one of the youngest artists ever to be given a solo show at the Brooklyn Museum of Art; the exhibit, running February 27 through May 24, is a must-see for anyone interested in rising art talent. It will also be traveling to the North Carolina Museum of Art in Raleigh, December 2009-February 2010.