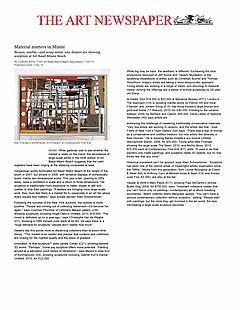 MIAMI. While galleries wait to see whether the market is really on the mend, the abundance of large-scale works in the ninth edition of Art Basel Miami Beach suggests that the cash registers have been ringing at the shipping companies at least.

Gargantuan works dominated Art Basel Miami Beach at the height of the boom in 2007, but shrank in 2008, with tentative displays of domestically sized, mainly two-dimensional works. This year’s fair, opening to VIPs today, sees a reinflation in scale and a return to three dimensions. Yet sculpture is traditionally more expensive to make, slower to sell and costlier to ship than paintings. “If dealers are bringing more large-scale work, they must feel there is a market for it—especially in an art fair where every square foot matters,” says private ­adviser Allan Schwartzman.

Following the success of the New York auctions, the outlook is more positive. “People are coming out of collecting retirement—it’s become fun again,” says Courtney Plummer of Lehmann Maupin gallery (J16), showing sculptures including Angel Otero’s Untitled, 2010, $18,000. “The mood is definitely up on a year ago,” says Christophe Van de Weghe (D7), showing a 1980 Donald Judd stack at $2.4m. He says there is a “huge demand for sculpture—people don’t realise how much”. Dealers say this points more to discerning collectors than to boom-time frenzy. “This market is so careful and precise that curators and collectors are looking for the highest quality and the place of greatest innovation. Is that sculpture?” asks James Cohan (C21), showing several 3D works: “Perhaps.” Some say sculpture offers more potential: “Painting arrived at a saturation point before tri-dimension,” says Mexico’s Jose Kuri of Kurimanzutto (G4), showing sculptures including Gabriel Kuri’s marble Untitled, 2010, for E22,000.

While big may be back, the aesthetic is different. Eschewing the slick productions favoured of Jeff Koons and Takashi Murakami, or the sprawling installations of artists such as Christoph Buchel and Thomas Hirschhorn, today’s artists are taking a more idiosyncratic approach. Young artists are working in a range of styles, and returning to classical media. Among the offerings are a series of bronze sculptures by 29-year-old Diana

Al-Hadid, from $18,000 to $22,000 at Marianne Boesky (H11); London’s The Approach (I14) is showing marble works by Patrick Hill and Alice Channer; and Johann König (E15) has Alicja Kwade’s large bronze and gold-leaf Kohle (1T Rekord), 2010, for E40,000. Pointing to the ceramic Adesso, 2009, by Bertozzi and Casoni, $55,000, David Leiber of Sperone Westwater (K9) says artists are
embracing the challenge of mastering traditionally conservative materials: “Very few artists are working in ceramic, and the artists like that.” José Freire of New York’s Team Gallery (G9) says: “There was a fear of bronze as a conservative and codified medium, but now artists like diversity in their choices.” He is showing Banks Violette’s wry bronze Untitled (Microphone Stand), 2006, for $55,000. Young artist Max Frisinger, showing the large-scale The Swan, 2010, and Nichts Muss, 2010, $75,000 each at Contemporary Fine Arts (K7), adds: “It used to be that painters only made paintings, and sculptors made 3D objects, but no one thinks like that any more.”

Historical precedent can’t be ignored, says Allan Schwartzman. “Sculpture has been one of the central areas of meaningful artistic exploration since the 1960s.” Works from this generation, from Louise Bourgeois at Cheim & Read (K8) to Anthony Caro at Mitchell-Innes & Nash (C9) and Annely Juda Fine Art (B5), are also at the fair.

Hauser & Wirth’s Marc Payot (K17), showing Paul McCarthy’s bronze Butter Dog, 2009, for $750,000, says: “Important collectors realise that you can’t focus only on painting—contemporary art is about breaking boundaries.” Miami collector Marty Margulies agrees: “You can’t have a serious contemporary collection without sculpture,” adding: “People start with paintings, but the more they get involved in the art world, the less intimidating a large-scale sculpture becomes.”