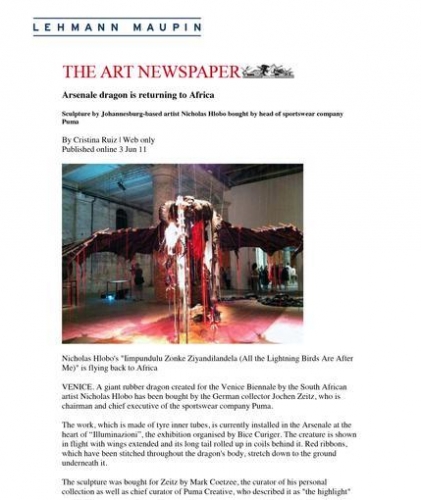 Arsenale dragon is returning to Africa

VENICE. A giant rubber dragon created for the Venice Biennale by the South African artist Nicholas Hlobo has been bought by the German collector Jochen Zeitz, who is chairman and chief executive of the sportswear company Puma.

The work, which is made of tyre inner tubes, is currently installed in the Arsenale at the heart of “Illuminazioni”, the exhibition organised by Bice Curiger. The creature is shown in flight with wings extended and its long tail rolled up in coils behind it. Red ribbons, which have been stitched throughout the dragon's body, stretch down to the ground underneath it.

The sculpture was bought for Zeitz by Mark Coetzee, the curator of his personal collection as well as chief curator of Puma Creative, who described it as "the highlight" of the art on display in Venice this week. "I know that this will become a seminal piece for the artist and the Jochen Zeitz Collection," said Coetzee.

The dragon will soon go on display in a museum in Africa, although Coetzee declined to give further details. He would also not reveal the price paid for the work but said that a sculpture by the artist of similar size would normally sell for around $250,000.

Hlobo, who is participating in the biennale for the first time, currently has work on show in several Venetian venues. As well as his dragon in the Arsenale, an enormous dying mutant quilted from an assortment of materials including leather collected from the streets of Johannesburg is on display at the Palazzo Grassi as part of “The World Belongs to You” (until 31 December) drawn from the collection of French billionaire François Pinault.

A rubber creature festooned with ribbons, which recalls a giant squid is on show at the Palazzo Papadopoli as part of an exhibition of artists shortlisted for the Future Generation Art Prize founded by Ukrainian collector Victor Pinchuk.

Hlobo says he drew his inspiration for the Arsenale dragon from many sources. "I looked at a lot of paintings by Tintoretto and found that many of them had birds in them," he said.

The title of the piece in the artist's native Xhosa language is Iimpundulu Zonke Ziyandilandela (All the Lightning Birds Are After Me). This refers to a song about a mythological creature, which "at times presents itself as a bird and at times as a handsome young man, but only to women," said Hlobo.