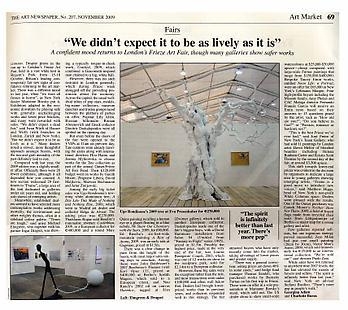 "We didn't expect it to be as lively as it is":A confident mood returns to London's Frieze Art Fair, though many galleries show safer works
By Georgina Adam and Charlotte Burns

LONDON. Despite jitters in the run-up to London's Frieze Art Fair, held in a vast white tent in Regent's Park from 15-18 October, Britain's leading Contemporary fair saw signs of confidence returning to the art market. There was a different mood to last year, when "we were all frozen in horror", as New York dealer Marianne Boesky put it. Exhibitors adapted to the economic downturn by playing safe with generally unchallenging works and lower price brackets, and many were rewarded with sales. "We didn't expect a dead fair," said Iwan Wirth of Hauser and Wirth (with branches in London, Zurich and New York). "But we didn't expect it to be as lively as it is." Many dealers noted a slower, more thoughtful approach amongst buyers, with the run-and-grab mentality of the past definitely laid to rest.

Compared with last year, the 2009 edition was a slightly smaller affair. Officially there were 28 fewer exhibitors, although it all depended how you counted. A new section welcomed 29 first-timers to "Frame", a large area of the lent dedicated to galleries under six years old, and holding solo shows of emerging artists.

Meanwhile, established dealers seemed to have selected more contemplative works addressing mortality, the environment and other weighty themes, often in a subdued colour palette. "Times are tough," said artist Michael Elmgreen, who together with his partner Ingar Dragset, was showing a typically tongue-in-cheek work, Untitled, 2009, which combined a Giacometti-inspired man chained to a big, white ball.

However, there was no such restraint in London generally, which during Frieze week shrugged off the prevailing pessimism about the economy. Across the capital, the usual well-shod tribes of pop stars, models, big-name collectors, museum directors and trustee groups raced between the plethora of parties on offer. Popstar Lily Allen, Russian billionaire Roman Abramovich and Greek collector Dimitris Daskalopoulos were all spotted on the opening day.

But even before the doors of the fair were opened to the VVIPs at 11am on preview day, Tate curators were already trawling the aisles along with intemational directors Hou Hanru and 10anna Mytkowska to choose works for the Tate collection as part of the annual Outset/Frieze Art Fair Fund. Their £120,000 budget went on works by Gareth Moore. Zbigniew Libera, David Maljkovic, Marwan Rechmaoui and Anur Zmijewski.

Among the early big ticket sales was Ugo Rondinonc's towering white aluminium tree, A Day Like This Made of Nothing and Nothing Else, 2009. which went to Madrid an dealer and collector Helga de Alvear. The asking price was €270,000. Thaddaeus Ropac sold Baselitz's minimalist abstract Coelinblau, 2009, to a European' collector for €400,000 and a round Marc Quinn painting recalling a human eye or a planet floating in a blue nebula, We Share our Chemistry with the Stars, 2009, for £90,000. Ed Ruscha's sill-foot-wide mountain painting A Riot of Atoms, 2009, was an early sale at Gagosian, priced at $1.5m.

There was a clear change in pace from the height of the boom, with most major sales taking days to conclude. Among these were John Baldessari's 2007 Beethoven's Trumpet (with Ear) Opus 133, priced at $400,000 at Berlin's Spruth Magers, which sold to a European client, and Neo Rauch's 2002 oil on canvas Harmlos. tagged at $1m (Zwirner gallery), which sold to another European collector. Daskalopoulos made one of the fair's biggest buys, with a David Hammons installation from Salon 94 (Untitled from "Fantasy in Flight" series, 1995), priced at $1.5m. Possibly the highest price, made at the very end of the fair, was Louise Bourgeois' Couple. 2003, which was one of 12 works on show in the sculpture park, sold for £2.1.4m to a European collector.

However, these big sales were the exception rather than the ru!e, and most transactions were under £100,000 and often well below that. Dealers had brought lower-priced works than in previous years, and collectors responded well to this strategy. The fair attracted buyers who have only recently come into the market. taking advantage of lower prices and greater supply.

"There was a general correction: asking prices are down 40% in some cases," said hedge fund manager Thomas Sandell, who purchased works by Barnaby Furnas on his first trip to Frieze. These were on offer in a solo presentation at Marianne Boesky's stand, which sold out. The US dealer chose to show small-scale walercolours at $25,000-$30,000 apiece-cheap compared with large-scale Furnas paintings that range from $150,000-$400,000. Bespoke Tracey Emin works, entitled Neon Life: a Portrait, were on offer for £65,000 at New York's Lehmann Maupin. Four high-profile buyers including the Missoni family, Amy Phelan and CAC Malaga director Fernando Frances Garcia will receive an Emin neon based on their answers to 15 questions posed by the artist, such as "How old are you?", "Do you believe in God?" or "Passion, romance or hardcore sex?".

"This is the best Frieze we've ever had," said Jose Freire of New York's Team Gallery, who had sold 11 paintings by London artist Dawn Mellor of bloodied beauties including Helena Bonham Carter and Kristin Scott Thomas by the second day of the fair, at around £5,500 apiece.

This shift towards lower-end prices was evident in the decision by organisers to dedicate a large area to young galleries showing emerging artists. "Frame is a good move to introduce new voices," said Matthew Higgs, head of New York's non-profit White Columns space. Dealers were pleased with the results. One of the Outset purchases was Gareth Moore's Neither Here Nor There, 2009, a field of frayed flags made from recycled chair seats from Lungenmeijer of Berlin-a major leap for a young gallery and artist.

While sales have not returned to anywhere near 2007 levels, the fair has elevated the moods of buyers and sellers. "The spirit is infinitely better than last year." said New York an adviser Stefano Basilico. "There's more pep in people's walk."