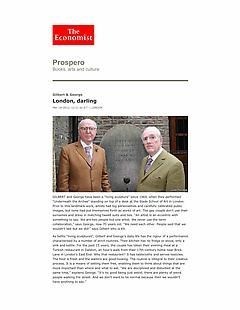 Gilbert and George have been a “living sculpture” since 1969, when they performed “Underneath the Arches” standing on top of a desk at the Slade School of Art in London. Prior to this landmark work, artists had big personalities and carefully calibrated public images, but none had put themselves forth as works of art. The gay couple don’t use their surnames and dress in matching tweed suits and ties. “An artist is an eccentric with something to say. We are two people but one artist. We never use the term collaboration,” says George, now 70 years old. “We need each other. People said that we wouldn’t last but we did!” says Gilbert who is 69.

As befits “living sculptures”, Gilbert and George’s daily life has the rigour of a performance characterised by a number of strict routines. Their kitchen has no fridge or stove, only a sink and kettle. For the past 15 years, the couple has taken their evening meal at a Turkish restaurant in Dalston, an hour’s walk from their 17th-century home near Brick Lane in London’s East End. Why that restaurant? It has tablecloths and serves testicles. The food is fresh and the waiters are good-looking. The routine is integral to their creative process. It is a means of setting them free, enabling them to think about things that are more important than where and what to eat. “We are disciplined and disturbed at the same time,” explains George. “It’s no good being just weird; there are plenty of weird people walking the street. And we don’t want to be normal because then we wouldn’t have anything to say.”

Along with performance, Gilbert & George’s principal medium is photography. Since 1974 they have arranged their images—some found, some shot themselves—in grid systems of all sizes. Their work combines self-portraiture with explorations of sociological subject matter like sex, drunkenness, loneliness, unemployment and street crime. When asked why they are always in their pictures, they reply, “Our stock answer is that when you go to a museum you say, shall we look at this Van Gogh? You don’t say, come look at this picture of a haystack.” Indeed, art is valued for the distinctive voices of its authors. “It is Van Gogh speaking to you from the grave. You might say ‘my late aunt’ but you would never say ‘the late Van Gogh,’” they add.

The duo has just finished a series of 292 pictures titled “London”, their largest to date. It is “a picture of society,” says George. “A picture of what is important for people,” adds Gilbert. Their process usually begins with them roaming the street, collecting raw material. In this case, the pair stole more than 3,710 of the street-side posters of newspapers such as the London Evening Standard and the Hackney Gazette that advertise salacious headlines like “Banker’s S&M Death Riddle” and “Stabbed Banker: The Last Minutes.” The thievery wasn’t always easy. On one occasion, when an “over-enthusiastic” young policeman chased them down, George implied that he was a teacher working on a school project about crime and anti-social behaviour. “Oh, sir, if only more people were like you,” observed the policeman. Gilbert and George are good at projecting an innocent other-worldliness. On another occasion, they were mistaken for clergymen.

Once Gilbert and George had their collection of newspaper headlines, they sorted them by key words. “Murder” and “money” were the most frequent terms, followed by “family”, “school”, “death”, “kids” and “terror.” They then made works which combined these headlines with grid-based photo-montages. In the bottom right corner of every new work is a different image of Queen Elizabeth, scanned from hundreds of coins from around the Commonwealth—Malta, Canada, Cyprus. A camp joke, it gives the appearance of a royal seal of approval.