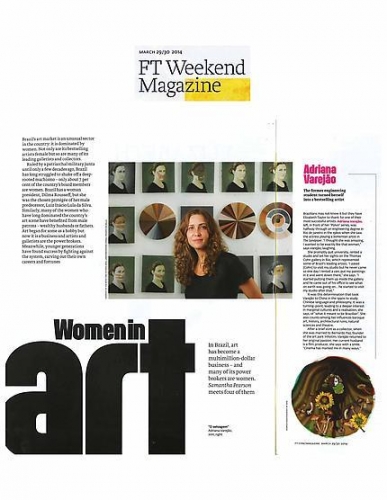 Brazil’s art market is an unusual sector in the country: it is dominated by women. Not only are its bestselling artists female but so are many of its leading gallerists and collectors.

Ruled by a patriarchal military junta until only a few decades ago, Brazil has long struggled to shake off a deep-rooted machismo – only about 7 per cent of the country’s board members are women. Brazil has a woman president, Dilma Rousseff, but she was the chosen protégée of her male predecessor, Luiz Inácio Lula da Silva. Similarly, many of the women who have long dominated the country’s art scene have benefited from male patrons – wealthy husbands or fathers. Art began for some as a hobby but now it is a business and artists and gallerists are the power brokers. Meanwhile, younger generations have found success by fighting against the system, carving out their own careers and fortunes.

Brazilians may not know it but they have Elizabeth Taylor to thank for one of their most successful artists. Adriana Varejão, in front of her “Polvo” series, was halfway through an engineering degree in Rio de Janeiro in the 1980s when she saw the actress playing a bohemian artist in The Sandpiper. “I thought she was amazing, I wanted to be exactly like that woman,” says Varejão, laughing.

She promptly quit university, rented a studio and set her sights on the Thomas Cohn gallery in Rio, which represented some of Brazil’s leading artists. “I asked [Cohn] to visit my studio but he never came so one day I rented a van, put my paintings in it and went down there,” she says. “I started putting them up inside the gallery and he came out of his office to see what on earth was going on . . . he started to visit my studio after that.”

It was this determination that took Varejão to China in the 1990s to study Chinese language and philosophy. It was a turning point, leading to a deeper interest in marginal cultures and a realisation, she says, of “what it meant to be Brazilian”. She also counts among her influences baroque art, history, architectural ruins, natural sciences and theatre.

After a brief stint as a collector, when she was married to Bernardo Paz, founder of the art park Inhotim, Varejão returned to her original passion. Her current husband is a film producer, she says with a smile. “Cinema has marked me in many ways.”