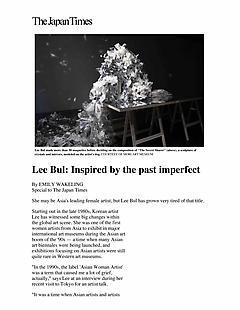 Lee Bul: Inspired By The Past Imperfect
By Emily Wakeling

She may be Asia's leading female artist, but Lee Bul has grown very tired of that title.

Starting out in the late 1980s, Korean artist Lee has witnessed some big changes within the global art scene. She was one of the first women artists from Asia to exhibit in major international art museums during the Asian art boom of the '90s — a time when many Asian art biennales were being launched, and exhibitions focusing on Asian artists were still quite rare in Western art museums.

"In the 1990s, the label 'Asian Woman Artist' was a term that caused me a lot of grief, actually," says Lee at an interview during her recent visit to Tokyo for an artist talk.

"It was a time when Asian artists and artists from the so-called third world were perceived in a shallow way. 'Asian artist' was just a term of convenience," she continued. "The idea of Asian art was a concept that was toyed with, but it didn't mean much. It was not fully conscious. The title 'Asian woman artist' also made people make an automatic connection with the label 'feminist.' "

Despite her upbringing in a very political family, Lee has never personally identified with South Korea's late-coming feminist movement. "I don't believe in any 'isms' " she says. But she is an artist who constantly questions political ideals. Specifically, she questions what she sees as civilization's chronic belief in utopianism.

Even if Lee does not consider herself a feminist artist, there has been plenty of feminist critiques of her art. Looking at the body of work on display for "From Me, Belongs to You Only," her major solo exhibition at Tokyo's Mori Art Museum, a lot appears to comment on the ideals surrounding women's bodies and the desire for bodily improvement.

At the exhibition's halfway point, visitors are confronted with a dark room populated with stark white, humanoid female figures hanging from the ceiling. The "Cyborg" and "Anagram" series (late 1990s) are a culmination of the artist's interest in the human desire for reinvention and improvement, an obsession pursued most conspicuously by Western and Asian women through cosmetic surgery. With a combination of mechanical joints and feminine curves, these figures are an artistic hypothetical exploration of where science may lead us in the future.

Instead of the artist suggesting a viable option for human advancement, these statues lack limbs and heads. Like the idealized bodies of "Nike of Samothrace" the "Venus de Milo" and other ancient Greek statues, these works show human evolution alongside suggestions of antiquity. The sculptures are also reminiscent of anime-style cyborgs, an influence Lee credits to her early love of Japanese animation.

"Korea imports a lot of Japanese culture, like cartoons and karaoke. When I was a child, I just assumed the animations were Korean. Then, as an adult, I wanted to find out more about their origins," she says. "I've always been interested in Japanese pop culture."

This includes an interest in karaoke, another pastime with Japanese origins that became popular in Korea. In 1999-2001, Lee created karaoke pods for "Live Forever," an installation in which visitors could participate in their own individual and private karaoke sessions.

The pods are unique in design — white and sleek like sports cars or spaceships, or maybe even coffins — and in this exhibition, they serve as a link between Lee's figurative works to the architecturally inspired pieces of her newer series.

Architecture began to feature in Lee's sculptures in 2005. Second to the alteration and manipulation of our bodies, architecture can be seen to represent our most-immediate social and cultural constructs. Lee moved on to a series of ambitious pieces inspired by Modernist architects Bruno Taut and Vladimir Tatlin.

Taut's ambitious Alpine Architecture (1917), a proposal to construct glass houses the size of mountains in the Alps, was an example of Modernism's most idealistic aims in which the transparent glass represented his vision of a new openness in international relations and a strategy for peace. Lee's piece, "After Bruno Taut (Beware the sweetness of things)" (2007) is a large work constructed from strings of beads, wires and crystals to evoke the kind of brilliance Taut must have been picturing when he imagined his monumental glass houses.

The title of another work "Mon grand recit: Weep into stones . . ." (2005) refers to French philosopher Jean-Francois Lyotard's Postmodern theory that rejected the "grand recit" (grand narrative) or "isms" of Modernism. Lee claims the grand narrative by adding the French word for "my" ("mon") and asserts the relevance of personal viewpoints over collective ideals. In this work, Lee has abstracted famous architectural sketches, collapsed the buildings and sent elevated highways to dead ends. She reconstructs the grand narrative, as it was represented in Modernist architecture, and manipulates it as she wants.

One room at the Mori Art Museum contains a reconstruction of Lee's studio, which offers an insight into her artistic process. There are a vast number of small maquettes, an indication of Lee's long period of experimentation before she finally creates a sculpture.

More than 50 maquettes were made before "The Secret Sharer" (2012), the final work in the exhibition, was completed. Modelled on the artist's dog, this larger-than-life dog-shaped sculpture sits atop a table, its mouth open wide as it vomits. Constructed from crystals and mirrors, the effect of this rather powerful, potentially off-putting image, is countered by the beauty of the materials. Not only does "The Secret Sharer" aim to tell the audience something by opening its mouth, but the mirrors also allow the viewers to share glimpses of themselves as well as the sculpture's surroundings.

"The Secret Sharer" has been described as a self-reflective piece about the artist's career, but this not to say that Lee is finished with her "Mon grand recit" series.

"It's such a huge theme. I can't picture an ending," she says. "But eventually I will finish I guess. I can't do it forever."

As humans continue to face the future while dealing with history's mistakes, Lee Bul's art will continue to find inspiration and relevance.