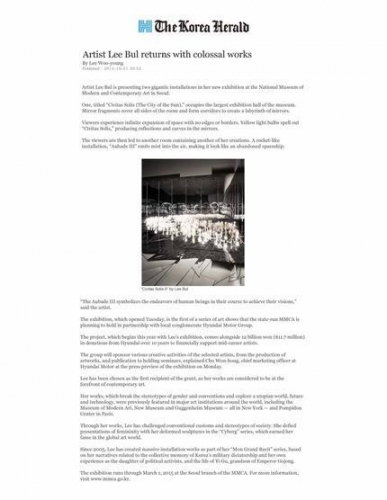 
Artist Lee Bul is presenting two gigantic installations in her new exhibition at the National Museum of Modern and Contemporary Art in Seoul.


One, titled “Civitas Solis (The City of the Sun),” occupies the largest exhibition hall of the museum. Mirror fragments cover all sides of the room and form corridors to create a labyrinth of mirrors.


Viewers experience infinite expansion of space with no edges or borders. Yellow light bulbs spell out “Civitas Solis,” producing reflections and curves in the mirrors.


The viewers are then led to another room containing another of her creations. A rocket-like installation, “Aubade III” emits mist into the air, making it look like an abandoned spaceship.

“The Aubade III symbolizes the endeavors of human beings in their course to achieve their visions,” said the artist.


The exhibition, which opened Tuesday, is the first of a series of art shows that the state-run MMCA is planning to hold in partnership with local conglomerate Hyundai Motor Group.


The project, which begins this year with Lee’s exhibition, comes alongside 12 billion won ($11.7 million) in donations from Hyundai over 10 years to financially support mid-career artists.


The group will sponsor various creative activities of the selected artists, from the production of artworks, and publication to holding seminars, explained Cho Won-hong, chief marketing officer at Hyundai Motor at the press preview of the exhibition on Monday.


Lee has been chosen as the first recipient of the grant, as her works are considered to be at the forefront of contemporary art.


Her works, which break the stereotypes of gender and conventions and explore a utopian world, future and technology, were previously featured in major art institutions around the world, including the Museum of Modern Art, New Museum and Guggenheim Museum ― all in New York ― and Pompidou Center in Paris.


Through her works, Lee has challenged conventional customs and stereotypes of society. She defied presentations of femininity with her deformed sculptures in the “Cyborg” series, which earned her fame in the global art world.


Since 2005, Lee has created massive installation works as part of her “Mon Grand Recit” series, based on her narratives related to the collective memory of Korea’s military dictatorship and her own experience as the daughter of political activists, and the life of Yi Gu, grandson of Emperor Gojong.


The exhibition runs through March 1, 2015 at the Seoul branch of the MMCA. For more information, visit www.mmca.go.kr.