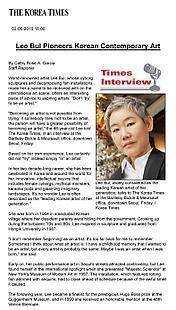 World-renowned artist Lee Bul, whose cyborg sculptures and decomposing fish installations made her a name to be reckoned with on the international art scene, offers an interesting piece of advice to aspiring artists: "Don't 'try' to be an artist."

"Becoming an artist is not possible from trying. If somebody tries 'not' to be an artist, the person will have a greater possibility of becoming an artist," the 46-year-old Lee told The Korea Times, in an interview at the Bartleby Bickle & Meursault office, downtown Seoul, Friday.

Based on her own experience, Lee certainly did not "try" instead simply "is" an artist.

In her two decade-long career, she has been celebrated in Korea and around the world for her innovative, intellectual oeuvre that includes female cyborgs, mythical monsters, karaoke pods and gleaming imaginary landscapes. It's no wonder Lee is often described as the "leading Korean artist of her generation."

She was born in 1964 in a secluded Korean village where her dissident parents were hiding from the government. Growing up during the turbulent '70s and '80s, Lee majored in sculpture and graduated from Hongik University in 1987.

"I don't remember 'beginning' as an artist. It's too far back for me to remember. Sometimes I think about what an artist is. I have a childhood memory that I wanted to be an artist, but every artist is probably the same. Maybe I was an artist when I was born," she said.

Early on, her public performance art in Seoul's streets attracted controversy, but Lee found herself in the international spotlight when she presented "Majestic Splendor" at New York's Museum of Modern Art in 1997. The installation, which featured rotting fish adorned with sequins, had to close ahead of schedule because of the awful smell it caused.

The following year, Lee became a finalist for the prestigious Hugo Boss prize at the Guggenheim Museum, and in 1999 she received an honorable mention at the 48th Venice Biennale.

Futuristic as her works may be, Lee constantly finds ideas from "everywhere and from life, not just mine." The process of creating her art is simple: she gets an idea, writes it down, puts it on a wall and lets it stay there until one day she feels like expounding on it.

"Almost every day, I take notes and drawings of my ideas, even small ideas because sometimes I forget them. I put these pieces of paper on the wall. Every day, I pass these drawings. Some days, I suddenly want to develop an idea. After that I draw and make notes again. This is the usual process. I am not focused on one piece from start to finish because I have too many things ongoing," she said.

Currently working on new pieces, Lee is busy preparing for up-coming exhibitions, such as a solo show at Lehman Maupin in New York City (April 8-June 19), and various group shows in Minneapolis, Brussels, London, Rotterdam and Ottawa. In 2011, a retrospective of her works will be held at the Mori Art Museum in Tokyo, before traveling around the world.

Despite her success and fame, Lee remains unaffected by it all. "I feel pressure, but the pressure is not about fame. (Whether I'm) famous or not, that's not important to me anymore. But I do have pressure about my work, especially when I feel my work is not so good and I want to develop it more. It's hard and difficult," she said.

While the pressure can be overwhelming, and even affects her health, Lee knows it is impossible to avoid. "Pressure is a part of my life. It's killing my body, I'm getting sick. But it's not possible to erase the pressure," she said.

With cropped, silvery hair and piercing eyes, Lee may appear serious and intimidating at first, but always has a laugh to spare. After posing for The Korea Times photographer, she jokingly complained that she always seems to look angry in photographs. "I don't know why I look angry, but I'm not," Lee said, with a smile that was nowhere to be seen in front of the camera.

Lee often gets invitations to give lectures to art students in universities. "When they invite me to symposiums or class, they ask me to give my energy to the students. But I'm older than them!" she chuckled. "They have more energy than me. Why should I give my energy to them? They should give me their energy."

Asked about what is the biggest accomplishment so far in her 20 year career, Lee shakes her head: "I don't know. I never compare my works. But probably right now... that I'm still alive."