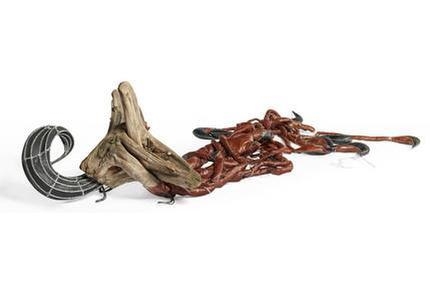 At a time when values for some blue-chip contemporary artworks have fallen by a third from a year ago, collectors are finding pockets of strength in a surprising new art mecca—Africa.

From the mazelike streets of Morocco’s Marrakesh to Cape Town’s harbor, Africa is sprouting new auction houses, biennials, art fairs and museums, including four museums in the works in South Africa alone. Gone are the days when Africa’s cultural output consisted of traditional tribal masks, woven baskets or carved figures; today’s rising art stars are exploring potent issues like immigration, gay culture and China’s investment in the continent. What’s more, Africa’s artistic institutions are fueled almost entirely by hometown support, resulting in self-sustaining art scenes that appear to be thriving whether or not the rest of the world pays attention.

“For years we didn’t have many galleries, but artists were still making work that was brave and experimental—and now everyone can see that,” said Azu Nwagbogu, founder of LagosPhoto, a six-year-old festival in Nigeria’s capital.

Contemporary African art is a bargain compared with other art-world hot spots. Bonhams expert Giles Peppiatt said works by Africa’s best-known living artists typically sell for less than $150,000, or the ballpark asking price at auction for works by much younger, less time-tested artists like New York art star Dan Colen. Politically charged portraits by Congolese painter Cheri Samba, the first contemporary African artist to have a show at the Louvre, still sell for around $30,000.

Gallery works by William Kentridge, a major South African artist whose animated drawings are owned by museums like the Tate, hover between $150,000 and $600,000, according to Goodman Gallery. That’s a fraction of the millions paid lately for artists who found fame after him, like China’s Zeng Fanzhi or Brazil’s Beatriz Milhazes.

Africa’s economy is still roiling from volatile oil prices, but prices appear to be holding steady or rising for many of the continent’s heavy hitters in the art world. Three months ago, a shimmering tapestry made from folded scraps of colorful aluminum by Ghana’s El Anatsui—arguably the best-known living African artist—sold for $1.2 million to a U.S. collector at Bonhams in London, the artist’s third-highest auction price. The 2006 piece, “Peju’s Robe,” was only expected to sell for up to $795,000.

All this activity has won the attention of international fair organizers who have recently jumped on the Africa bandwagon. At New York’s Armory Show in March, organizers set aside an area for 14 galleries who show African artists, several of whom had never shown in the U.S. before. Last week, 6,500 people attended 1:54 Contemporary African Art Fair during its second show in New York after debuting three years ago. Nairobi gallery ARTLabAfrica drew in crowds with Kenyan painter Beatrice Wanjiku’s haunting portraits of faceless people wearing straitjackets. Crowds also packed into the booth of Johannesburg’s David Krut Projects to see Ethiopian photographer Aida Muluneh’s vividly colorful portraits in which she explores ideas about rules of social engagement in her homeland.

In November, Paris will get its own niche fair, called Also Known as Africa (AKAA), and a month after that, Ghana will debut a new fair, Art Accra, in a hotel on Labadi Beach.

Collectors say they’re taking a closer look at contemporary African art now because the continent’s whole scene is making a seismic break with tradition. Little of it borrows from Africa’s traditional visual tropes: 19th century carved wooden figures, raffia costumes and woven baskets once deemed “primitive” yet famously collected by modern artists like Picasso. The current generation of contemporary African artists is well traveled and up-to-date on artistic developments in New York and London while simultaneously tuned into issues at home.

China’s entree into Africa, as investor and importer-exporter, is a hot-button topic of work throughout the continent. Moffat Takadiwa pays scavengers in his home city of Harare, Zimbabwe, to bring him examples of cheaply made Chinese imported plastic goods, nicknamed zhing-zhong, which he bundles into bulging wall hangings. Congolese artist Sammy Baloji layers century-old photos of indigenous tribes and pith helmet-wearing Belgian colonists atop smokestack views of copper-smelting factories and mines now owned by Chinese companies. Samuel Fosso, a photographer known for taking elaborate, Cindy Sherman-style self portraits, dressed up like Chairman Mao Zedong for a series called “Emperor of Africa” that made its debut at the LagosPhoto festival in Nigeria three years ago.

Migration is another prevalent theme. In South Africa, Dan Halter makes wordplay paintings and collages using woven plastic bags, a nod to the heavy-laden refugees and roadside peddlers the artist meets along South Africa’s border with Zimbabwe. His dealer Ashleigh McLean at Whatiftheworld Gallery said Mr. Halter’s art tries to reconcile his mixed feelings about being a Zimbabwean living in a country wary of immigrants.

“Homogenous, safe places quibble about prices and parties, but art from our continent isn’t easy,” said Emile Stipp, an insurance actuary whose home in Pretoria, South Africa, brims with African contemporary art he’s bought over the past decade. He displays at least 60 video works in his basement-turned-viewing room. “Ours isn’t a simple story, but I think that makes for more interesting art.”

International collectors seeking Africa’s rising stars will have to play catch up with wealthy, local art lovers who have—until now—largely fueled the continent’s small art hubs. Major collectors include Theo Danjuma, the son of a Nigerian general, who has amassed a collection of at least 400 artworks. Among them: Zimbabwean artist Kudzunai Chiurai’s theatrically staged photos of people wielding guns.

Salim Currimjee, an architect living on the tiny island of Mauritius east of Madagascar in the Indian Ocean, had never seen contemporary African art until he took a business trip to Cape Town a few years ago. Wandering into the Stevenson Gallery two hours before his flight home, Mr. Currimjee said he was “dumbfounded” by what he saw. “I had never seen art like that in Africa,” said Mr. Currimjee. Weeks later, he started buying pieces by young African artists from across the continent including Johannesburg’s Nicholas Hlobo, who uses colorful ribbons to stitch cryptic, fantastical paintings and bulbous, rubbery sculptures. Within a year, Mr. Currimjee said he was asked to lend one of Mr. Hlobo’s ribbon paintings to London’s Tate Modern. “I was surprised,” he added. “Finally the Western world is waking up and looking beyond its normal boundaries.”

In South Africa, at least four collectors are planning or building contemporary art museums. Former Puma chairman Jochen Zeitz is converting a 1920s grain silo along Cape Town’s harbor to be a nine-story museum to exhibit his vast holdings of African artists like conceptual photographer Edson Chagas as well as international stars like Glenn Ligon. His Zeitz Museum of Contemporary Art opens next February.

Piet Viljoen, an asset manager in Cape Town, opened a space in a former Victorian home four years ago named for the street where it’s located, the New Church Museum.

Shopping for African contemporary art wasn’t so easy when German-American collector Artur Walther started buying it in 1996 after seeing a show of African photography at the Solomon R. Guggenheim Museum. But Mr. Walther said he admired “how different African photography was from the scenes of famine and animals” he was accustomed to seeing in news accounts of Africa. Eventually, he amassed a collection that comprises at least 65 photographers including Angola’s Edson Chagas, an artist known for his wry portraits of travelers with bags on their heads.

Many of Mr. Walther’s early, exploratory stops around Africa remain important destinations for collectors, he said—including the Dak’Art biennial in Senegal, LagosPhoto, and a photography biennial called Bamako Encounters in Mali. The challenge, he said, lies in convincing more museums in Africa to join him in the hunt.

Right now, only a handful of African state museums even collect contemporary art, and state colleges remain uneven, with some overseeing highly developed art schools that produce tons of talent (Zimbabwe) and others only offering a few courses on art (Kenya). Paris-based Simon Njami said showing art in parts of Africa can prove daunting, logistically and otherwise. Whereas curators typically get a couple of years to organize major biennials in Europe or the U.S., Mr. Njami said he was given four months to organize Dakar’s biennial, Dak’Art, which opens May 3.

Mr. Njami said he can’t access the biggest new art space in Dakar, the Museum of African Civilizations. The Chinese government recently built the round $2.5 million museum as a diplomatic gesture to Senegal’s former president, but there’s no collection earmarked for it yet. Currently, it’s locked and empty.