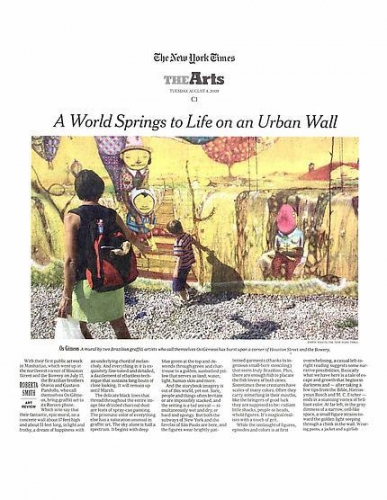 
With their first public artwork in Manhattan, which went up at the northwest corner of Houston Street and the Bowery on July 17, the Brazilian brothers Otavio and Gustavo Pandolfo, who call themselves Os Gêmeos, bring graffiti art to its Rococo phase. Which is to say that their fantastic, epic mural, on a concrete wall about 17 feet high and about 51 feet long, is light and frothy, a dream of happiness with an underlying chord of melancholy. And everything in it is exquisitely fine-tuned and detailed, a dazzlement of effortless technique that sustains long bouts of close looking. It will remain up until March.

The delicate black lines that thread throughout the entire image like drizzled charcoal dust are feats of spray-can painting. The prismatic color of everything else has a saturation unusual in graffiti art. The sky alone is half a spectrum. It begins with deep blue green at the top and descends through green and chartreuse to a golden, sunbathed yellow that serves as land, water, light, human skin and more.


And the storybook imagery is out of this world, yet not. Sure, people and things often levitate or are impossibly stacked, and the setting is a tad unreal — simultaneously wet and dry, or hard and spongy. But both the subways of New York and the favelas of São Paulo are here, and the figures wear brightly patterned garments (thanks to ingenious small-bore stenciling) that seem truly Brazilian. Plus, there are enough fish to placate the fish lovers of both cities. Sometimes these creatures have scales of many colors. Often they carry something in their mouths, like the bringers of good luck they are supposed to be: radiant little shacks, people or heads, whole figures. It’s magical realism with a touch of grit.

While the onslaught of figures, episodes and colors is at first overwhelming, a casual left-to-right reading suggests some narrative possibilities. Basically what we have here is a tale of escape and growth that begins in darkness and — after taking a few tips from the Bible, Hieronymus Bosch and M. C. Escher — ends in a stunning vortex of brilliant color. At far left, in the gray dimness of a narrow, cell-like space, a small figure strains toward the golden light seeping through a chink in the wall. Wearing pants, a jacket and a girlish scalloped bonnet and shouldering a bag, she’s leaving home, as the song says. A small spotted dog watches from the safety of a tenderly, elaborately wood-grained floor.


Through the chink the golden world awaits, arrayed around and above what seems to be a nearly circular waterfall; it’s a world populated by spirit guides, with or without gills. And it all adds up, or at least it is all visibly linked. You’re supposed to keep going, from one thing to the next, gaining wisdom along the way.

To sketch in some of the action, the connections begin with a boy on a four-poster bed (Dreamland’s point of origin) with a peacock on his back, using a second peacock as an ear trumpet. He listens to a whale whose skin, a mosaic of blues, is dotted with extra eyes. Atop the whale lies a girl (maybe our heroine, but older) so relaxed that the dots on her lavender-pink blouse are rising into the atmosphere like bubbles. The whale’s tail hooks over the rail of a snaking subway track, while the beast itself balances on a stack of three figures teetering on a rope bridge with iffy wood slats (San Luis Rey, anyone?) extending from one side of the waterfall to the other. (Don’t ask.)


Back on the tracks a subway car — the N train — is straddled by a large boy, who has human heads gathered around him like the day’s catch and a galleon on his head. A fish that is also a dirigible on its side is anchored to his hand. (Behind all this stretches a yellow out-of-focus landscape where the hills are faces.)

Next we are in the city where two boys who could be Os Gêmeos (Portuguese for the Twins, which the 35-year-old Pandolfo brothers are) are cramped inside a two-story, two-room house. The tracks continue into a station with an Escher-like mural of bright checkerboards receding to a vanishing point, and also the tag of Dash Snow, a New York graffiti artist who died last month and to whom the mural is dedicated.


The station is also part of a boat (touring the waterfalls?), with plush red seats tufted with yellow faces. At the front of the boat, next to a protective figurehead, sits a knowing young woman looking out at us amid bundles of patterned fabric. She has little houses in her green-and-black hair and wears a blouse whose planetlike dots are, this time, staying put.

The final third of the mural explodes in the rainbow vortex that is fabulously explicit in color but physically indeterminate. Sometimes it is a beach at low tide, sometimes a prison wall, sometimes quicksand, at least for a figure carrying a grandfather clock. Also here is a small Trojan horse (or maybe a mule), which brings back the lovely wood grain in warmer colors. Its neck is open and forms a double cameo for the faces of a boy and girl.


This telling omits many wonderful details. One of the best is front and nearly center in the image: a boy who seems to sit on a waterspout, wearing a fish mask and a T-shirt that is one of the painting’s best moments. It depicts a landscape: note the white stenciled stone wall, the changing greens of the tiny stenciled trees, the golden setting sun. It is an idyll of pastoral, escape-from-the-city living, cottage and all.