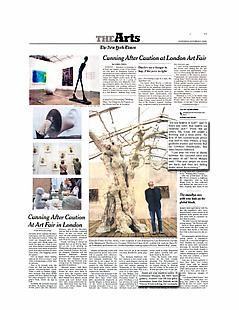 Cunning After Caution at London Art Fair
By Carol Vogel

LONDON — Business is booming in at least one remote corner of the Frieze Art Fair here. As Stephanie Syjuco, a San Francisco artist, talked to collectors on Wednesday, she busily wrote out invoices and swiped credit cards, all the while keeping an eye on a group of young artists who were diligently working at nearby tables. One of them, Claudia Djanbbari, was molding self-hardening clay into a coffee-table-size version of a South Korean artist's version of a Jeff Koons's "Balloon Dog" sculpture. "I'm making a copy of a copy," Ms. Djanbbari said.

The buyer, Mimi Brown, a collector who is based in Hong Kong, happily paid $243 for the miniature third-generation knockoff. The second generation, a commentary on the Koons work by the Korean artist Gimhongsok, was fashioned out of trash bags and cast in resin. It is prominently displayed at the Kukje Gallery stand, priced at $50,000. One of Mr. Koons's original "Balloon Dog" sculptures sold for around $20 million two years ago.

"I love having conversation pieces," Ms. Brown said, adding that her purchase seemed only appropriate, "coming from Hong Kong, the land of fakes."

The success of Ms. Syjuco's project, "Copystand: An Autonomous Manufacturing Zone," which includes duplicates of paintings by Philip Guston and A. R. Penck, speaks volumes about Frieze — the most prestigious fair of contemporary art in a city known for contemporary art — and the state of the current art market. There is a hunger to buy, but at the right price.

"Business is O.K., a lot better than last year," the New York dealer Gavin Brown said a few hours after the fair had begun. A year ago Frieze opened on the heels of the Lehman Brothers bankruptcy and the meltdown of the financial markets. While the world has changed since then, and sales were being made this week, the pace isn't what it once was. Some dealers acknowledged that prices were about 30 percent lower than they had been in more flush times. And haggling seems de rigueur.
"It's no longer about making sales in the first two hours," said Allan Schwartzman, a New York art adviser.

Now in its seventh year, the Frieze Art Fair has become an annual see-and-be-seen event. When it ends on Sunday, organizers estimate that about 60,000 people will have passed through the white temporary tent in Regent's Park, where the fair is held.

Certainly the economy has had an effect: 28 dealers dropped out of this year's fair. But Matthew Slotover, one of the directors, said he had no trouble replacing them. "In fact, it's larger this year," he said, noting that 164 exhibitors are included, compared with 151 in the previous year.

People watching is always as popular here as art buying. Spotted at the V.I.P. opening on Wednesday morning were the actress Gwyneth Paltrow, the fashion designer Valentino and the Russian billionaire Roman Abramovich, along with museum directors like Nicholas Serota from the Tate and Richard Armstrong from the Solomon R. Guggenheim Foundation.

Although dealers said there were not as many American collectors as there have been in years past, the regulars have come, among them Donald and Mera Rubell from Miami; David Ganek and Jane Holzer from New York; Stefan Edlis from Chicago; Mimi Haas from San Francisco; and Peter Brant from Greenwich, Conn.

Dealers are playing it safe with tried-and-true artists they know will be popular with collectors, and many are capitalizing on current museum exhibitions. The main fair is not a place for discoveries. There are several examples by John Baldessari, the Conceptual artist whose exhibition "Pure Beauty" opened this week at the Tate Modern.

One of the most dramatic of his works is "Beethoven's Trumpet (With Ear) Opus #133," from 2007, prominently displayed at Sprüth Magers, a Berlin gallery. At the booth a bronze-plated trumpet protrudes from a six-foot-tall ear. Visitors who put their own ear up to the trumpet can hear Beethoven softly playing.

The Barbara Gladstone Gallery features a red, round sculpture by Anish Kapoor, who has an exhibition at the Royal Academy here and another opening on Wednesday at the Guggenheim Museum in New York. Near it is a suite of 10 blue pastel drawings by Jim Hodges, the American artist who now has a show at the Pompidou Center in Paris. Stephen Friedman, a London dealer, has devoted his entire booth to a single installation by Mr. Hodges. Called "The Dark Gate," it is an all-black wood room with an aperture made of large, sharpened steel spikes scented with perfume made by the artist.

Often the booths with fewer works are the most visually pleasing. Eva Presenhuber, a dealer from Zurich, has created an elegant setting by showing just two artists. In the center is a 19-foot-tall white tree of cast aluminum by the Swiss artist Ugo Rondinone; behind it hangs a colorful triptych by the Swiss artist Dieter Roth.

Some art was made to order. At Lehmann Maupin, the New York gallery, visitors can fill out questionnaires from the British artist Tracey Emin asking, for example, "Do you believe in God?" and "Is there any color that makes you violently sick?" From the answers, Ms. Emin will create a drawing and a neon piece. The first of her custom-made pieces was sold to Amy Phelan, a Guggenheim trustee and former Dallas Cowboys cheerleader; four other buyers followed.

"Last year we were in denial, between the canceled sales and no sales at all," David Maupin said. "This year people we know are back, and they are feeling better about the economy."

Some artists have produced works with a nod to the tough times. At the Helga de Alvear gallery from Madrid, an untitled sculpture by the duo Elmgreen & Dragset, made this year, depicts a Giacometti look-alike chained to a big white ball, a spoof on one of the "Walking Man" bronzes.

Still, the proliferation of fairs like Frieze presents a challenge for organizers: how to keep things fresh so that collectors and dealers feel they have to return. Arguing that many of the dealers have aged along with the fair, the organizers have introduced Frame, a new section of 29 galleries from around the world that have been in existence for less than six years.

Each of these galleries has a small booth (far less roomy but cheaper than booths in the main fair) that is showing only one artist.

The geographic spread of these young entries is impressive. Project 88, a two-year-old gallery from Mumbai, for example, has filled its space with cartoonlike drawings by Sarnath Banerjee, an artist in New Delhi. Nearby is AMP, a year-old gallery from Athens, displaying an installation by Joep van Liefland, a Dutch artist who lives in Berlin.

Only one of these galleries is from New York: Lisa Cooley, which came with an elegant group of minimalist black-and-white photographs by Erin Shirreff, a New York artist, that resemble blown-up images of knives.

"I've always liked Frieze," said Ms. Cooley, who has been running her gallery on Orchard Street for just two years. "Until now I always thought it would be the last fair I could afford to do."