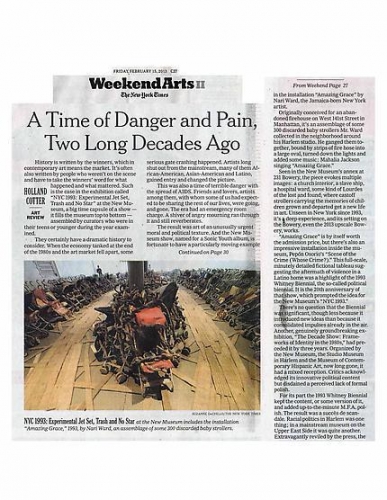 A Time of Danger and Pain, Two Long Decades Ago
By: Holland Cotter


History is written by the winners, which in contemporary art means the market. It’s often also written by people who weren’t on the scene and have to take the winners’ word for what happened and what mattered. Such is the case in the exhibition called “NYC 1993: Experimental Jet Set, Trash and No Star” at the New Museum, a big time capsule of a show — it fills the museum top to bottom — assembled by curators who were in their teens or younger during the year examined.

They certainly have a dramatic history to consider. When the economy tanked at the end of the 1980s and the art market fell apart, some serious gate crashing happened. Artists long shut out from the mainstream, many of them African-American, Asian-American and Latino, gained entry and changed the picture.


This was also a time of terrible danger with the spread of AIDS. Friends and lovers, artists among them, with whom some of us had expected to be sharing the rest of our lives, were going, and gone. The era had an emergency room charge. A shiver of angry mourning ran through it and still reverberates.

The result was art of an unusually urgent moral and political texture. And the New Museum show, named for a Sonic Youth album, is fortunate to have a particularly moving example in the installation “Amazing Grace” by Nari Ward, the Jamaica-born New York artist.


Originally conceived for an abandoned firehouse on West 141st Street in Manhattan, it’s an assemblage of some 300 discarded baby strollers Mr. Ward collected in the neighborhood around his Harlem studio. He ganged them together, bound by strips of fire hose into a large oval, turned down the lights and added some music: Mahalia Jackson singing “Amazing Grace.”

Seen in the New Museum’s annex at 231 Bowery, the piece evokes multiple images: a church interior, a slave ship, a hospital ward, some kind of Lourdes of the lost and found, where castoff strollers carrying the memories of children grown and departed get a new life in art. Unseen in New York since 1993, it’s a deep experience, and its setting on the Bowery, even the 2013 upscale Bowery, works.


“Amazing Grace” is by itself worth the admission price, but there’s also an impressive installation inside the museum, Pepón Osorio’s “Scene of the Crime (Whose Crime?).” This full-scale, minutely detailed fictional tableau suggesting the aftermath of violence in a Latino home was a highlight of the 1993 Whitney Biennial, the so-called political biennial. It is the 20th anniversary of that show, which prompted the idea for the New Museum’s “NYC 1993.”

There’s no question that the Biennial was significant, though less because it introduced new ideas than because it consolidated impulses already in the air. Another, genuinely groundbreaking exhibition, “The Decade Show: Frameworks of Identity in the 1980s,” had preceded it by three years. Organized by the New Museum, the Studio Museum in Harlem and the Museum of Contemporary Hispanic Art, now long gone, it had a mixed reception. Critics acknowledged its innovative political content but disdained a perceived lack of formal polish.


For its part the 1993 Whitney Biennial kept the content, or some version of it, and added up-to-the-minute M.F.A. polish. The result was a succès de scandale. Racial politics in Harlem was one thing; in a mainstream museum on the Upper East Side it was quite another. Extravagantly reviled by the press, the show wore the insults like badges of honor and did excellent box office.

Several artists who were in that Biennial — Matthew Barney, Robert Gober, Mike Kelley, Glenn Ligon, Charles Ray, Cindy Sherman — are also in “NYC 1993” with other work from the same year. Although their art is more than familiar now, you can still see what made it look novel and arresting then. Yet a little historical research provokes questions of how “political,” over all and in real-life terms, the show really was.


A point of comparison is another major multi-artist exhibition, from Los Angeles, that opened in New York two days before the Biennial. It was titled “CARA, Chicano Art: Resistance and Affirmation, 1965-1985,” and it too dealt with issues of race, sexuality and marginalized culture, often in forcefully polemical forms, with sources not in art schools but in the street. It was a gripping show. Few people saw it.

The Biennial was in Manhattan; the Chicano show at the Bronx Museum of the Arts. Within the art world’s political reference one show was a sensation, the other hardly there. This is true now. An elaborate timeline that the New Museum compiled for “NYC 1993” — it’s the show’s only example of intensive archival research; the catalog has almost none — makes no mention of the “CARA” show.


I’m not saying that the politics of the Biennial were inauthentic. I am saying that its now-privileged — exalted — position in history is skewed along lines of class and race. It’s the job of a retrospective show to change that perspective or at least question it, which “NYC 93” doesn’t do.

This flaw, however, takes nothing away from the individual works chosen by the show’s organizers: Massimiliano Gioni, associate director and director of exhibitions; Gary Carrion-Murayari, curator; Jenny Moore, associate curator; and Margot Norton, assistant curator. Although short on surprises their selection is well considered, and they mixed things in ways that make clear the issues that drove art at the time.


They’ve acknowledged, for example, the era’s focus on racial diversity and representation by including what is still today an usually high number of African-American artists for a New York group show. With the presence of Ida Applebroog, Lutz Bacher, Nicole Eisenman and Cady Noland they let us see that women were doing some of the most powerfully critical work of the time.

One timely section of the show, on the third floor, is basically about men shooting things: with guns, power tools, penises and words. A small second-floor space is devoted to a meditation on color. Kiki Smith’s black bronze nude “Virgin Mary” stands at the center, facing a photograph of a jaundice-skinned Hannah Wilke, sick with cancer. A yellowish-orange abstract painting by Byron Kim covers one wall; two black-and-white mosaic paintings by Jack Whitten flicker on another, their pieces reminding us that we’re in a predigital world.


The curators have also picked up on the mortality-consciousness of the time. AIDS is, one way or another, as omnipresent as it was in 1993. For many New Yorkers then it created a sense of perpetual catastrophe. It also produced a huge amount of art that is far too little known and could easily fill the New Museum’s five floors. There’s a show to do.

As it is we’re given two feature-length films, Gregg Bordowitz’s “Fast Trip, Long Drop” and Derek Jarman’s extraordinary “Blue,” along with some often-seen Nan Goldin photographs. In addition much of the fourth floor is reserved for Felix Gonzalez-Torres’s soft-focus photographic mural of two solitary birds winging through a cloudy sky. The gallery’s blinding-orange carpet (courtesy of the artist Rudolf Stingel) undercuts what surely meant to be a reflective ambience, but a beautiful 1993 sound piece, “Sail on Sailor,” by Kristin Oppenheim, helps sustain it.


Some things I could live without. A wall of Lina Bertucci’s glam photo portraits of artists is one; paintings by Elizabeth Peyton and John Currin another. Yes, they were emerging in 1993, but they’re part of a different, politically complacent era. The artists of the collective called Art Club 2000, photographed lounging around on Conran sofas and dressed in matching Gap grunge, are fun. But do they really rate a place of honor on the catalog cover? Maybe for this soft catalog, which consists of decades-old reprints and curatorial recollections of being a teenager in ’93.

Yet certain art from that 1993 Whitney show offers models of how to do better than this, how to light fires. As a commissioned Biennial project the Los Angeles artist Daniel J. Martinez redesigned the metal admission buttons worn by visitors to read, “I can’t imagine ever wanting to be white,” but with only a single word on each button, so you had to check out your fellow visitors to read the entire message. People were incensed, delighted, puzzled. Most important, they were reacting, thinking, getting a sense of themselves as performers in history.


Interestingly that piece was Mr. Martinez’s second proposal. The first one entailed inscribing another sentence on the museum’s Madison Avenue windows: “In the rich man’s house the only place to spit is in his face.” The Whitney said no.

Given an economy so often referred to as the 1 percent versus the 99 percent, and an art market staggeringly rich at the top and, through money, calling the historical shots, Mr. Martinez’s words seem more apt than ever. Apparently the New Museum thought so and decided to realize the original Whitney piece for this show. But it has sort of blown it. It has placed the inscription on a window far back in the lobby, where it’s easy to miss and the words are hard to read.


Why not on the Bowery window? What is there to fear? The possibility that the museum itself might be accused of being a rich man’s house? (One of its trustees, Dakis Joannou, has exhibited his collection here, has his name on a gallery and owns “Amazing Grace.”) So what? Put it there. (The museum says it had planned to put another piece in the window, then didn’t.) Inspire a conversation, a big one, about art and its many kinds of politics and who writes the stories, and why. That’s what we need from our museums and our sharp young curators on the scene today.