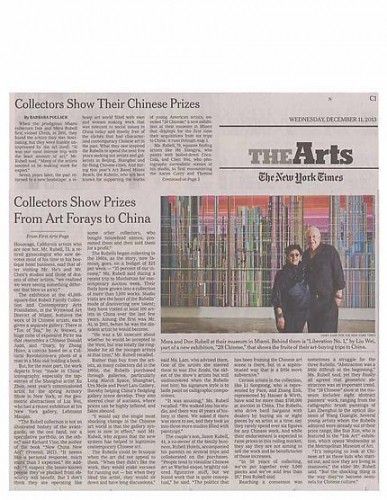 
When the prodigious Miami collectors Don and Mera Rubell first visited China, in 2001, they found the artists they met fascinating, but they were frankly unimpressed by the art itself. “It was our most intense trip with the least amount of art,” Mr. Rubell said. “Many of the artists seemed to be making work for export.”


Seven years later, the pair returned to a new landscape: a vibrant art world filled with men and women making work that was relevant to social issues in China today and mostly free of the clichés that had characterized contemporary Chinese art in the past. What they saw inspired the Rubells to spend the next five years seeking out artists and gallerists in Beijing, Shanghai and far-flung Chinese cities. And during this year’s Art Basel Miami Beach, the Rubells, who are best known for supporting the works of young American artists, unveiled “28 Chinese,” a new exhibition at their museum in Miami that displays for the first time their acquisitions from six trips to China; it runs through Aug. 1.


Ms. Rubell, 70, equates finding artists like He Xiangyu, who paints with boiled-down Coca-Cola, and Chen Wei, who photographs surrealistic scenes in his studio, to first encountering the Aaron Curry and Thomas Houseago, California artists who are now hot. Mr. Rubell, 73, a retired gynecologist who now devotes most of his time to his boutique hotel business, said that after visiting Mr. He’s and Mr. Chen’s studios and those of dozens of other artists, “we realized we were seeing something different that blew us away.”


The exhibition at the 45,000-square-foot Rubell Family Collection and Contemporary Arts Foundation, in the Wynwood Art District of Miami, features the work of 28 Chinese artists, each given a separate gallery. There is “Ton of Tea,” by Ai Weiwei, a huge cube of expensive Pu’er tea that resembles a Chinese Donald Judd, and “Diary, by Zhang Huan, a canvas based on a Cultural Revolution-era photo of a man in a Mao suit holding a book.


But, for the most part, the work departs from “made in China” iconography, especially the tapestries of the Shanghai artist Xu Zhen, next year’s commissioned artist for the spring Armory Show in New York, or the geometric abstractions of Liu Wei, who had a recent exhibition at his New York gallery, Lehmann Maupin.


“The Rubell collection is not an illustrated history of the avant-garde, on the one hand, nor a speculative portfolio, on the other,” said Richard Vine, the author of the book “New China New Art” (Prestel, 2011). “It seems like a personal response, much more than I expected.” He added: “I suspect the lesser-known people they’ve plucked from obscurity will benefit. But I don’t think they are operating like some other collectors, who bought household names, promoted them and then sold them for a profit.”


The Rubells began collecting in the 1960s, as the story, now famous, goes, on a budget of $25 per week — “25 percent of our income,” Ms. Rubell said during a recent trip to Manhattan for contemporary auction week. Their finds have grown into a collection of more than 5,000 works. Studio visits are the heart of the Rubells’ mode of discovering new talent; they have visited at least 100 artists in China over the last few years. Among the first was Mr. Ai, in 2001, before he was the dissident artist he would become.


“He was a bit insecure about whether he would be accepted in the West, but was totally the ringleader for all the younger artists at that time,” Mr. Rubell recalled.


Rather than buy from the artists, as many collectors did in the 1990s, the Rubells purchased through galleries, particularly Long March Space, Shanghart, Urs Meile and Pearl Lam Gallery, thereby helping China’s fledgling gallery scene develop. They also steered clear of auctions, where prices can be highly inflated, and fakes abound.


“I would say the single most shocking change in the Chinese art world is that the gallery system is now in effect,” said Mr. Rubell, who argues that the new system has helped to legitimize contemporary Chinese art.


The Rubells could be brusque when the art did not appeal to them. “When they didn’t like the work, they would make excuses for running out — but when they liked the artist, they would sit down and have long discussions,” said Ms. Lam, who advised them. One of the artists she steered them to was Zhu Jinshi, the oldest of the show’s artists but still undiscovered when the Rubells met him; his signature style is to ladle paint on calligraphic compositions.


“It was amazing,” Ms. Rubell recalled. “We walked into his studio, and there was 40 years of history in there. We asked if there was more to see, and they took us into three more studios filled with paintings.”


The couple’s son, Jason Rubell, 44, a co-owner of the family business, Rubell Hotels, accompanied his parents on several trips and collaborated on the purchases. “People tend to visualize Chinese art as Warhol-esque, brightly colored figurative stuff, but we found work that is quite conceptual,” he said. “The politics that has been framing the Chinese art scene is there, but in a sophisticated way that is a little more subversive.”


Certain artists in the collection, like Li Songsong, who is represented by Pace, and Zhang Enli, represented by Hauser & Wirth, have sold for more than $700,000 at auction in China. The Rubells, who drive hard bargains with dealers by buying six or eight pieces by an artist at a time, say they rarely spend over six figures for any Chinese work. And while their endorsement is expected to raise prices in this roiling market, they say they are not aiming to sell the work and be beneficiaries of those increases.


Reaching a consensus was sometimes a struggle for the three Rubells. “Abstraction was a little difficult at the beginning,” Ms. Rubell said, yet they finally all agreed that geometric abstraction was an important trend. The “28 Chinese” show at the museum includes eight abstract painters’ work, ranging from the calligraphic brush paintings of Lan Zhenghui to the optical illusions of Wang Guangle. Several young artists whom the Rubells admired were already out of their price range, like Sun Xun, who is featured in the “Ink Art” exhibition, which opens Wednesday at the Metropolitan Museum of Art.


“It’s tempting to look at Chinese art as these kids who started out, and now they are living in mansions,” the elder Mr. Rubell said. “But the shocking thing is the way they’ve become sentinels for Chinese culture.”