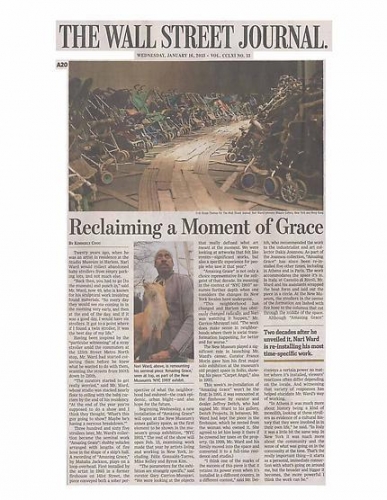 Reclaiming a Moment of Grace
By Kimberly Chou


Twenty years ago, when he was an artist in residence at the Studio Museum in Harlem, Nari Ward would collect abandoned baby strollers from empty parking lots, and not much else.

"Back then, you had to go [to the museum] and punch in," said Mr. Ward, now 49, who is known for his sculptural work involving found materials. "So every day they would see me coming in in the morning very early, and then at the end of the day, and if it was a good day, I would have six strollers. It got to a point where if I found a twin stroller, it was the best day of my life."


Having been inspired by the "particular witnessing" of a stray stroller amid the commuters at the 125th Street Metro North stop, Mr. Ward had started collecting them before he knew what he wanted to do with them, scanning the streets from 160th down to 116th.

"The curators started to get really worried," said Mr. Ward, whose studio was stacked nearly floor to ceiling with the baby carriers by the end of his residency. "At the end of the year you're supposed to do a show and I think they thought, 'What's this guy going to show? Maybe he's having a nervous breakdown.' "


Three hundred and sixty five strollers later, Mr. Ward's collection became the seminal work "Amazing Grace": shabby vehicles arranged with lengths of fire hose in the shape of a ship's hull. A recording of "Amazing Grace," by Mahalia Jackson, plays on a loop overhead. First installed by the artist in 1993 in a former firehouse on 141st Street, the piece conveyed both a sober perspective of what the neighborhood had endured—the crack epidemic, urban blight—and also hope for the future.

Beginning Wednesday, a new installation of "Amazing Grace" will open at the New Museum's annex gallery space, as the first element to be shown in the museum's group exhibition, "NYC 1993." The rest of the show will open Feb. 13, examining work made that year by artists living and working in New York, including Félix Gonzaléz-Torres, Mike Kelley and Byron Kim.


"The parameters for the exhibition are strangely specific," said curator Gary Carrion-Murayari. "We were looking at the objects that really defined what art meant at the moment. We were looking at artworks that felt like events—significant works, but also a specific experience for people who saw it that year."

"Amazing Grace" is not only a choice representative for the zeitgeist of that decade. Its meaning in the context of "NYC 1993" assumes further depth when one considers the changes its New York locales have undergone.


"This neighborhood has changed and Harlem has obviously changed radically, and Nari was watching it happen," Mr. Carrion-Murayari said. "The work does make sense in neighborhoods where there is social transformation happening, for better and for worse."


This week's re-installation of "Amazing Grace" won't be the first: In 1995, it was remounted at the firehouse by curator and dealer Jeffrey Deitch, who had signed Mr. Ward to his gallery, Deitch Projects. In between, Mr. Ward had kept the piece in the firehouse, which he rented from the woman who owned it. She agreed to let him keep it there if he covered her taxes on the property. (In 1999, Mr. Ward and his family moved into the space and converted it to a full-time residence and studio.)

"I think one of the marks of the success of this piece is that it retains its power even when it's installed in a different country, in a different context," said Mr. Deitch, who recommended the work to the industrialist and art collector Dakis Joannou. As part of the Joannou collection, "Amazing Grace" has since been re-installed five other times, including in Athens and in Paris. The work accommodates the space it's in. In Italy, at Castello di Rivoli, Mr. Ward and his assistants scrapped the boat form and laid out the piece in a circle. At the New Museum, the strollers in the center of the formation are lashed with fire hose to the columns that cut through the middle of the space.


Although "Amazing Grace" conveys a certain power no matter where it's installed, viewers' reactions often differ depending on the locale. And witnessing that variety of responses has helped elucidate Mr. Ward's way of working.

"In Athens it was much more about history being a kind of monolith, looking at these strollers as evidence of a cultural history that they were involved in in their own life," he said. "In Italy it was a little bit the same way. In New York it was much more about the community and the sense of what was going on in the community at the time. That's the really important thing—it starts as a personal, immediate connection with what's going on around me, but the broader and bigger it becomes, the more powerful I think the work can be."