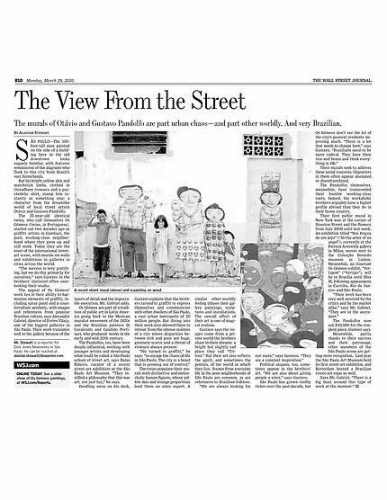 The View From the Street
By Alastair Stewart


São Paulo--The 100-foot-tall man painted on the side of a building here in the old downtown looks vaguely familiar, with features reminiscent of the migrants who flock to this city from Brazil's vast hinterlands.

But his bright yellow skin and matchstick limbs, clothed in threadbare trousers and a psychedelic shirt, stamp him instantly as something else: a character from the dreamlike world of local street artists Otávio and Gustavo Pandolfo.


The 35-year-old identical twins, who call themselves Os Gêmeos (twins, in Portuguese), started out two decades ago as graffiti artists in Cambuci, the poor, working-class neighborhood where they grew up and still work. Today they are the toast of the international street-art scene, with murals on walls and exhibitions in galleries in cities across the world.

"The success is very gratifying, but we do this primarily for ourselves," says Gustavo in the brothers' cluttered office overlooking their studio.


The appeal of Os Gêmeos' work lies in their ability to harmonize elements of graffiti, including spray paint and a counterculture aesthetic, with images and references from popular Brazilian culture, says Alexandre Gabriel, director of Fortes Vilaça, one of the biggest galleries in São Paulo. Their work translates well to the gallery because of the layers of detail and the impeccable execution, Mr. Gabriel adds.

Os Gêmeos are part of a tradition of public art in Latin America going back to the Mexican muralist movement of the 1920s and the Brazilian painters Di Cavalcanti and Candido Portinari, who produced works in the early and mid-20th century.


The Pandolfos, too, have been deeply influential, working with younger artists and developing what could be called a São Paulo school of street art, says Baixo Ribeiro, curator of a recent street-art exhibition at the São Paulo Art Museum. "They instilled a philosophy that this was art, not just fun," he says.

Doodling away on his desk, Gustavo explains that the brothers turned to graffiti to express themselves and communicate with other dwellers of São Paulo, a vast urban metropolis of 20 million people. But diving into their work also allowed them to retreat from the intense realities of a city where disparities between rich and poor are huge, greenery scarce and a threat of violence always present.


"We turned to graffiti," he says, "to escape the chaos of life in São Paulo. The city is a beast that is growing out of control."

The twins populate their murals with distinctive and melancholic human figures, whose yellow skin and strange proportions lend them an alien aspect. A similar other-worldly feeling infuses their gallery paintings, sculptures and installations. The overall effect of their art is one of magical realism.


Gustavo says the images come from a private world the brothers share in their dreams: a bright but slightly sad place they call "Tritrez." But their art also reflects the spirit, and sometimes the politics, of the world in which they live. Scenes from everyday life in the poor neighborhoods of São Paulo are common, as are references to Brazilian folklore.

"We are always looking for our roots," says Gustavo. "They are a constant inspiration."


Political slogans, too, sometimes appear in the brothers' art. "We are also about giving people a voice," says Gustavo.

São Paulo has grown visibly richer over the past decade, but Os Gêmeos don't see the lot of the city's poorest residents improving much. "There is a lot that needs to change here," says Gustavo. "Brazilians need to be more radical. They have their rice and beans and think everything is OK."


Their murals seek to address these social concerns. Characters in them often appear alienated or disenfranchised.

The Pandolfos themselves, meanwhile, have transcended their humble working-class roots. Indeed, the workaholic brothers arguably have a higher profile abroad than they do in their home country.


Their first public mural in New York was at the corner of Houston Street and the Bowery from July 2009 until last week. An exhibition titled "Nos braços de um anjo" ("In the arms of an angel"), currently at the Patricia Armocida gallery in Milan, moves next to the Colecção Berardo museum in Lisbon. Meanwhile, an itinerant Os Gêmeos exhibit, "Vertigem" ("Vertigo"), will be in Brasília until May 16, following appearances in Curitiba, Rio de Janeiro and São Paulo.

"Their work has been very well received by the critics and by the market alike," says Mr. Gabriel. "They are in the ascendant."


The Pandolfos now ask $40,000 for the simplest piece, Gustavo says.

Meanwhile, partly thanks to their success and their patronage, other members of the São Paulo scene are getting more recognition. Last year the São Paulo Art Museum held its first street-art exhibition, and Rotterdam hosted a Brazilian street-art expo as well.


Says Mr. Gabriel, "There is a big buzz around this type of work at the moment."

www.wsj.com
Back to Top