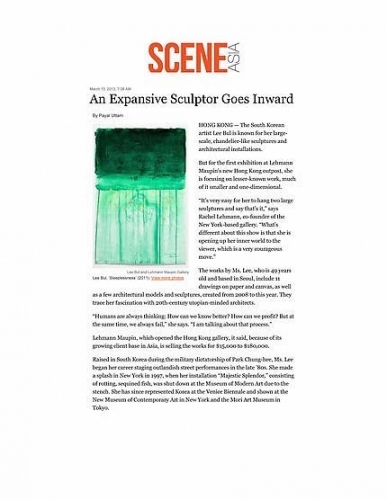 But for the first exhibition at Lehmann Maupin’s new Hong Kong outpost, she is focusing on lesser-known work, much of it smaller and one-dimensional.


“It’s very easy for her to hang two large sculptures and say that’s it,” says Rachel Lehmann, co-founder of the New York-based gallery. “What’s different about this show is that she is opening up her inner world to the viewer, which is a very courageous move.”

The works by Ms. Lee, who is 49 years old and based in Seoul, include 11 drawings on paper and canvas, as well as a few architectural models and sculptures, created from 2008 to this year. They trace her fascination with 20th-century utopian-minded architects.


“Humans are always thinking: How can we know better? How can we profit? But at the same time, we always fail,” she says. “I am talking about that process.”

Lehmann Maupin, which opened the Hong Kong gallery, it said, because of its growing client base in Asia, is selling the works for $15,000 to $180,000.


Raised in South Korea during the military dictatorship of Park Chung-hee, Ms. Lee began her career staging outlandish street performances in the late ’80s. She made a splash in New York in 1997, when her installation “Majestic Splendor,” consisting of rotting, sequined fish, was shut down at the Museum of Modern Art due to the stench. She has since represented Korea at the Venice Biennale and shown at the New Museum of Contemporary Art in New York and the Mori Art Museum in Tokyo.

The works veer from hard-edged sculptures to washes of color on paper. Many of the drawings evoke architectural forms. “Untitled: A Waterfall structure” shows a floating building with a gushing waterfall above it, acting as a roof. The crystalline composition of “Untitled (Structure for wraparound topography — flush)” suggests an island-like edifice.


The two sculptures, both untitled, are angular masses of stainless steel, wood and glass suspended in mid-air that Ms. Lee describes as “architectural planets” inspired by the architectural drawings of Bruno Taut.

One of the two untitled maquettes looks like a mountain range embedded with uneven architectural forms. Made of polyurethane and finished with gray brushstrokes, the sculpture looks as if it’s on the verge of collapse. It is “a model, in the broadest sense,” Ms. Lee says. “A necessarily imperfect imagining of an unrealizable world.”


Lee Bul’s exhibition is on view at Lehmann Maupin, Pedder Building, Central, until May 11.

Corrections & Amplifications: An earlier version of this article incorrectly referred to Ms. Lee as Ms. Bul.

www.wsj.com
Back to Top