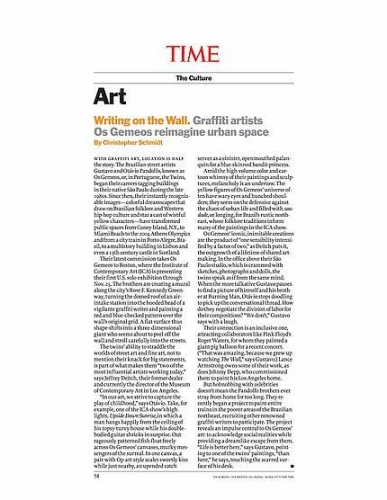 
With Graffiti art, location is half the story. The Brazilian street artists Gustavo and Otvio Pandolfo, known as Os Gemeos, or, in Portuguese, the Twins, began their careers tagging buildings in their native So Paulo during the late 1980s. Since then, their instantly recognizable images--colorful dreamscapes that draw on Brazilian folklore and Western hip-hop culture and star a cast of wistful yellow characters--have transformed public spaces from Coney Island, N.Y., to Miami Beach to the 2004 Athens Olympics and from a city train in Porto Alegre, Brazil, to a multistory building in Lisbon and even a 13th century castle in Scotland.

www.time.com
Back to Top