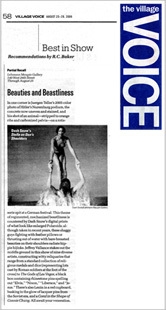 In one corner is Juergen Teller's 2005 color photo of Hitler's Nuremburg podium, the concrete now uneven and stained, and his shot of an animal - stripped to orange ribs and carbonized pelvis - on a rotisserie spit at a German festival. This theme of regimented, mechanized beastliness is countered by Dash Snow's digital prints of what look like enlarged Polaroids; although taken in recent years, these shaggy guys fighting with feather pillows or thrusting out of water with bare-breasted beauties on their shoulders radiate hippie hijinks. Jeffrey Vallance stakes out the middle ground in this show of nine diverse artists, constructing witty reliquaries that range from a standard collection of religious medals and dice (representing lots cast by Roman soldiers at the foot of the cross) to The Gods of Las Vegas, a black box containing rhinestone pins spelling out "Elvis," "Nixon," "Liberace," and "Jesus." There's also Lenin in a red cupboard, basking in the glow of lacquer pins from the Soviet era, and a Coral in the Shape of Connie Chung. All await your veneration.