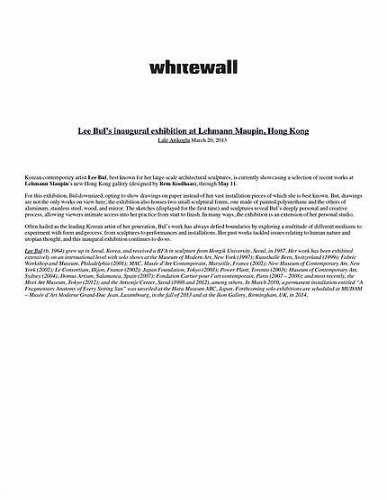 
For this exhibition, Bul downsized, opting to show drawings on paper instead of her vast installation pieces of which she is best known. But, drawings are not the only works on view here; the exhibition also houses two small sculptural forms, one made of painted polyurethane and the others of aluminum, stainless steel, wood, and mirror. The sketches (displayed for the first time) and sculptures reveal Bul’s deeply personal and creative process, allowing viewers intimate access into her practice from start to finish. In many ways, the exhibition is an extension of her personal studio.


Often hailed as the leading Korean artist of her generation, Bul’s work has always defied boundaries by exploring a multitude of different mediums to experiment with form and process: from sculptures to performances and installations. Her past works tackled issues relating to human nature and utopian thought, and this inaugural exhibition continues to do so.