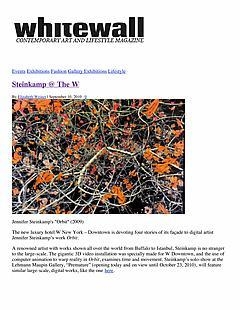 A renowned artist with works shown all over the world from Buffalo to Istanbul, Steinkamp is no stranger to the large-scale. The gigantic 3D video installation was specially made for W Downtown, and the use of computer animation to warp reality in Orbit, examines time and movement. Steinkamp’s solo-show at the Lehmann Maupin Gallery, “Premature” (opening today and on view until October 23, 2010), will feature similar large-scale, digital works, like the one here.

In honor of the W Downtown’s recent opening at 123 Washington Street and Steinkamp’s new exhibit, Orbit will be lit from 8 PM to midnight every night during fashion week (September 8-14).