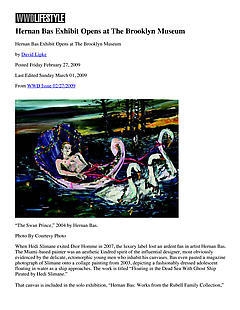 When Hedi Slimane exited Dior Homme in 2007, the luxury label lost an ardent fan in artist Hernan Bas. The Miami-based painter was an aesthetic kindred spirit of the influential designer, most obviously evidenced by the delicate, ectomorphic young men who inhabit his canvases. Bas even pasted a magazine photograph of Slimane onto a collage painting from 2003, depicting a fashionably dressed adolescent floating in water as a ship approaches. The work is titled "Floating in the Dead Sea With Ghost Ship Pirated by Hedi Slimane."??

That canvas is included in the solo exhibition, "Hernan Bas: Works from the Rubell Family Collection," that opens at The Brooklyn Museum today and runs through May 24. The show is an impressive milestone for Bas, who turns 31 this month, but the Miami-based artist has seen his star rise steadily since graduating from the New World School of Arts a decade ago. His overtly stylish depictions of androgynous youths, tinged with Gothic foreboding and referencing narratives of Oscar Wilde and Joris-Karl Huysmans, have been included in group shows at The Museum of Modern Art and the Whitney Museum of American Art in New York and London's Saatchi Gallery.??

"I grew up with the whole Abercrombie & Fitch ideal, and Hedi Slimane was the first designer who made clothes for skinny, awkward people like me," says Bas of his fixation with the former Dior designer. "I haven't been paying as much attention to fashion recently, but the last time I was wowed was with Lanvin. I think Alber Elbaz has picked up the torch of dandyism." ??

(The men's Lanvin collection is designed by Lucas Ossendrijver under Elbaz's direction.)??

Dandies are a recurring theme in Bas' oftentimes pathos-infused works, and when his protagonists aren't bare-chested, they're donning spiffy blazers, Victorian ruffs, sweater vests and harlequin bodysuits as they explore caves (the Hardy Boys inspired one series of paintings) or romantically row boats — although the artist says this is more about costume than fashion. "I don't use contemporary clothes. It's more like theater," he explains.??

Bas' work has previously caught the eye of Yvonne Force, the New York socialite and art impresario whose Art Production Fund hosted him at a summer residency program in Giverny, France. But the artist's biggest backers have been Don and Mera Rubell, whose star-studded private collection — Haring, Hirst, Koons, Kiefer, Prince, etc. — is housed in a 45,000-square-foot warehouse-cum-museum in Miami. (Don Rubell is the brother of the late Steve Rubell of Studio 54 fame.)??

"Hernan's work is very intimate and sensitive. Of course there's an element of exploring sexuality and gay identity, but his paintings also explore the vulnerability of youth in a way that is very universal," says Mera Rubell, who emigrated to the U.S. from Russia when she was 13. "I remember that feeling of vulnerability as a teenager, and that's what I see in his work."