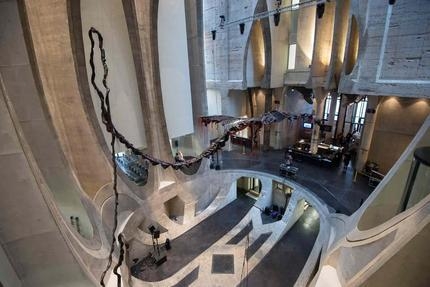 The sheer scale of the Zeitz Museum of Contemporary Art Africa is a statement. With undulating walls like a mountain fortress, the hulking 1920s grain silo on Cape Town’s Waterfront — once the tallest building south of the Sahara — reopens this week as the world’s largest museum of 21st-century art from the continent and its diaspora. Softly protruding “pillow” windows reflecting Table Mountain become a lantern at night.

A new beacon for art, Zeitz Mocaa will guide and dazzle. Inside the soaring space-age atrium, I watched installers suspended like astronauts alongside an airborne dragon of rubber inner-tubing, ribbon and bone. The mythological crooner of deathly Xhosa lullabies, created by the Capetonian Nicholas Hlobo for the 2011 Venice Biennale, is among the art the museum aims to preserve for the continent. The fate of the Benin bronzes is on the mind of its South African executive director and chief curator, Mark Coetzee, 53, “now that museums around the world have woken up to African art”. As important, it is meant as a catalyst for the continent’s artists and curators.

“It’s a public museum with a private collection,” Jochen Zeitz, 54, former chief executive of Puma, tells me. The German philanthropist has built his world-class collection with Coetzee since 2008, expressly to show it publicly “as a contribution”. Zeitz’s Segera Retreat in Kenya was their lab until the Victoria & Alfred Waterfront proposed the silo as a not-for-profit museum. “It’s not my museum or the Waterfront’s — it’s for Africa,” Zeitz says. “Africans need to come on board.” After the free opening weekend, for which 24,000 timed tickets were gone in nine minutes, entry will be free for under-18s and at various times every week for citizens of African countries.

Mindful of those who may never have entered an art museum, the British architect Thomas Heatherwick has devised a spectacular lure. The silo, once a hub for exporting maize, was abandoned in 2001. Rather than gutting the storage plant of its vertical tubes, an organic space was carved out of the pinkish concrete to form a cathedral-like atrium; the shape is precisely that of a grain of corn left in the silo, which Heatherwick’s team digitally scanned and enlarged, mapping it on to the interior to be cut away. Obliquely severed tubes overhead are held up by sleeves of fresh concrete, though pockmarks and rust have been painstakingly preserved.

Carving concrete with GPS tracking is “cutting-edge technology”, says David Green, chief executive of the V&A Waterfront, whose shareholders funded the Silo’s £35m renovation. Their joint venture with Zeitz underwrites operating costs. The museum’s nine floors are leased free for 99 years. The seed private collection is on loan for at least 20 years or Zeitz’s lifetime, while acquisition committees build a permanent core. But curators have been given scope to draw on loans, making this more than a display of one man’s collection.

Donations are flowing. William Kentridge is a strong supporter. The township-jazz soundtrack to his multi-screen puppet danse macabre “More Sweetly Plays the Dance” sounds discordantly through the galleries. Roger Ballen, the Johannesburg-based American photographer, donated his entire archive. A Christie’s fundraising auction, including works donated by El Anatsui and Yinka Shonibare, raised about £1.4m. The revered judge Albie Sachs sits on the board.

While the Centre for the Moving Image has cosy tubular booths, most of the numerous galleries are climate-controlled “white cubes” to secure Mocaa a place on the touring circuit. But several works dialogue with the silo. In the Dusthouse, which used to filter hazardous chaff, Shonibare’s patterned windows pick up the cathedral theme, matching the Indonesian batik in his film “Addio del Passato”, Verdi’s valedictory aria sung by Lord Nelson’s spurned Caribbean wife. In the transport tunnels, Edson Chagas’s “Luanda, Encyclopaedic City” is on show for the first time since it made him Africa’s first winner of the Golden Lion at Venice in 2013. The atrium’s circular skylights are vertiginously transparent floor panels in the rooftop sculpture garden, inscribed by the Togolese artist El Loko before he died last year.

The building’s industrial past adds resonance to All Things Being Equal, a group show of more than 40 artists. Isaac Julien’s nine-screen installation “Ten Thousand Waves”, a moving response to the drowning of 23 Chinese cockle-pickers in Morecambe Bay, finds an echo in “The Waves” by Liza Lou, an American artist in Durban, whose 1,194 panels of tiny chalk beads are striated with the weavers’ sweat and toil. “In the Midst of Chaos There Is Opportunity”, a marvellously heroic installation by the South African Mary Sibande, has a battalion of women in combats — modelled on the artist’s mother, a domestic worker — riding hobby horses past snarling red hounds and vultures.

A strategy has been to collect artists’ oeuvres, to enable the museum, in Zeitz’s words, to “tell the artist’s story”. While this approach risks leaving artists out, it bears fruit in two solo shows. Kudzanai Chiurai is known for photographs of staged dioramas satirising power and masculinity in Robert Mugabe’s Zimbabwe, from which he fled. Regarding the Ease of Others, a mid-career retrospective curated by Azu Nwagbogu, casts new light with early paintings and charcoal drawings. In Material Value, photographs capture performances in an empty Mozambican bullring by Nandipha Mntambo from Swaziland, who is at once matador, bull and spectator. Dresses sculpted from cured cow-hide shaped by her body probe the boundaries we construct between animality and human sexuality, attraction and repulsion.

A small room of painting curated by Xola Mlwandle exemplifies the museum’s ambition. Six works range from the Ghanaian Jeremiah Quarshie’s realist portrait of “Auntie Dedei” seated on yellow plastic containers, and the Congolese Chéri Samba’s surrealist satire, to the American Kehinde Wiley’s naturalism, and the British Chris Ofili’s abstract “Blue Steps”. In disparate styles, these paintings hold conversations in art across what the scholar Paul Gilroy has termed the Black Atlantic — and beyond.

In a museum devoted to art since 2000, history is always in the frame. The Madagascan Joël Andrianomearisoa has petal-like fragments of silk saris hanging alongside sepia ancestral photographs. Lungiswa Gqunta’s “Divider”, with 130 beer bottles hanging from wicks, alludes to petrol bombs. The Sowetan Mohau Modisakeng’s self-portraits suggest priest-like exorcisms of a violent legacy using pangas and sjamboks as props.

Other powerful photographic portraiture ranges from Zanele Muholi’s defiant images of lesbian survivors of “corrective rape”, to the Tunisian Mouna Karray in a sack, her thumb holding the camera’s remote release like a detonator; bound, invisible, yet grasping the power to represent herself. Coetzee was repeatedly challenged in the run-up: “Where am I in this museum?” These shows offer oblique and unexpected answers.

That Mocaa was founded on the vision of four white men (only one of whom is African) has not escaped its critics. In the city that produced the Rhodes Must Fall campaign, it will remain under scrutiny. Yet these opening shows demonstrate what many western art institutions have been slow to recognise: that a diverse curatorial staff makes for surprising and challenging art. A museum that can inspire new audiences not only to create and appreciate art, but also to tell its story, could augur a true shift in power.