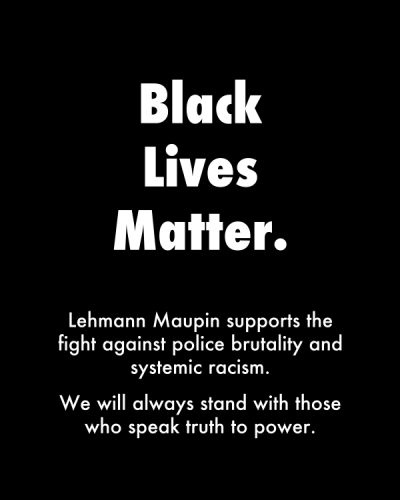 Black Lives Matter.
Lehmann Maupin supports the fight against police brutality and systemic racism. We will always stand with those who speak truth to power.

We are horrified by the recent murders of George Floyd, Ahmaud Arbery, Tony McDade, Sean Reed, Breonna Taylor, and the many who suffered and died before them. This must end. We are committed to work to bring about change.

In support of Black Lives Matter, Lehmann Maupin has donated to the following organizations: NAACP Legal Defence & Educational Fund, Black Lives Matter, Black Visions Collective, and Art for Justice Fund. These are just some of the many organizations doing important work for social justice. We encourage you to educate yourself, to give as you are able, and to get involved. For those looking to take action, you can find resources listed below. Please also visit BlackLivesMatter.com to learn more.

Black Lives Matter
#BlackLivesMatter was founded in 2013 in response to the acquittal of Trayvon Martin’s murderer. Black Lives Matter Foundation is a global organization in the U.S., U.K., and Canada, whose mission is to eradicate white supremacy and build local power to intervene in violence inflicted on Black communities by the state and vigilantes.

Black Visions Collective
A Black-led, Queer- and Trans-centering organization whose mission is to organize powerful, connected Black communities and dismantle systems of violence.

Black Women’s Blueprint
Promotes and organizes black liberation through a feminist lens. “Our purpose is to take action to secure social, political, and economic equality for Black women in American society now.”

Brooklyn Community Bail Fund
Community-based nonprofit that pays criminal bail and immigration bonds for individuals who have been arrested while protesting police brutality.

Color of Change
The largest online racial justice organization in the United States, helping people respond effectively to injustice in the world. As a national online force driven by 1.7 million members, Color of Change moves decision-makers in corporations and government to create a more human and less hostile world for Black people in America.

Foodbank NYC
Food Bank For New York City has been working to end food poverty in the five boroughs for over 35 years. They are the city’s largest hunger-relief organization, who employ a multifaceted approach centered on helping low-income New Yorkers overcome their circumstances and achieve greater independence. This is an organization that helps to address some of the structural inequalities at play everyday in this city—one of the most pressing of which is food insecurity.

I Run With Maud
GoFundMe supporting the family of Ahmaud Arbery.

Liberty Fund NYC
First city-wide charitable bail fund. Dedicated to reducing number of New Yorkers who are subjected to pretrial detention because of bail costs, and providing resources to those clients after bail is posted.

Minnesota Freedom Fund
Community-based nonprofit that combats the harms of incarceration by paying bail for low-income individuals who cannot afford to do so and who have been arrested while protesting police brutality. [Please note that due to a massive influx of donations, the Minnesota Freedom Fund is currently asking that donations be redirected to organizations doing work in the field. A list of suggested organizations is available on their website.]

NAACP Legal Defence & Educational Fund (LDF)
The first civil and human rights law firm in the United States. Founded in 1940 under the leadership of Thurgood Marshall, who subsequently became the first African-American U.S. Supreme Court Justice, LDF was launched at a time when the nation’s aspirations for equality and due process of law were stifled by widespread state-sponsored racial inequality. From that era to the present, LDF’s mission has always been transformative: to achieve racial justice, equality, and an inclusive society.

National Bail Out Collective
Black-led and Black-centered collective of abolitionist organizers, lawyers and activists building a community-based movement to support our folks and end systems of pretrial detention and ultimately mass incarceration. Also coordinates Mama’s Day Bail Outs every year so black mothers and caregivers so they can spend mother’s day with their families.

Reclaim the Block
Coalition that advocates for and invests in community-led safety initiatives in Minneapolis neighborhoods.

In addition to the organizations listed here, there are a number of public Google Docs like this one that compile links to organizations, petitions, and fundraising efforts contributing to the Black Lives Matter movement.

Justice For Tony McDade Petition
Official petition demandaning justice for Tony McDade, who was a transgender black man killed by police in Tallahassee.

The US has a big racism problem and the art world is not helping
The Art Newspaper, by Margaret Carrigan
June 1, 2020

A boot is crushing the neck of American democracy
The Guardian, by Cornel West
June 1, 2020

It Is Time for America to Confront Its Tortured Racial Past
Smithsonian Magazine, by Lonnie G. Bunch III
May 31, 2020

The Deep Amnesia of Our National Conscience
The New Republic, by Osita Nwanevu
May 30, 2020

1619
An audio series from The New York Times on how slavery has transformed America, connecting past and present through the oldest form of storytelling.

Lynching In America: Confronting the Legacy of Racial Terror
Equal Justice Initiative has documented the lynchings of over 4,000 African Americans between 1877 and 1950. In this series, hear how this era of racial terror lynchings continues to shape America to this day.

Intersectionality Matters with Kimberlē Crenshaw
Intersectionality Matters!, a new podcast hosted by Kimberlé Crenshaw, is an idea travelogue that brings the concept of intersectionality to life by highlighting the work of leading activists, artists, and scholars, exploring the hidden dimensions of some of today’s most pressing issues, and helping listeners understand politics, the law, social movements, and even their own lives in deeper, more nuanced ways.

Code Switch
Fearless conversations about race from NPR. Hosted by journalists of color, the podcast tackles the subject of race head-on, exploring how it impacts every part of society—from politics and pop culture to history, sports, and everything in between.