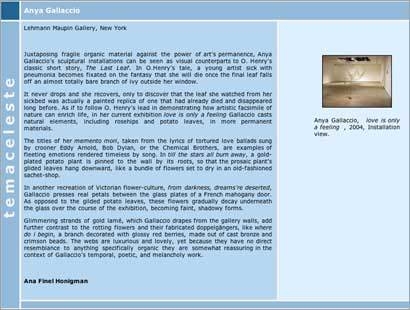 Juxtaposing fragile organic material against the power of art's permanence, Anya Gallaccio's sculptural installations can be seen as visual counterparts to O. Henry's classic short story, The Last Leaf. In O.Henry's tale, a young artist sick with pneumonia becomes fixated on the fantasy that she will die once the final leaf falls off an almost totally bare branch of ivy outside her window.

It never drops and she recovers, only to discover that the leaf she watched from her sickbed was actually a painted replica of one that had already died and disappeared long before. As if to follow O. Henry's lead in demonstrating how artistic facsimile of nature can enrich life, in her current exhibition "love is only a feeling" Gallaccio casts natural elements, including rosehips and potato leaves, in more permanent materials.

The titles of her memento mori, taken from the lyrics of tortured love ballads sung by crooner Eddy Arnold, Bob Dylan, or the Chemical Brothers, are examples of fleeting emotions rendered timeless by song. In "till the stars all burn away," a gold-plated potato plant is pinned to the wall by its roots, so that the prosaic plant's glided leaves hang downward, like a bundle of flowers set to dry in an old-fashioned sachet-shop.

In another recreation of Victorian flower-culture, "from darkness, dreams're deserted," Gallaccio presses real petals between the glass plates of a French mahogany door. As opposed to the gilded potato leaves, these flowers gradually decay underneath the glass over the course of the exhibition, becoming faint, shadowy forms.

Glimmering strands of gold lamé, which Gallaccio drapes from the gallery walls, add further contrast to the rotting flowers and their fabricated doppelgängers, like "where do i begin," a branch decorated with glossy red berries, made out of cast bronze and crimson beads. The webs are luxurious and lovely, yet because they have no direct resemblance to anything specifically organic they are somewhat reassuring in the context of Gallaccio's temporal, poetic, and melancholy work.