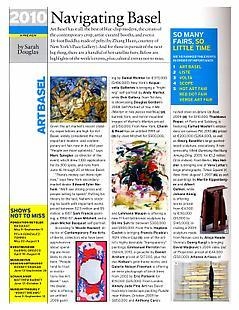 Art Basel has it all: the best of blue-chip modern, the cream of the contemporary crop, artist-curated booths, and even a 16-foot Buddha made of pelts (by Zhang Huan, courtesy New York's Pace Gallery). And for those in pursuit of the next big thing, there are a handful of hot satellite fairs, Below are highlights of the week's events, plus cultural extras not to miss.

Given the art market's recent stability, expectations are high for Art Basel, widely considered the most important modern- and contemporary-art fair, now in its 41st year. "People are more optimistic," says Marc Spiegler, co-director of the event, which drew 1,100 applications for its 300 spots, and runs from June 16 through 20 at Messe Basel.

According to Nicole Hackert, director of Contemporary Fine Arts, of Berlin, collectors who have been apprehensive about spending are more likely to do so here. "People tend to trust in institutions like Art Basel," says the dealer, who is offering an untitled 2009 painting by Daniel Richter for $496,000. New York's Acquavella Galleries is bringing a "fright wig" self-portrait by Andy Warhol, white Dvir Gallery, from Tel Aviv, is showcasing Douglas Gordon's 2008 Self-Portrait of You +Me (Marilyn in two pieces red/blue), burned, torn, and mirror-mounted images of Warhol's Marilyn, priced at $150,000. From New York, Cheim and Read has an untitled 1959 oil by Joan Mitchell for $900,000, and Lehmann Maupin is offering a new 11-foot-tall bronze sculpture by Do-Ho Suh for between $300,000 and $500,000. From Paris, Hopkins Custot is bringing Francis Plcabla's 1929 Villica-Caja, one of the artist's highly desirable "transparency" paintings; Emmanuel Perrotin has Ostrich. 2010, a gouache by Daniel Arsham priced at 517,000, plus the duo Kolkaz's gold-frame works; and Galerie Nelson Freeman is offering an eerie photograph of birch trees from 2002 by Eric Poitevin for €19,OOO ($25,000). From London, Annely Juda Fine Art has David Hockney's landscape painting Puddle near Kilham, October 2005 for 5850,000 and Anthony Caro's rusted-steel sculpture Up Beat, 2009, for $110,000. Thaddaeus Ropac, of Paris and Salzburg, is featuring Farhad Moshiri's embroidery-on-canvas Pill, 2010, priced at €200,OOO ($264,000), as well as Georg Baselitz's large painted wood sculpture, evocatively, if nonsensically, titled Dunklung Nachtung Amung Ding, 2009, for €1.2 million ($1.6 million). From Berlin, Max Hetzler is bringing one of Vera Lutter's large photographs, Times Square VI, New York: August I, 2007, as well as paintings by Martin Kippenberger and Albert Oehlen, while Johann Konig is offering works priced from €4,500 to €110,OOO ($5,900 to $145,000), including a 2009 sculpture made from Nissan cars by Alicja Kwade. Vienna's Georg Kargl is bringing David Maljkovic's 2009 video Out of Projection, priced at €44,OOO ($58,000). Alfonso Artiaco, of Naples, has an untitled 2009 Jannis Kounellis piece, made of wood, gold leaf, nets, coats, and other materials and priced at €500,000 ($659,000), as well as Gilbert & George's 2008 Jack Wheel, for f.108,000 ($164,000). Stockholm's Andrehn-Schiptjenko is bringing a new Marilyn Minter painting priced at $150,000. Among the finds at New York's Sperone Westwater is a 2009 painting of motorcycle racers by Malcolm Morley, priced at $350,000, and a spiny abstract metal sculpture by Not Vital, Unpleasant Object, 2008, priced at $120,000. At New York's Paula Cooper, look for early works by Yayoi Kusama. "Art Basel is always important but this year particularly so, because there is a shift in perception of quality, and people are more discriminating," says Cooper.

In Art Unlimited, the hangarlike hall used for oversized projects, check out Dan Flavin's whole-room installation of six arcs of fluorescent light tubes (9), which hasn't been displayed since a retrospective at the National Gallery of Canada in 1969, the year it was made. It's from New York dealer David Zwirner, who in his booth has pieces from the Helga and Walther Lauffs collection, including Yves Klein's 1960 Anthropometrie (ANT 110) and Lucio Fontana's 1962 Concetto spaziale.

Basel changes its tried and true formula ever slightly each year. New for 2010 is Art Feature, 20 booths displaying single or pairs of artists who need not be young (unlike in the Art Statements section, where the Los Angeles gallery David Kordansky will have a new installation by Rashid Johnson). First timer Alexander Gray, of New York, is bringing work by Jack Whitten, who has been painting since the 1960s. Another innovation is Art Parcours, curated by Jens Hoffman, featuring one night of site-specific installations and performances around town.

Brussels dealer and fair participant Rodolphe Janssen encapsulates Art Basel's appeal: "It's not about parties, like Art Basel Miami Beach; it's not about hedge-fund managers, like Frieze; it's not about chic, like FIAC. The location is not convenient-there aren't enough good hotels and there are no major airports. It's a place for art lovers."