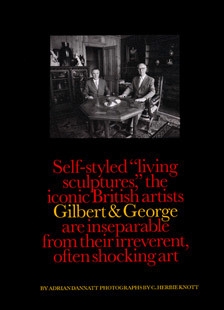 In the Studio
Self-Styled "living sculptures" the iconic British Artists Gilbert & George are inseperable from their irreverent, often shocking art
By Adrian Dannatt

"WE'VE NEVER BEEN TO VENICE, though the English are fond of it. That's what we don't like about Venice, the English." Gilbert & George, the infamously provocative artistic duo, are relishing their occupation of the British pavilion during this year's Venice Biennale. "Everyone always thought we were too dangerous or difficult to be given the pavilion, but we survived without it," say the artists, who speak as one persona. lt's just as well we didn't do Venice back in the 1970s orwe could be forgotten by now."

Gilbert & George (or G&G, as they are fondly known throughout Britain) are far from forgotten. A collection of conversations between the artists and Paris-based critic FranÃ§ois Jonquet has recently been published by Phaidon, and they have been the subject of several gallery and museum exhibitions in the past year. In addition to the Biennale, the Kestner Gesellschaft in Hannover is featuring 20 of their recent works through July17, and last fall, the New York galleries Sonnabend and Lehmann Maupin held well-received concurrent exhibitions. "Our New York shows were the most financially successful we ever had," they say.

Both shows, titled "Perversive Pictures," featured the photo-based works the pair have been making since the late â€˜70s. As in most of their works, the artists' likenesses figure prominently, set alongside charged imagery and text that often deal with homosexuality, race, class and other social issues. In the large-scale "Perversive Pictures," the artists are juxtaposed with graffitilike fragments of Islamic script and slogans such as "abolish commodity, create community" and "white bastards," inspired directly by street-level political statements scrawled around London, where they live.

The artists' visual presence in their works is fundamental to the understanding that for them, art and life are inseparable. This thinking is an extension of their performative works of the late 1960s and early â€˜70s, in which they declared themselves "living sculptures" and posed on pedestals in galleries. The political has never been far from the personal in Gilbert & George's practice. Although their tableaux are organized within a regular grid format, they focus on decidedly less tidy behaviors, like sex and defecation. Series titles include "New Horny Pictures," from 2001, and "Naked Shit Pictures," first shown in 1995. Those cartoonlike but vividly realistic images depict their nude selves alongside giant human feces. Any amusement or shock elicited by the works does not completely erase the sense of vulnerability and poignancy of their all-too-human subject matter.

In Venice Gilbert & George will explore familiar territory with new imagery. Their theme for the pavilion, "Ginkgo Pictures," involves images of ginkgo leaves emblazoned across a series of 25 photo-panels, some nearly 14 feet high. The fanlike, repeated shape of the foliage surrounds and sometimes overlaps the portraits of Gilbert & George, who share these busy compositions with urban teenagers, Arabic script and images of London streets. "We took some 500 ginkgo leaves from trees in Gramercy Park in New York back to our studio to photograph." They are having special ginkgo suits tailored for the opening festivities. "We find the ginkgo trees fascinating-- the female leaves smell of shit. Why should that be?"

Life continues after the Biennale, of course. "What we're looking forward to even more than Venice is being given an entire floor of the Tate Modern in February 2007," say the artists. "They first offered us the Tate Britain, but we said we wouldn't even consider it." Gilbert & George did show there in the past, when they won the Turner Prize in 1986 (and were on the short list two years before).

The duo have become something of a national institution. Conservatively dressed in their trademark matching bespoke suits, Gilbert & George are practically a tourist attraction in Spitalfields, the historic area of East London they have long made both their home and the subject of their art. (The socially charged graffiti visible throughout the neighborhood inspired their iconic "Dirty Words Pictures" of 1977.) Now highly gentrified, Fournier Street was a slum when they bought their first house there, number 12, back in 1967. At a time when people couldn't care less about those handsome Georgian properties, the pair lovingly restored every detail of their five-floor residence, built in 1720, retaining its original wood paneling and filling it with eclectic objects and antiquities.

Those who know the artists only through their often shocking works might find their refined domestic taste something of a surprise. The somber paneled chambers of their home are filled with period furniture, books and decorative arts. Not only were Gilbert & George early collectors of the Victorian designer Christopher Dresser (a large 2003 show of his work in Turin was culled mainly from their collection), they are also experts on other 19th-century architects and designers such as William Burgess, E.W. Godwin and Augustus Pugin. The art in their collection includes a 19th-century apocalyptic print by John Martin, Indian Tantric works, a 16th-century English painting on wood of a beautiful androgynous figure, and The Flaming Ramparts of the World, a 1910 painting by Basil Reginald Holwood, the inspiration for the artist Basil Hallward in Oscar Wilde's Picture of Dorian Gray. What is not on display? "We've never hung a picture by us in the house," they say.

George (who was born George Passmore in Devon in 1942) also has an extensive collection of printed sexual material, from novels to police reports-- "man-on-man only," as he puts it briskly. Meanwhile, Gilbert (born Gilbert Proesch in the Italian Dolomites in 1943) helps curate their innumerable embossed vintage children's books, as well as a Theosophical library with rarities by Annie Besant, Madame Blavatsky and Krishnamurti.

All of this makes their high-tech studio the more unexpected: In a setting worthy of a James Bond movie, the 18th-century house conceals a gleaming, pristine art laboratory accessible through the backyard. The artists bought that space, originally a garment sweatshop, along with the house, and purchased one adjoining building, then another, and converted them into a very large, continuous studio. "Ten years ago, we bought the third space and an original house, number 8, came with it. So we are restoring it exactly as it would have been in the 18th century. House restoration is our second favorite hobby." It is perhaps best not to ask about their first.

The cavernous studio complex is outfitted with banks of new digital hardware, scanners, giant printers and serried drying racks. At the ripe age of 60 or so, Gilbert & George have awakened to the potential of technology. "It's only very recently that computers could do all this for us, because we need special machines with a lot of memory and a minimum of three gigabytes." As before, when they used traditional photographic processes, the pictures are made in sections that can be framed and transported separately.

Despite their new, computerized efficiency, making a picture is still an elaborate process. The studio walls are covered with hand written charts that function as an index of archived images, which are organized in a library of contact sheets. "We take thousands of photographs on an old-fashioned camera, because digital film shows all the pixels when you blow it up."

They sort through contact sheets and select images, from which an assistant makes very high-resolution scans. Then they begin working up a composition onscreen, a method they consider akin to "making a sketch in traditional terms." The chosen panels are printed on four outsize machines, dry mounted by a 300-year-old printing company in London, and framed and boxed for shipment. "And we never see them again. They're off to the museums and galleries."

However radical or naughty their subject matter may be, those museums and galleries are clearly keener than ever on whatever Gilbert & George choose to produce, even their most "difficult" and mural-scale pictures are now finding eager collectors, As they continue to explore shocking or controversial subjects in increasingly complex ways--the "Ginkgo Pictures" are among their most visually layered and intricate to date-- the artists look toward the future of art making with their newfound means. "We love computers," they say excitedly. "This process feels like an extension of our brain, you can adjust things until the end, and with technology nothing is fixed. It's so much easier to fulfill your dreams."