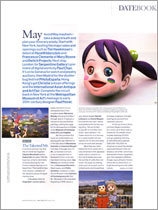 It would be wrong to say that the art world has forgotten Takashi Murakami and his Kaikai Kiki disciples. Still, the hype has certainly died down, no doubt allowing the new Chinese market darlings to be heard from. This month in New York, however, members of the Japanese group are again making noise.

A Murakami show at Gagosian's uptown gallery marks the artist's muchanticipated move from longtime dealer Marianne Boesky. Running from May 1 through June 9, it features a mixture of new and familiar paintings, setting the stage for his retrospective in October at the Museum of Contemporary Art, Los Angeles.

But the premiere that many art world insiders are paying particular attention to is the solo show of Masakatsu Iwamoto at Lehmann Maupin from May 3 through June 23. Mr., as Iwamoto is known, is one of several artists in Murakami's inner circle who have been making waves: Aya Takano just closed an exhibition at Emmanuel Perrotin's Miami space, and Chiho Aoshima created an installation for Boston's new Institute of Contemporary Art. But Mr.-Murakami's first assistant, beginning in 1995, about a year before dealers Rachel Lehmann and David Maupin first met the two men-seems best positioned to be the next big thing. "We are thrilled to give Mr. his first New York show," says Lehmann. "He makes sense for us in the way he is exploring the self and identity. He is in line with many artists we work with already." More than any other Kaikai Kiki front-runner, Mr. is fully immersed in the Japanese otaku culture, centered on the cult of adolescence and the worship of Lolita-like characters. He began by drawing anime girls on receipts, but his hottest works are his paintings and large sculptures of brighteyed figures plucked from Japanese cartoons.

At the last Armory Show, Lehmann Maupin presented four works, all of which sold, as teasers for this exhibit, which includes drawings ($1,500, and up), paintings (starting at $45,000) and sculptures ($80,000-150,000). An American museum has already expressed interest in the centerpiece, one of Mr.'s enormous, disembodied heads of pigtailed girls. This example is different, though, says Lehmann: Visitors will be able to climb into it, virtually becoming one with otaku culture.