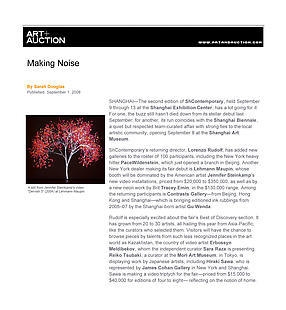 SHANGHAI—The second edition of ShContemporary, held September 9 through 13 at the Shanghai Exhibition Center, has a lot going for it. For one, the buzz still hasn't died down from its stellar debut last September; for another, its run coincides with the Shanghai Biennale, a quiet but respected team-curated affair with strong ties to the local artistic community, opening September 8 at the Shanghai Art Museum.

ShContemporary's returning director, Lorenzo Rudolf, has added new galleries to the roster of 100 participants, including the New York heavy hitter PaceWildenstein, which just opened a branch in Beijing. Another New York dealer making its fair debut is Lehmann Maupin, whose booth will be dominated by the American artist Jennifer Steinkamp's new video installations, priced from $20,000 to $350,000, as well as by a new neon work by Brit Tracey Emin, in the $130,000 range. Among the returning participants is Contrasts Gallery—from Beijing, Hong Kong and Shanghai—which is bringing editioned ink rubbings from 2005–07 by the Shanghai-born artist Gu Wenda.

Rudolf is especially excited about the fair's Best of Discovery section. It has grown from 20 to 30 artists, all hailing this year from Asia-Pacific, like the curators who selected them. Visitors will have the chance to browse pieces by talents from such less recognized places in the art world as Kazakhstan, the country of video artist Erbossyn Meldibekov, whom the independent curator Sara Raza is presenting. Reiko Tsubaki, a curator at the Mori Art Museum, in Tokyo, is displaying work by Japanese artists, including Hiraki Sawa, who is represented by James Cohan Gallery in New York and Shanghai. Sawa is making a video triptych for the fair—priced from $15,000 to $40,000 for editions of four to eight— reflecting on the notion of home.