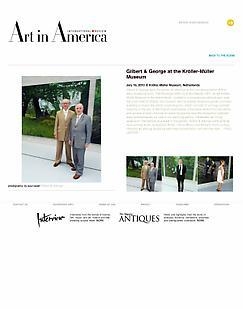 Gilbert & George were the center of attention at the rare presentation of their early sculptural work, The Paintings (With Us in the Nature) 1971, at the Kröller-Müller Museum in the Netherlands. Located in a picturesque national park near the small town of Otterlo, the museum and its outdoor sculpture garden provided a setting to match the artists' pastoral piece, which consists of six huge painted triptychs of the duo in the English countryside. Ephemeral works from the period and several of their charcoal on paper sculptures from the museum's collection were simultaneously on view in an adjoining gallery. Celebrated as "living sculptures" themselves at a toast in the garden, Gilbert & George were quite at ease among works by Auguste Rodin, Henry Moore and Richard Serra as they charmed an adoring audience with lively conversation well into the night.