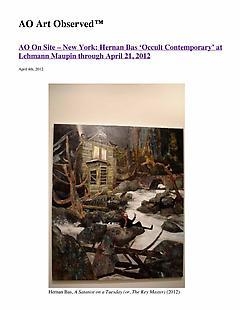 Detroit-based artist Hernan Bas’ new show Occult Contemporary is on now at Lehmann Maupin, the exhibition consisting of Bas’ most recent body of work: a group of paintings in various sizes depicting dark, fairytale-like scenes. The name of the show is a reference to “Adult Contemporary,” a term used to describe a category of popular music. The subject of the show itself, as reflected in the title, is inspired by the appearance of the occult in all forms of popular media, including those geared towards children and young adults. Bas displays a strong fascination with the supernatural, his paintings loaded with whimsical imagery.

The artist’s color palette and thickly applied layers of paint compliment the dark-edged, brooding imagery. Each piece has a rich romantic flair, reflective of the artist’s interest in the Baroque, Classical, and Romantic periods in art and literature. Bas is outspoken about the literary imagery in his paintings and the influence of composer Giuseppe Tartini and poet Baudelaire on his work, and in particular, on this exhibition. There are also a number of Biblical themes and references present; images of the devil constitute a thematic presence throughout this body of work. The title of the painting The Expulsion is a reference to Satan’s fall from Heaven, and the piece comes complete with a visual depiction of the devil falling down through the sky.

Bas’ work has been exhibited in many international solo and group exhibitions including the 2007 retrospective at the Rubell Family Collection in Miami, FL, which then traveled to the Brooklyn Museum of Art the following year. His work was also featured at the 53rd Venice Biennale and in a group show at the Andy Warhol Museum. His recent solo exhibitions include prestigious venues such as the Frederic Snitzer Gallery in Miami and Peter Kilchman in Zurich.