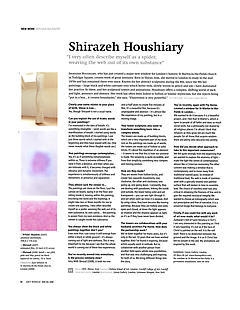 Shirazeh Houshiary
"I very often describe myself as a spider ,weaving the web out of its own substance"

SHlRAZEH HOUSHIARY, who has just created a major new window for London's historic St Martin-in-the-Fields church in Trafalgar Square, creates work of great intensity. Born in Shiraz, Iran, she moved to London to study in the mid 1970s and has remained there ever since. Known for her abstract sculptures during the 80s, since the 90s her paintings - large black and white canvases over which hover veils, slowly woven in pencil and ink - have dominated her practice. In these, and her sculptural towers and animations, Houshiary offers a complex, shifting world of dark and light, presence and absence. Her work has often been linked to Sufism or Islamic mysticism, but she rejects being "put in a box... it creates boundaries," she says. "Elusiveness is very powerful."

Clearly your name relates to your place of birth, Shiraz in Iran ...
Yes, though Shirazeh is not a usual name.

Can you explain the use of Arabic words in your paintings?
I'm interested in the idea of breath. It's something intangible - (and) words are like a manifestation of breath. I started using words as the building block of my paintings. I use just three words which I started with in the beginning and they have stayed with me. [She never reveals what these illegible words are.]

Your paintings encourage contemplation...
Yes, it's as if something metamorphoses within us. There is extreme stillness if you view it from a distance, and then when you are intimate with it, it becomes charged with vibrancy and dynamic movement. The experience is simultaneously of stillness and movement, or presence and separation.

They almost suck the viewer in ...
The paintings are done on the floor, I put the canvas on board, laying it on the floor and sitting inside it, moving within the painting, inscribing the word and the markings. It might take two or three months for me to create one painting. I very often describe myself as a spider, weaving the web out of its own substance, its own saliva ... the painting is woven from my own existence. And so the viewer is caught inside this substance.

You always show the black and white paintings together, don't you?
Even now that I use colour it will emerge from either a black or white ground - it's always coming out of light and darkness. This is very important to me, because I see that the whole world is coming out of these two experiences.

You've recently moved into animations. Is the process similarly slow?
Very. With Shroud (2008), it took me one-and-a-half years to create five minutes of film. It's a beautiful film, because it's ungraspable and abstract - it's almost like the experience of my painting, but in a moving image.

Your tower sculptures also seem to transform something basic into a complex whole.
The towers are made up of building blocks, which are a very important part of my work. Just as the paintings are made up of words, the towers are made out of hollow or solid bricks. It's about the repetition of an element - it seems to me that this is how our universe is made. The simplicity is quite incredible, and from that simplicity something very complex and moving evolves.

How are they made?
They are woven from hollow bricks, and create two opposite movements, one clockwise, the other anti-clockwise, one going up, one going down. Constantly, they are dealing with paradoxes, linking the inside and outside, the tower being solid and yet transparent - you can see right through it and yet when seen up close it is opaque. And by using colour, they have become like moving paintings. Because they are hollow and solid, open and closed, at times the light appears as shadow and the shadow appears as light, so it's as if they have never been divided.

The towers are collaborations with your husband, architect Pip Horne. How does the partnership work?
We've been together for many years, but it's only in the last 10 years that we have worked together. And I've found it inspiring, because artists usually work in solitude. But to collaborate with another person from another field opens whole new possibilities, and that was very challenging and inspiring for both of us. We bring different things into the story.

You've recently, again with Pip Horne, created a window for St Martin-in-the-Fields in London...
We wanted to do it because it is a beautiful project, and I feel that St Martin's, which is open to people of all faiths and does so much social work, has a philosophy not shared by all religious places. I'm afraid I think that religions as they grow old are much like people: for all those that acquire wisdom there are plenty who descend into senility.

How did you decide what approach to take to this important commission?
We felt quite strongly from the beginning that we wanted to explore the anatomy of light - make the light the centre of contemplation, almost like a Cistercian monastery. The other concern was making a window that is contemporary, and to move away from traditional stained glass. So instead of traditional lead, the web is made of stainless steel with a specially treated shot peened surface that will darken in time to resemble lead. The choice of stainless steel was also critical in obtaining the fineness of line and to give the required structural integrity. We wanted to choose an iconography which was not prescriptive and free of narrative. It is a universal image that belongs to everyone.

Finally, if you could live with any work of art ever made, what would it be?
Zurbaran's Veil of Saint Veronica (1631). I am very interested in this painting as I find it very haunting. It's not as if the face of Christ is painted on the veil: it is the veil itself. There is no distinction between the ground and the image. It is as if Christ has left his breath in the veil. My animations are inspired by this work.

Exhibition: Lisson Gallery, London, 29 May-26 Jul; www.lissongallery.com; the window in St Martin-in-the-Fields is a permanent installation, now on view