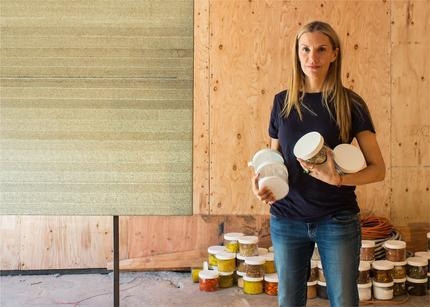 IN COLLABORATION: INTERVIEW WITH LIZA LOU
BY BRITTANY DALE

Through her trademark medium of glass beads, Los Angeles-based artist Liza Lou, challenges conventional artistic methods. Lou rose to prominence through her monumental sculptural installation, Kitchen (1991–96) for which she meticulously covered the entire surface of a life-sized American kitchen in tiny glass beads. In 2005, she established a studio in KwaZulu-Natal, South Africa, to work with local artisans, and continues to divide her time between South Africa and her studios in California.

Her debut solo exhibition in Hong Kong, “ingxube,” at Lehmann Maupin showcases the intricacies and technique of her chosen medium through six beaded canvases produced in 2015 in collaboration with her studio in South Africa. ArtAsiaPacific recently had the opportunity to interview Lou and discuss her artistic process, her most recent works and the possiblity of art instilling social change.

In your works, glass beads essentially replace paint. Is this something that you always intended to do?

Yes, I’ve always seen beads as an alternative form of paint, a way of applying color.  It’s a paint that you can’t dilute with water or blend with turpentine to get another shade. With the “Ingxube” paintings, I was interested in developing a process to transform this material, which is solid and impermeable, into something that appears fluid and paint-like.

What initially drew you to this medium?

There is the color and amazing luminosity of the material itself, but more than anything, I love the process it requires. There is a sense of chaos and big-time tweaky control that glass beads demand.

In 2005 you established a studio in South Africa, working with Zulu women. What inspired this move? How has it helped you to develop your practice?

I asked myself if it was possible for my art-making process to affect social change. South Africa presented the opportunity to work within a community that valued my art material but was one under extreme social stress. Beads have deep historical significance and it was wonderful to work with a group of women with whom I could share so much. Being in South Africa has expanded my appreciation of beauty to include things that are imperfect or cracked, streaked and stained, and to embrace mistakes. Working within a community has increased my commitment and regard toward the plight of women. I am touched by the beauty and grace of the women I have been privileged to work with, and by their joy and laughter.

The title of your current exhibition at Lehmann Maupin, “Ingxube,” is a Zulu word that loosely translates to mean “random” or “mixture,” which is fitting considering the way in which these works are produced. Can you elaborate a little on your method of production?

It’s a long process. The beads are made to-order in Japan, after which, each woven canvas requires 28 people to work on, including myself. I then mix the colors in an enormous bucket—a painstaking process of trial and error.  Afterward, the beads are weighed and handed out to the women I work with. I ask that they sew them to specific lengths, using a stich whereby beads are attached one at a time using needle and thread. Weeks later, the strips are completed, and I set about composing them into a painting, which is then sewn together and then stretched over a steel stretcher frame.

The resultant “canvases” have been labeled as “minimalistic” and “abstract.” Do you identify with these labels?

Yes and no. There is the slow and painstaking process of my work that is embedded with everyday life; the sweat and oils of the hand, and then there is this very serene and perhaps minimalist outcome. They are abstract, but there’s a lot of South African landscape embedded in them, too—each canvas is named after the township where the women who worked on them is from. I’m interested in all of those contradictions.

In light of this, how would you define your practice as an artist? Where do you draw inspiration?

It would be hard for me to define my practice—I try to stay open to change. I draw a lot of inspiration from poetry and literature. The “Ingxube” works are informed by minimalism, but I was also thinking a lot about [Georges] Seurat and the French Impressionists.

Your works touch on a range of social themes such as labor, confinement and protection. Can you comment on this?

Glass beads are a material which has strong social resonance among indigenous people around the world and working within a labor-intensive practice gives me a sense of solidarity with laborers, but I’m equally interested in making something beautiful, and in having an art practice that is full of joy. [Marcel] Duchamp said, “Have fun, otherwise you will bore us.” Words I try to live by.

ArtAsiaPacific
Back To Top