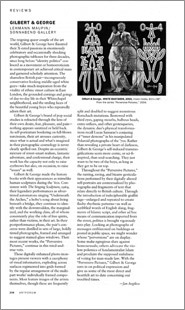 The reigning queer couple of the art world, Gilbert & George have flaunted their X-rated passions in enormously celebratory and occasionally shocking photographic tableaux for three decades, since long before "identity politics" coalesced as a movement or homoeroticism in contemporary art achieved critical mass and garnered scholarly attention. The shameless British pair - incongruously conservative-looking middle-aged white guys - take much inspiration from the vitality of ethnic street culture in East London, the grounded comings and goings of day-to-day life in their Whitechapel neighborhood, and the smiling faces of the beautiful young boys who repeatedly adorn their art.

Gilbert & George's brand of pop social studies is refracted through the lens of their own desire, fear, pleasure, and pain – nothing appears sanitized or held back. As self-portraiture bordering on full-blown narcissism, their art arouses curiosity, since what is actual and what's imagined in their pictographic cosmology is never clearly spelled out. Despite an eccentric mixture of street-smart realism, fantastic adventure, and confessional charge, their work has the capacity not only to raise eyebrows but also, on occasion, to raise "issues" as well.

Gilbert & George made the history books with their appearances as mimelike human sculptures during the '60s. Consistent with The Singing Sculpture, 1969, their legendary performances as silver-tinted automatons singing "Underneath the Arches," a hobo's song about living beneath a bridge, they continue to identify with the downtrodden, the marginalized, and the working class, all of whom consistently play the role of free spirits, rather than victims, in their art. In their post performance phase, the pair's concerns were distilled in sets of large, boldly tinted photographs, framed and arranged to suggest stained-glass windows. Their most recent works, the "Perversive Pictures," continue in this tried-and-true vein.

These digitally enhanced photo montages present viewers with a cacophony of visual information, exploding across surfaces regimented into grids formed by regular arrangement of the multi-part works' individually framed components. Most feature images of the artists themselves, though these are frequently split and doubled to suggest monstrous Rorschach mutations. Bestowed with third eyes, gaping mouths, bulbous heads, extra orifices, and other grotesqueries, the dynamic duo's physical transformations recall Lucas Samaras's conjuring of "inner demons" in his manipulated Polaroid photographs of the '70s. Rather than revealing a private heart of darkness, Gilbert & George's self-induced transmogrifications seem more cosmic, or sci-fi inspired, than soul-searching. They just want to be two of the boys, as long as they get to be on top.

Throughout the "Perversive Pictures," the ranting, raving, and bizarre gesticulations performed by their digitally altered self-portraits are contextualized by photographs and fragments of text that relate directly to British culture. Through the introduction of indecipherable graffiti tags-enlarged and repeated to create flashy rhythmic patterns-as well as scribbled words of English slang, fragments of Islamic script, and other ad hoc means of communications imported from the street, politics is brought vigorously into play. Looking at photographs of messages emblazoned on buildings or posted in public space, we might wonder whose "perversions" are on display. Some make egregious slurs against homosexuals: others advocate the violent polemics of fundamentalist Islam and proclaim the supposed sinfulness of voting for man-made law. With the "Perversive Pictures," Gilbert & George zero in on political expression and give us some of the most direct and heartfelt art to date concerning our troubled times.